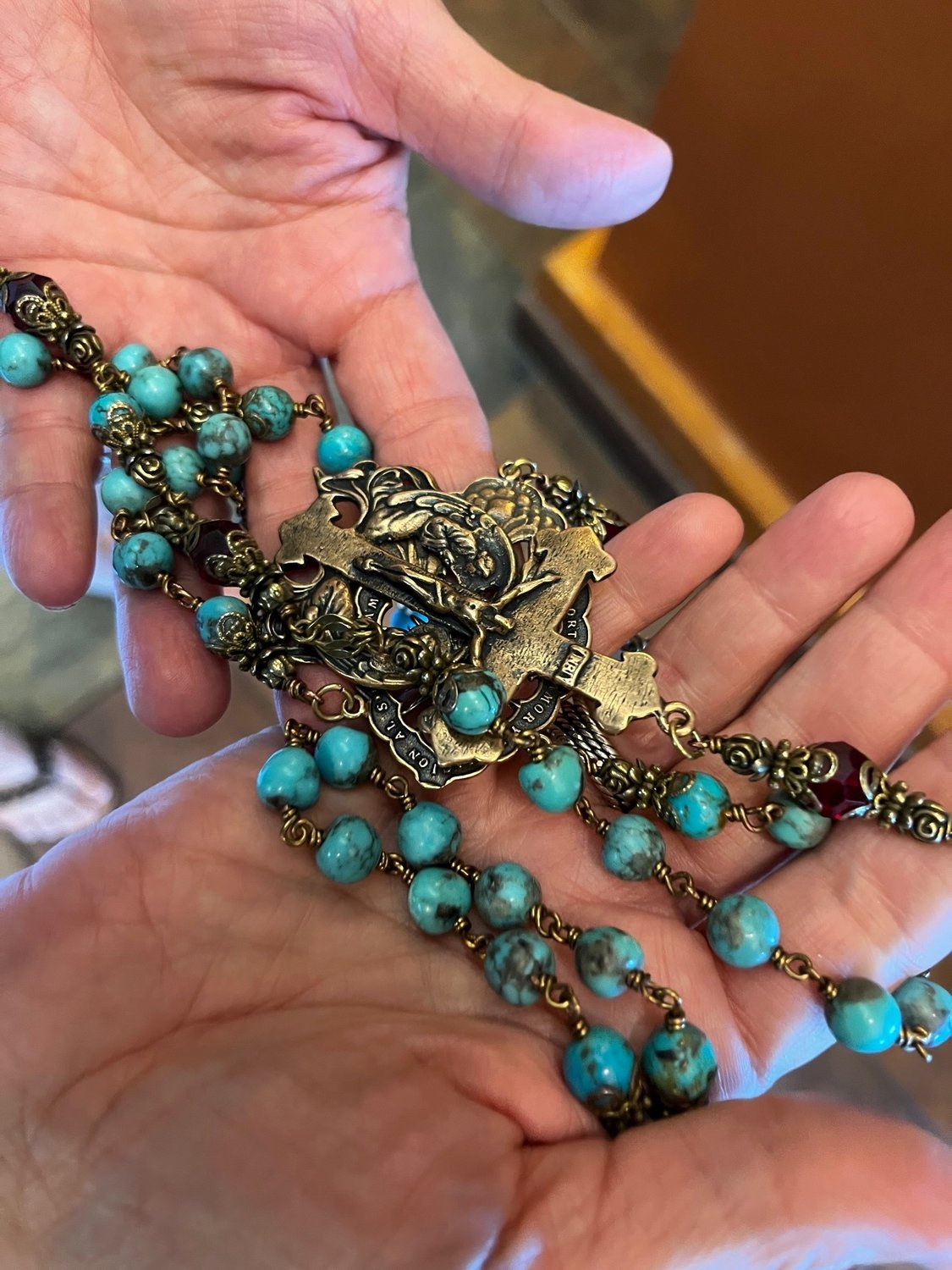 This rosary chain, custom made for Lupe Rodriguez-Jaramillo, is identical to the one she had made several years ago by an artisan in Santa Fe. When it was made, she had lots of extra turquoise left over and, “for some reason, I hung onto the extra,” she said. When her son, SFC Antonio Rey Rodriguez, died in combat in Afghanistan in 2020, she wanted him to be buried with the original rosary. She later took the extra turquoise back to the artisan, who crafted this duplicate, which she carries with her constantly. A golf tournament takes place today at New Mexico State University Golf Course, a fundraiser for Rodriguez’s memorial scholarship and foundation, the Antonio Rey Rodriguez Foundation, www.arrfoundation.org.
BULLETIN PHOTO BY RICHARD COLTHARP 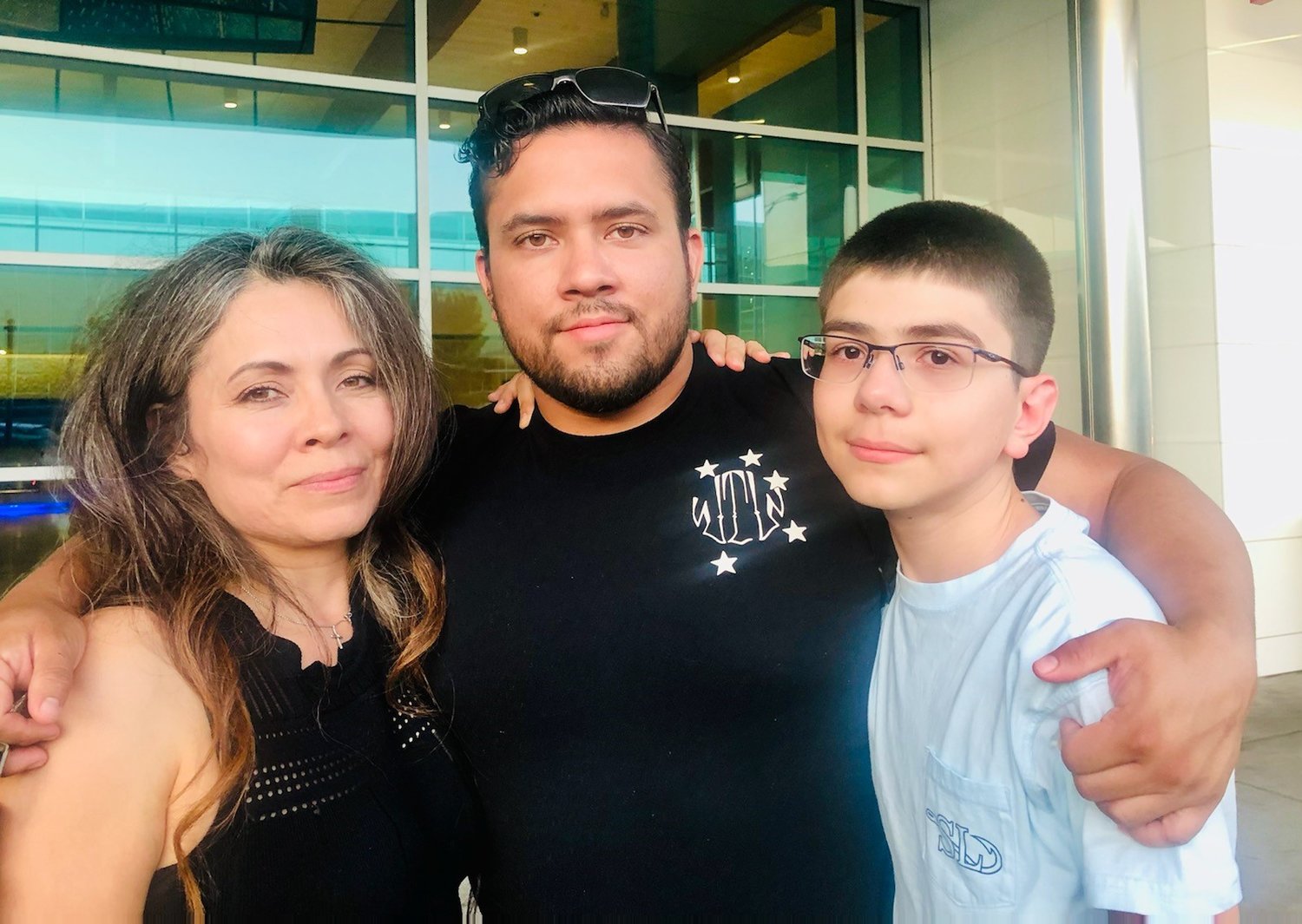 Lupe Rodriguez-Jaramillo with her sons
Courtesy photo
Previous Next
Posted Tuesday, May 3, 2022 4:04 pm
By Richard Coltharp

I recently met a mom who, like so many mothers, doesn’t take enough credit for the job she’s done raising two sons. Lupe Rodriguez Jaramillo, a 1989 graduate of Mayfield High School, grew up in the San Ysidro area just north of Las Cruces.

“I was a single mom, raising my little boy Antonio, but I got so much help and support from my parents (Reymond and Celia Rodriguez) and my brother, Jaime,” Lupe said

Fourteen years later, Lupe had another son, Christopher James Rodriguez-Jaramillo. This time, help, support and love also came from Christopher’s big brother, Antonio. Despite the age gap, or maybe because of it, the brothers had a special bond from the beginning.

This Sunday, Lupe will wish her mom, Celia, “Happy Mother’s Day.” She will also say a prayer to St. Anthony and St. Christopher, the namesake saints of her two sons.

But she’ll also get phone calls and hugs from her many other “sons,” members of the U.S. Army’s 3rd Ranger Battalion, 75th Ranger Regiment.

Why the soldiers? Well, there’s a catch to this Happy Mother’s Day story.

Antonio Rey “Rod” Rodriguez won’t be able to hug Lupe Sunday, or even give her a phone call.

Antonio went to Mayfield High School, just like his mom, graduating in 2009. Even as a middle schooler at Holy Cross Catholic School, Antonio knew he wanted to be a Ranger.

He was in ROTC at Mayfield, and as he got older, Lupe took him to recruiters from every military branch, even though his only interest was being an Army Ranger.

“I wanted him to understand all of the options,” Lupe said.

Before long though, Antonio was helping her understand. They learned the Ranger Creed together, and they ran the canals north of Mayfield to get in shape.

After graduation, as it neared time to officially commit to the Army, Antonio taught her something more painful.

“Mom, I know the job I’m going to do as a Ranger is dangerous, and it comes with a lot of risk,” he said.

“Great. Now you want me to sign?” she responded.

It’s one thing to want to be a Ranger.

It’s something else entirely to become one.

Antonio enlisted in the fall of 2009, and headed to training in Fort Benning, Georgia. He completed basic training, airborne courses and the grueling Ranger Assessment and Selection Program, achieving his dream in 2010.

For the next 10 years, he received multiple decorations, traveling the world on highly classified assignments. Lupe couldn’t know where and what he was doing, and probably didn’t want to.

“I sent cookies to I don’t know how many different countries,” Lupe said, “But always the address was just an APO.”

Before the assignments, Antonio would call and ask his mother to pray for him and his fellow Rangers. She could only pray for initials, as he couldn’t divulge their names.

Lupe called Antonio her “little boy,” even though he grew to be 6 feet tall and a muscled-up 225 pounds, one of the baddest of badasses in all the U.S. military.

But the badass, and the little boy who always remained inside him, is frozen now at age 28. On Feb. 8, 2020, he died from wounds sustained during combat operations Afghanistan.

You may remember the day later that month, when Antonio’s hearse was taken through Las Cruces and greeted by an overwhelming outpouring of honor and support. His Ranger brothers in attendance had never seen anything like it.

“What town does this?” one of them asked.

“You talk to your kids about doing the right things, and you pray it will reach them,” Lupe said. “But I really didn’t know all of what Antonio did until he was gone. I had all these people calling me: ‘Rod did this for me; Rod did that for me.’ He was always helping people. That he did these things makes me very proud.”

Though devastated by her son’s death, Lupe felt a calling. Antonio’s legacy of help, support and love could continue.

“That couldn’t be it, what happened over there,” she said.

Lupe was determined a scholarship be set up in Antonio’s name before 2020 was out. Mission accomplished. The SFC Rodriguez Scholarship, available through New Mexico State University, has already helped three recipients.

To fund the NMSU scholarship, as well as future projects to help other Rangers and their families, Lupe and her husband, Javier Jaramillo, created the Antonio Rey Rodriguez Foundation.

To learn more, go to www.arrfoundation.org.

There’s a golf tournament today, May 6, a fundraiser for the foundation. Though Antonio is interred in Arlington National Cemetery, and the Jaramillos now live in North Carolina, they knew the tournament had to be in Las Cruces where, already, many businesses and individuals have given to the cause.

“We needed to do it in Las Cruces,” Lupe said of the fundraiser at the NMSU Golf Course.