Aggie football ready for some action 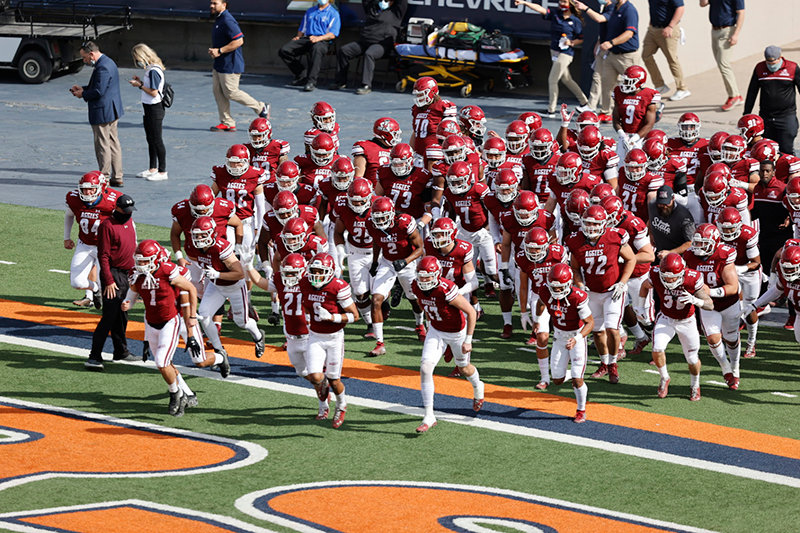 The New Mexico State University football team is ready to get back into action after nearly two years without meaningful football games.
Photos courtesy of NMSU 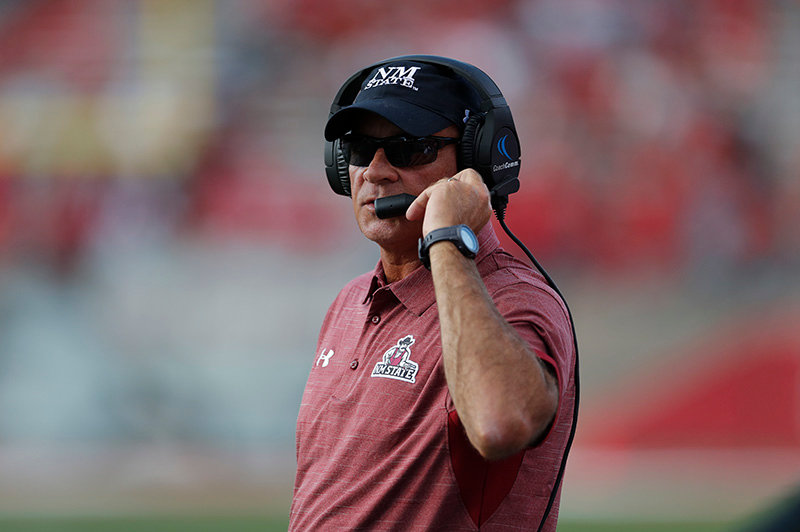 Head coach Doug Martin said they are hoping that they would get back to a bowl game this year.
Photos courtesy of NMSU
Previous Next
Posted Thursday, August 5, 2021 10:59 pm
By Dave Burge

After nearly two years without playing meaningful football games, New Mexico State University is hungry to get back to work and play some football.

The Aggies began spring practice on July 30 and open up the season at home against archrival UTEP on Aug. 28.

This past spring, the Aggies played two games after having their entire fall season canceled because of the Covid-19 pandemic.

“We are just excited to be back playing, more than anything,” NMSU head coach Doug Martin said in an interview before fall practice kicked off.

“That year off was really hard on our players. Us and Connecticut are the only FBS teams that had to go through that and didn’t play for a season,” Martin explained. “I don’t think people realize: Not only did we miss the games, we weren’t allowed to practice for year.”

Martin said they treated their two spring games – against Tarleton State and Dixie State – more like exhibitions. At the time, they were allowed to practice in New Mexico but had to play the games at the UTEP’s home stadium, the Sun Bowl, in front of 50,000 empty seats.

“A normal spring practice, you only get 15 practices (under NCAA rules). Had we not played the games, we would have only had gotten in 15 days of practice and been off for a year,” Martin said.

They ended up getting in almost 40 practices because of their abbreviated spring season, he said.

“We weren’t worried about winning them; we wanted to get everyone back on the field and acclimated,” he said.

Martin hopes that will pay big dividends when the Aggies kick off their 2021 season.

He said his players have put in a great summer, working on their strength and conditioning.

“It is one of the best groups we have ever had in terms of the work ethic,” Martin said. “The leadership has been great. I think they are really excited, really excited about getting back to practice. I’m looking forward to coaching these guys.”

Martin led the Aggies to the school’s biggest win in a half-century when they beat Utah State 26-20 in December 2017 to win the Arizona Bowl in Tucson. It was the Aggies’ first bowl game and first bowl victory in 57 years.

“The people in Las Cruces have been great,” said Martin, who has been the Aggies’ head coach since 2013. “The pinnacle of it was getting to the bowl game, winning it and seeing the impact it had on the community and how much it meant to the people here. It was remarkable. It is something that will always be imprinted on my mind. That is why we have such a hunger to do it again.”

Martin said they have been struggling to replace the starting quarterback, Tyler Rogers, from that 2017 team. He said they have two strong candidates this year – in Weston Eget, a redshirt freshman from California, and Jonah Johnson, junior transfer from Fresno (California) City College.

Martin described offensive tackle Sage Doxtater, a redshirt senior who is originally from Canada, as a potential third-round NFL draft pick. He also said that the Aggies will be much improved in the skill positions on offense and much faster on both sides of the ball.

“We certainly feel that we are capable of getting back to a bowl game again,” Martin said. “That would be two in the past four seasons. That would be remarkable for this place, considering the last one was the first one in 57 years.”

That’s the beauty of football in August: Everyone is undefeated and the upcoming season is full of hope and promise.