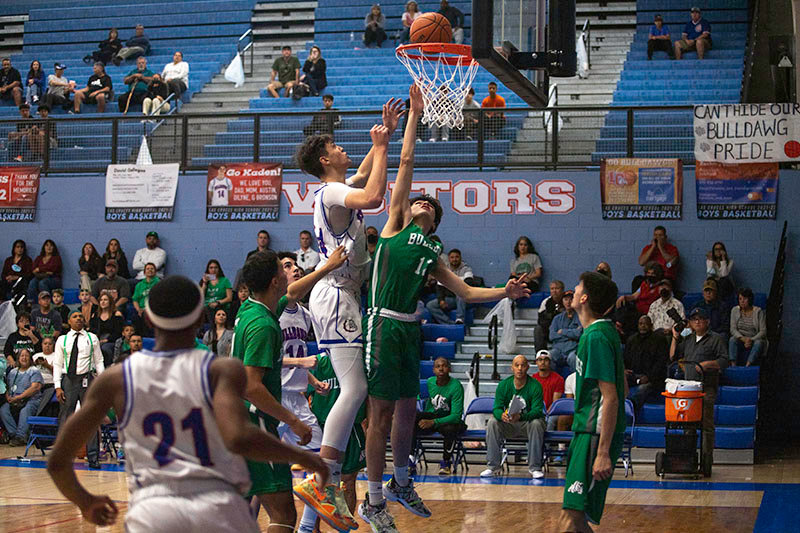 The Las Cruces High boys basketball team beat Albuquerque High 84-34 in the opening round of the 5A state playoffs.
PHOTO BY TABITHA ROSSMAN
Posted Tuesday, March 8, 2022 4:46 pm
By Dave Burge

It wasn’t quite how the New Mexico State University men’s basketball team would have scripted it in a perfect world, but they will take the result.

Heading into the final week of the regular season, all the Aggies needed was one win to clinch a share of the WAC championship and more importantly the top seed in the conference tournament. But the Aggies suffered a road loss to Chicago State Feb. 26 and then a home loss to Stephen F. Austin March 2.

And the Aggies responded with a 62-46 win. The Aggies finished at 14-4 in the WAC, 24-6 overall and tied for first place with Seattle U and Stephen F. Austin.

“It wasn’t certainly how we drew it up, and I'll have to come to grips with that,” head coach Chris Jans said shortly after the win and subsequent on-court celebration. “I’m proud of the guys’ effort tonight. I thought we played pretty darn well for the most part.”

Sixth-year senior Johnny McCants, an Oñate High School product, played his final game in front of the hometown fans and it was a memorable one.

McCants finished with a double-double (11 points and 13 rebounds). In addition to his double-double, McCants added four assists, three blocked shots and a steal. With the win, McCants added to his program-best career win total (119) and became the first NM State player in program history to win four regular-season championships.

McCants also asked his girlfriend Samantha Melendez to marry him after the game at center court.

“What a storybook -- hometown boy, proposing to his future wife at center court after an illustrious career,” Jans said. “It is like a movie.”

As of this writing, five Las Cruces area high-school basketball teams remain alive in the state playoffs after the first round March 4-5.

Check LasCrucesBulletin.com for the latest scores and results.