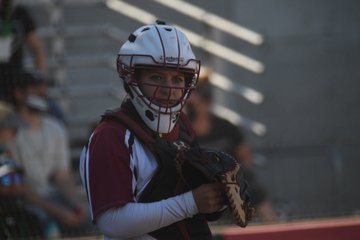 NMSU catcher Nikki Butler and the rest of the Aggies bounced back with a strong effort against Grand Canyon.
NMSU file
Posted Friday, May 14, 2021 4:48 pm
Dave Burge

The New Mexico State University softball team stayed alive in the single-elimination WAC tournament with a 6-2 win over Grand Canyon on Friday afternoon in Seattle.

The regular season champs and top-seeded Aggies had lost to Utah Valley in the opening round on Thursday.

Friday, the Aggies were led by Chloe Rivas who scattered six hits over seven innings and allowed just one earned run.,

At the plate, Hailey Tanori and Hope Banales both had two hits, while Ramsay Lopez and Nikki Butler both homered.

The Aggies will play again tonight in Seattle at 8 p.m. against the loser of Seattle U and Utah Valley.