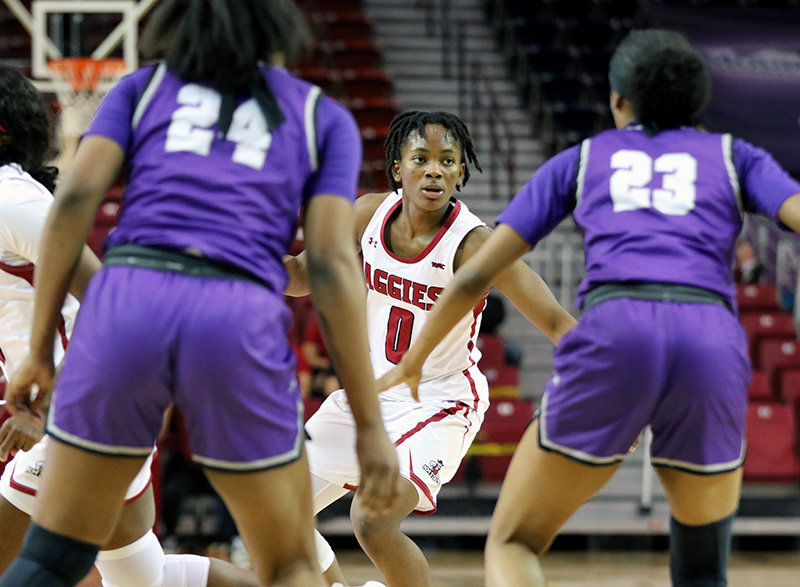 NM State came to within three points of Grand Canyon on Saturday afternoon as they fell, 46-43, in the Pan American Center. The Aggies were led in the scoring column by sophomore Molly Kaiser as she posted 11 points on a trio of field goals while going 5-of-6 from the charity stripe. Fama Thiam was also impactful off the bench for the second straight outing – finishing with seven points, three rebounds and a steal. As a unit, NM State held the Lopes to just 25 percent from the field – nearly 15 percent lower than their season average of 39.7 percent. The Aggie defense also forced the Lopes into 18 turnovers while turning the ball over 12 times themselves. The Aggies also force Grand Canyon to equal its lowest total of made field goals this season (13). The GCU offense was captained by Amara Graham as she finished with 16 points while Tiarra Brown was the game's third double-digit scorer by putting up 11 points to go along with 11 rebounds. Jay McChristine also secured 12 boards for the Lopes.

SECOND QUARTER· The Aggie scoring run continued to expand as they opened the second quarter with eight straight points, thus extending the number of unanswered points to 14 and giving the Aggies a 21-15 advantage.· During the streak, the Aggies claimed their first lead of the game after Grace Colaivalu set a screen to clear space for Fama Thiam and Taylor Donaldson found Thiam at the top of the key for a deep three-pointer to put the Aggies up 18-15 at the 8:53 mark.· The Lopes then responded with a 6-0 run of their own that evened the score at 21-21 with just under two minutes to play in the first half.· The Aggies would, however, score the final basket of the first half as Grays used a powerful left-handed dribble to enter the lane from the top of the key and finish a layup with the same hand to give NM State a 23-21 at the halfway point.· In total, the Aggies limited the Lopes to just six second-quarter points. THIRD QUARTER· The first Aggie points of the second half did not come until the 7:31 mark of the third quarter when Grays knocked down a jumper after scrambling for a loose ball among three Lopes.· The Aggies would only score seven points in the third period with the remaining five points coming from the hands of Adrianna Henderson and Molly Kaiser at the free-throw line.· After Kaiser's final free throw put the Aggies ahead 30-29, Grand Canyon scored six consecutive points to take a 35-30 lead into the final quarter. FOURTH QUARTER· After Soufia Inoussa opened the fourth quarter with a driving layup, Grand Canyon pushed its lead to six points on the heels of a Tiana Brown three-pointer with 7:54 left in regulation.· The Aggies and Lopes then traded successful possessions as Jade Bradley hit a pair of free throws and Brown then hit a two-point jumper.· The following two Aggie points came from freshman Sylena Peterson who played six of her eight minutes during the most crucial stretch of the game. She played a vital role in helping the Aggies battle back as she posted four points and registered one steal and one assist while playing the point guard role for Brooke Atkinson down the stretch.· Down five points with under five minutes remaining, Fama Thiam rolled in her second three-pointer of the game.· Peterson then drove to an open lane that was created by Shania Harper and put in a layup to tie the game at 43-43 with 3:23 to play.· Unfortunately, these would be the final points the Aggies would score on the afternoon as GCU finished the contest by scoring three unanswered points to earn the win. UP NEXT· The Aggies now get a full week's rest as they do not return to action until Saturday, Feb. 26, when they play host to Chicago State.· NM State will look to even the season series with the Cougars after dropping the first meeting back on Jan. 25. Tip-off for the upcoming matchup is set for noon in the Pan American Center.