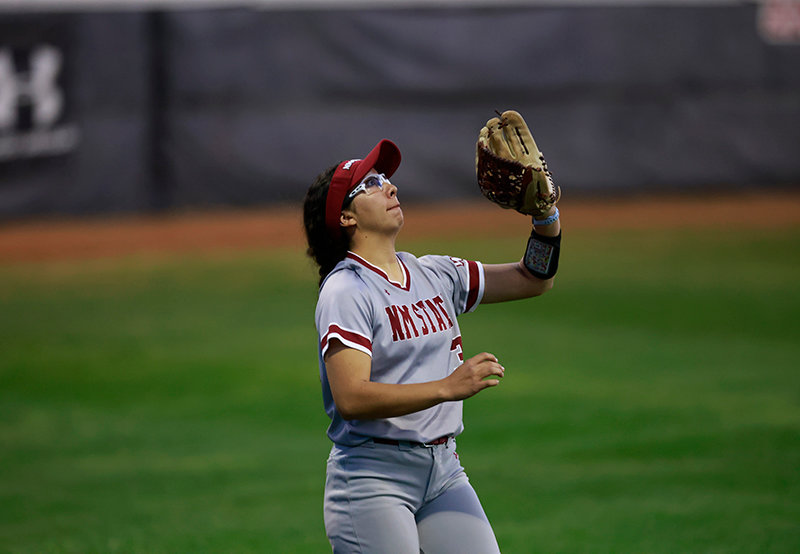 The Aggies are set to open up conference play with a home series versus Grand Canyon as the two collide in a trio of games across Friday and Saturday inside the NM State Softball Complex. First
NM State Athletics photo
Posted Thursday, March 17, 2022 4:41 pm
NM State Athletics Release

The Aggies are set to open up conference play with a home series versus Grand Canyon as the two collide in a trio of games across Friday and Saturday inside the NM State Softball Complex. First pitch on Friday, March 18, is set for 6 p.m. while Saturday's doubleheader is set to kick off at 4 p.m. Last week, the Aggies were in the Lopes' home state of Arizona as they took part in the Sun Devil Classic in Tempe, Ariz., on the campus of Arizona State University. Although the Aggies started the classic with an 11-7 win over Ball State, NM State dropped its next four to move to 5-15 on the season.

Where to Watch
The first of the three-game series in which the Aggies are playing host will be featured on ESPN+ and Bally Sports Arizona Extra while both Saturday matchups will be shown on WACSports.com/watch. Fans can also follow along by tracking live stats here.

Legend in the Dugout
Kathy Rodolph has had a remarkable career as the head coach of the Aggies. In her 19th year at the helm, Rodolph is the winningest coach in NM State history with a 549-456 record. She's led the team to four WAC Tournament Championships and six WAC Regular Season Championships, including last season when the team went 14-4 in conference play. She is also a five-time WAC Coach of the Year. She has helped the Aggies capture the last eight WAC player of the year awards and back-to-back WAC Freshman of the year awards. Additionally, Rodolph has helped 17 players earn NFCA All-Regional Team honors.

Aggie Rundown
The Aggies' record is somewhat reflective of the level of competition they have faced as their schedule has featured two teams ranked inside the top-25 and three squads that participated in the NCAA Softball Tournament one season ago. NM State opponents have also combined for an overall win percentage of .609 (185-119) this season. This includes five teams with win percentages of .720 or better. Meanwhile, Grand Canyon's opponents have won less than half of their games, combining for a .481 win percentage (220-237).

Prior to traveling to Tempe, the Aggies earned a two-game sweep of rival New Mexico in a doubleheader on Tuesday, March 15. Against the Lobos, NM State used big boosts from Savannah Bejarano and Kayla Bowen to collect a pair of wins. Bejarano finished the series 3-for-4 at the plate with a double and three RBIs while Bowen finished the day with four RBIs. In the circle, the Aggies were led by Jordin King who threw 4.2 innings while allowing just four hits and two earned runs.

Meanwhile, the Aggies' outings in the Sun Devil Classic were highlighted by performances from Jillian Taylor. In five games, Taylor slashed .563/.588/.875 to bring across three runs on nine hits in 16 at-bats. The sophomore also hit her second home run of the season and increased her double total to four on the season. Paige Knight was also impressive last weekend as she recorded six hits to finish the stretch with a .400 batting average. She also tallied five RBIs, a home run and a double in 15 at-bats.

Statistically Speaking
Yazzy Avila remains one of the WAC's top hitters as her batting average of .404 ranks second in the league. Kayla Bowen also ranks among the top-10 in batting average in the conference as she currently hoists a .370 average to rank 10th while Riley Carley (.368) and Maya Martinez (.367) rank 11th and 12th, respectively.

Bowen's seven doubles also tie her with California Baptist's Maile Olsen for fifth-most in the league thus far. The Aggies' Ramsay Lopez has been one of the top power hitters in the WAC as she is tied for first in slugging percentage (.870) and tied for second in total home runs with seven.

As a team, the Aggies' 21 home runs are good for second in the WAC while their 98 RBIs are tied for third-most in the league. Through 18 games, the Aggies are also slashing .320/.393/.511 to sit atop the league in all three categories. NM State's .314 batting average also ranks 31st among Division I programs.
Scouting the Lopes
Led by head coach Shanon Hays who is in his first season at the helm, the Lopes will enter the weekend series with a record of 17-7. After a 15-3 start in which they were carried by an offense that averaged 6.3 runs per game, Grand Canyon has dropped four of its last six and averaged less than two runs per outing during that stretch. Contrary to the Aggies who have been away from home for 14 of their first 20 games, this will be the first time that the Lopes step out of the home confines of GCU Softball Stadium - having played all 24 games with the second at-bat.

At the plate, Grand Canyon is led by Katelyn Dunckel whose .433 batting average and 29 hits pace the WAC in both categories. The Lope lineup also features the conference's leader in RBIs and home runs as Denae Chatman has brought in 29 runs and hit eight home runs on the year. Grand Canyon also brings the league's leader in ERA as Ariel Thompson allows just 1.60 earned runs per outing.

As a team, the Lopes rank first in the WAC in hits (192) and second in runs scored (124) while also sitting atop the conference in stolen bases (65).

History vs. GCU
The Aggies currently hold a commanding record of 17-9 in the all-time series versus the Lopes while also riding a three-game win streak in games against GCU, including knocking the Lopes out of the WAC Tournament last season. NM State also holds a record of 10-2 in the last 12 meetings.