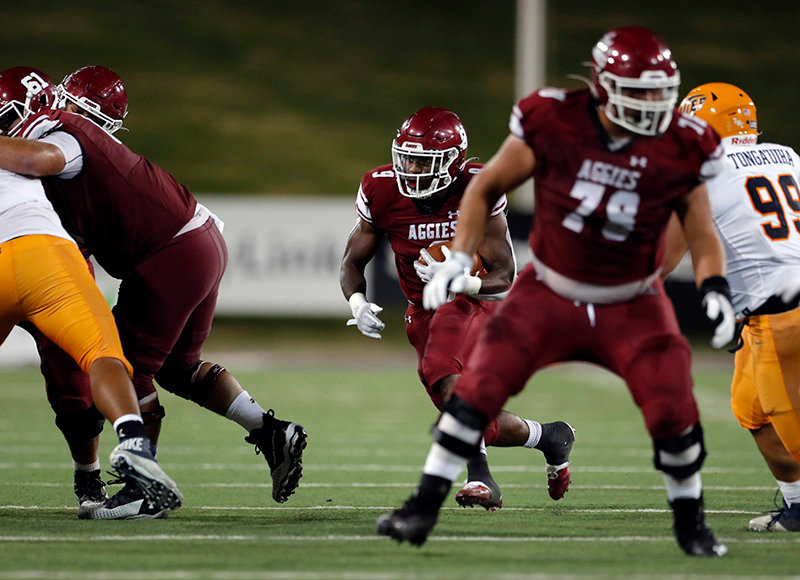 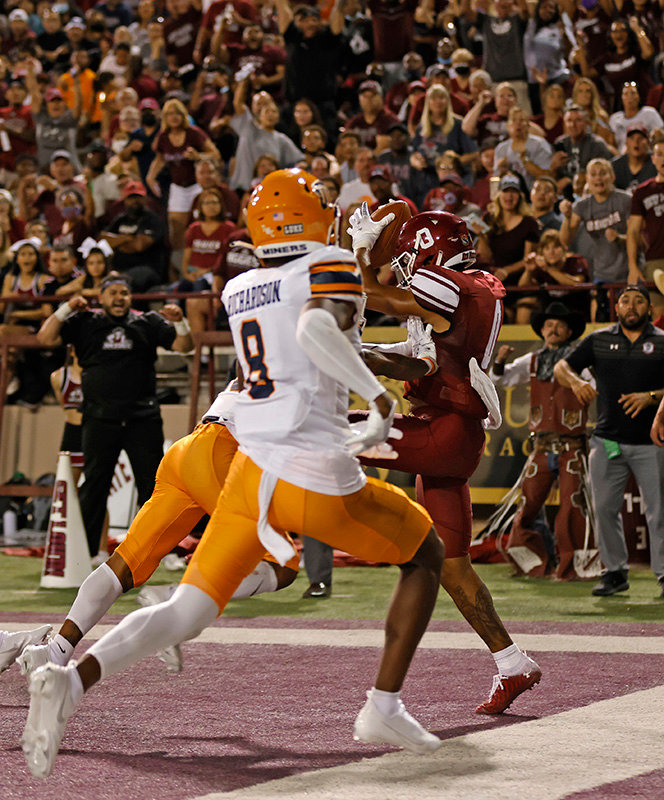 Junior Jonah Johnson earned the start at quarterback for the Aggies and completed 8-of-24 passes for 82 yards.

On the guard the Aggies were paced by Juwaun Price (9 carries, 37 yards) and O'Maury Samuels (9 carries, 28 yards). Samuels also added a pair of receptions for 20 yards.

The Aggies won the coin toss Saturday and used a 15-yard first down play from Johnson to Samuels to advance the ball to the 42-yard line, before the drive stalled.

On their opening drive of the contest, UTEP (1-0) authored a five-play 80-yard drive that ended in a five-yard rush by Deion Hankins. The big play of the drive was a 72-yard pass from Gavin Hardison to Jacob Cowing. Cowing ended the contest with five receptions for a game-high 158 yards and a score.

After a Johnson fumble, the Aggies lone turnover of the night, the Miners added 35-yard field from Gavin Baechle to take a 10-0 advantage with 9:09 remaining in the opening quarter.

On the ensuing NM State drive, the Aggies advanced the ball deep into Miners territory, before ultimately stalling at the 22-yard line. The Aggies sent out kicker Ethan Albertson who missed a 38-yard field goal. The miss was the first of the kickers NM State career, as Albertson was previously 5-for-5 on field goal attempts.

With the momentum after the missed kick, the Miners seized control of the contest, as Hardison led a six-play 80-yard drive that ended with a 34-yard rush by Ronald Awatt that gave the visitors a 17-0 lead with 118 seconds to play in the opening quarter.

On his next drive, Johnson looked to have led the Aggies on their first scoring drive of the season, when he advanced his to the Miners 15 at the end of the first quarter. On the opening play of second quarter, Johnson rolled to his left and threw a dart into the back corner of the endzone.

The pass fell into Gicinto's hands and it looked like the wide receiver dragged his toe for a 15-yard score but the play was deemed incomplete. After review the call stood, and the Aggies were forced to settle for a 27-yard field goal that cut the Miners lead to just 17-3 with 13:48 in the opening half.

Johnson and the offense received the ball back at the 33, just three plays later when Dalton Bowels picked off a deep pass from Hardison.

On the very next play, Johnson hit wide receiver Isaiah Garcia-Castaneda for what looked to be a 66-yard score, but offensive lineman Sage Doxtater was deemed an illegible man down field. The penalty wiped off the Aggie score, as the drive ultimately ended with another Josh Carlson punt.

After the teams traded three-and-outs on the next two drives, UTEP added to its lead right before the break, using a methodical 12-play 52-yard drive that ended in another Baechle field goal, this time from 27 yards out.

Following the break, the Miners needed just three plays, to march 75-yards for the third and final touchdown of the night. The big play was a 59-yard strike from Hardison to wide receiver Jacob Cowing with 13:48 to play in the third quarter.

The Aggies defense buckled down following the score as the unit allowed just 104 yards of offense and three points over the remaining five Miners drives.

INSIDE THE BOX SCORE:
• O'Maury Samuels, Dominic Gicinto, Chris Ojoh and Torren Union all made their first career Aggie starts.
• The nephew of Gabrielle Union and Dewayne Wade, Union had six tackles (five solo), and a pass break up in his debut.
• Ole Miss transfer Eli Johnson also made his Aggie debut at center.
• Josh Ferguson had a career-high two tackles for loss.
• Trevor Brohard tied his career-best tackle output, with 11. He was the Aggies leading tackler.
• DJ McCullough also added an interception for the Aggies. It was his first career interception.

COACH SPEAK (HC DOUG MARTIN):
"On the positive side, if there is one for losing this game, we at least played physical. It wasn't like the spring games. Guys played fast and hit hard, so we can correct the other mistakes. The penalties hurt us all night. We had a couple of touchdowns called back due to penalties and had a few dropped passes. And then we were in third and long because of the penalties. In the first half we had a few passes go over our heads which was the problem. In the second half our defense played pretty well, only giving up 10 points and the one touchdown. They rebounded and played a little better in the second half. We have a long way to go and have a lot to overcome. It's one game, and we'll reload and play next week.

UP NEXT:
The Aggies hit the road for the first of two straight on the road, when they travel to southern California to face San Diego State next Saturday (Sept. 4).