Aggies end memorable season on a couple of bittersweet notes 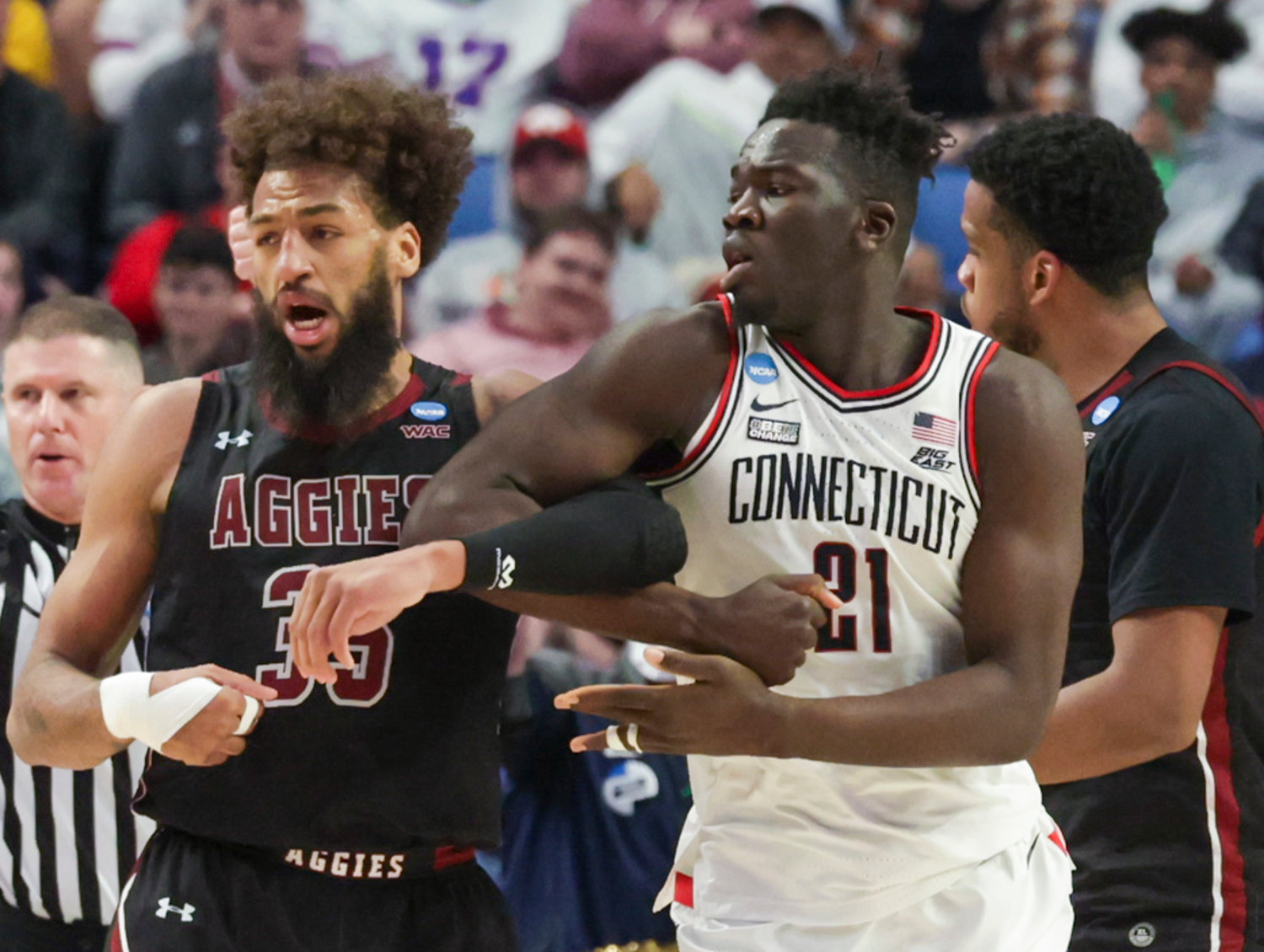 BUFFALO, NY - MARCH 17: during the second half of play in the NCAA Men's Basketball Tournament game between #5 UCONN and #12 New Mexico State at the KeyBank Center on March 17, 2022 in Buffalo, New York. (Photo by Nicholas T. LoVerde)..the first round of the NCAA Men's Basketball Tournament at
Nicholas T. LoVerde
Posted Monday, March 21, 2022 5:16 pm
By Dave Burge

It was a season everyone associated with the New Mexico State University men’s basketball team will long remember, but there was also a twinge of the most bittersweet emotion of all — of what might have been.
The Aggies, 27-7 overall, won their first NCAA tournament game in 29 years, upsetting the University of Connecticut 70-63 March 17 behind Teddy Allen’s 37 points and came tantalizingly close to advancing to the Sweet 16, losing 53-48 to Arkansas March 19 in the second round.
Adding to the bittersweet end to the season, head coach Chris Jans took the head coaching job at Southeastern Conference member Mississippi State not even 24 hours after the Aggies’ season ended.
That ended a stellar five-year run for Jans in Las Cruces, in which his teams won four Western Athletic Conference titles and went to the NCAA tournament three times.
Jans, during what turned out to be his final news conference as Aggies coach, got emotional when talking about this year’s team.
“None of us wanted it end,” Jans said, shortly after the loss to Arkansas. “It’s been special. We wanted to soak it up. I tried to get them to understand how rare these runs are and create some memories.
“We weren’t shy about talking about San Francisco (where they would have gone to if they had advanced to the Sweet 16) and beyond,” Jans added. “To be honest with you, I thought this team had a chance to make one of those special runs. Unfortunately, it didn’t happen.”
It still accomplished plenty. Besides the victory over UConn, the Aggies also won a share of the WAC regular-season title and won the conference tournament.
“We won a game in March Madness,” Jans said. “That is probably what I will remember the most. I’m happy we gave that to our fan base; they have been starving for that. I’m sure they are disappointed tonight, like we all are. As the days get away and we gain some perspective, I think we will look back fondly on what we accomplished this year but (this loss to Arkansas) will sting for quite some time.”
The Aggies committed 12 turnovers in the first half against Arkansas and managed to score just 17 first-half points, but found themselves down by just nine at the break.
NM State battled back to briefly take the lead in the second half but Arkansas went on a run to put the game away.
In the first game, it was Teddy Allen with the heroics. His 37 points were the most scored ever in an NCAA tournament game at KeyBank Center in Buffalo, N.Y. Jameer Nelson of St. Joseph’s had held the record with 33 points in a game with Liberty in 2004.
Against Arkansas, it was Oñate High product Johnny McCants who stood out in the national spotlight. McCants, a sixth-year senior playing his final game for NM State, finished with a 16-point, 12-rebound double-double to go along with two blocked shots, two assists, two steals and a thundering dunk that fired up his team and Aggie fans in the second half.
Allen finished with 12 points against Arkansas.
Jans said McCants cemented his legacy as an “Aggie legend for life.”
McCants said he played his heart out and didn’t want the season to end.
After the UConn game, McCants, Allen and Jabari Rice all said they were thrilled to be able to win a game in the NCAA tournament for Aggie fans across the state of New Mexico and the country.
“I love our fans,” McCants said after the UConn game. “They are basically the heart and soul of our team. They bring energy and pick us up.”
Aggie fans could say the same thing about McCants and this bunch — about the energy and joy they brought all season long, even if the ending wasn’t quite what everyone wanted.