NM State's Battle of I-25 win streak snapped by Lobos 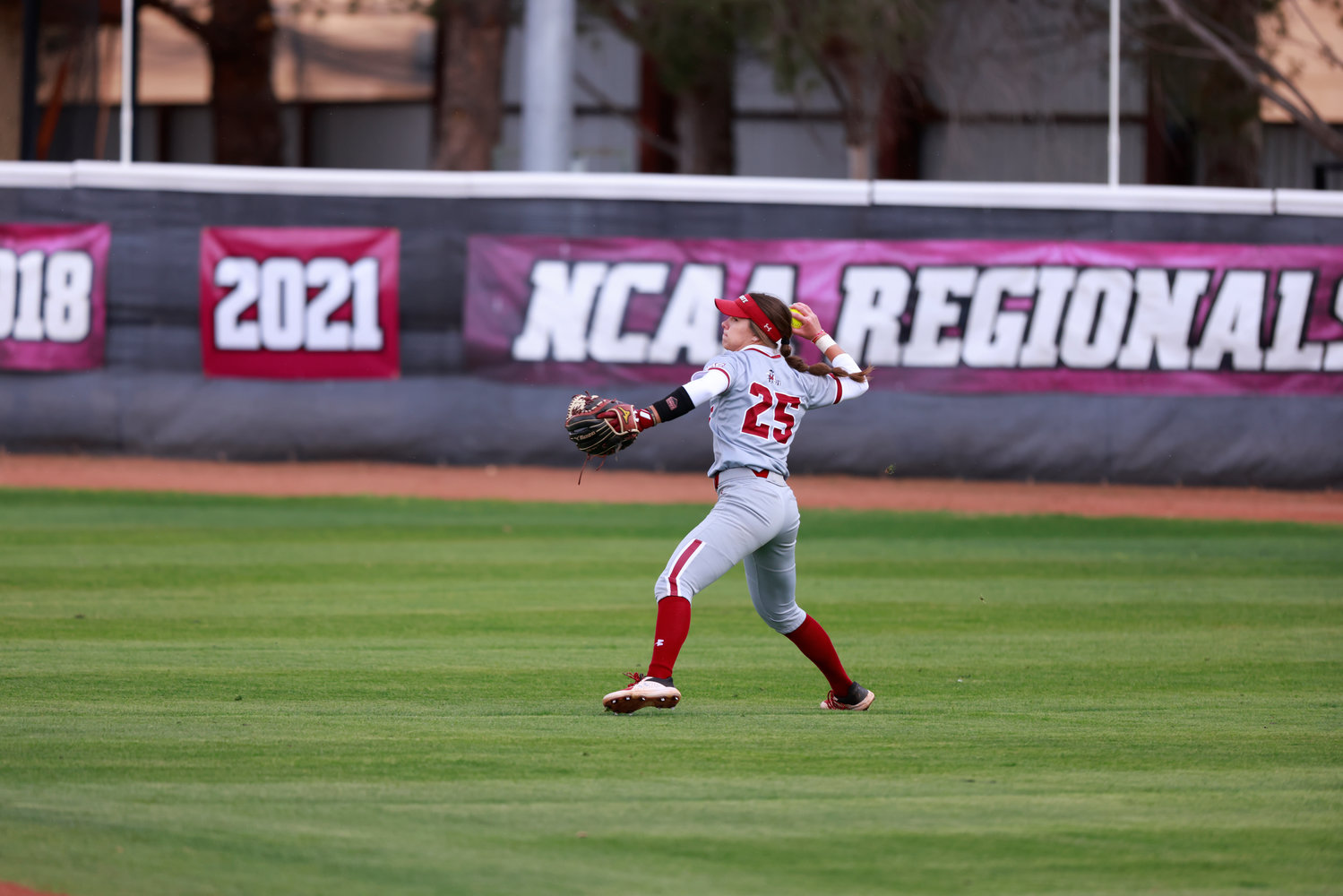 LAS CRUCES, N.M. – After the two sides went back-and-forth for five innings, I-25 rival New Mexico poured on eight runs in the sixth and seventh to defeat the Aggies, 13-4, at the NM State Softball Complex. Prior to the loss, the Aggies had earned the nod over UNM in seven-straight outings.

Jordin King earned the start for Kathy Rodolph's squad – throwing 4.0 innings, allowing six hits and striking out a pair of Lobo batters. Meanwhile, Emma Guindon started in the circle for the opposition as she threw three innings and was the lone New Mexico pitcher to allow a run. Amber Linton entered in the fourth for the Lobos and threw four scoreless innings while giving up just one hit.

At the plate, Maya Martinez turned in one of the better days of her season as the second baseman went 2-for-3 on the evening, including an RBI double in the bottom of the third inning. Madison Muxen, the Aggies' designated player for the game, matched Martinez's output at the plate with an RBI on a pair of hits. The remaining two NM State runs were driven in by senior Kayla Bowen who plastered a ball over the left-field wall to record her third home run on the season.

The Lobo offense was powered by Leslie Romero who was a perfect 3-for-3 at the plate and finished a triple away from hitting for the cycle against the Aggies. The junior was responsible for six of the 13 runs scored by New Mexico.

Following a leadoff triple from Peyton Robinson, the Lobos' Ashley Archuleta hit a ground ball to Jayleen Burton at shortstop, who held Robinson temporarily before throwing to first and allowing Robinson to come home for UNM's first run of the game.

In the bottom half of the first inning, Ramsay Lopez earned a leadoff walk before Martinez recorded her first hit of the day to put runners on first and second for the Aggies. An error made by the second baseman that would have been the final out of the inning then allowed Paige Knight to get aboard to load the bases. Muxen was then able to drive in Lopez from third as she punched a ball through the left side of the infield to equal the Lobos' run total from their first at-bat.

After a scoreless second inning in which King tallied her 32nd strikeout of the season, the Lobos were able to load the bases in the top of the third with Romero entering the batter's box. Romero proceeded to drive in all three Lobo baserunners as she hit a ball that rolled to the wall and put UNM ahead 4-1.

Similar to the first inning, NM State had the answer it needed in the home side of the inning. Jillian Taylor extended her hit streak to 11 games when she singled up the middle to lead the charge. Taylor then sped home from first base as Martinez dropped a ball into the right-center gap for her fourth double and 21st RBI of the season. Kayla Bowen then evened the score at four runs apiece in the very next at-bat as she hit a two-run home run that sailed over the left-field wall.

The Aggies picked up their only one-two-three inning of the ballgame in the fourth inning as King got Briana Martinez to fly out and Kayla Bowen got the next two batters out with unassisted plays at first base – including diving to tag the bag for the third out of the inning.

Inning four was also when Indiana transfer Amber Linton entered the circle for New Mexico as she was able to put away three Aggie batters without the ball leaving the infield in the bottom part of the inning.

A double from the Lobos' top hitter in Andrea Howard and a pair of walks would load the bases in the top of the fifth for the visitors donning anthracite and turquoise. Taryn Young then hit a sacrifice fly out to center field to help Howard score. However, a ball thrown on a rope by the Aggies' Jillian Taylor allowed Ramsay Lopez to tag out Emma Bramson at third – recording an impressive double play for NM State. This would also help limit the damage to just one Lobo run after having three runners on and no outs gone.

Linton picked up where she left off in the fourth inning as she struck out two Aggies on her way to her second perfect inning.

The Lobos quickly threatened once again in the sixth inning as two of their first three batters reached base. In what appeared to be a simple ground out to first, both runners were then moved before lead runner, Robinson, caught the Aggies sleeping and stole home to put the Lobos ahead 6-4. Although, the Aggies' mistake might have been proven irrelevant as Romero homered in the next at-bat to clear the bases and give the Lobos a 9-4 advantage.

Once again, the Aggie hitters could not solve the Linton puzzle in the sixth as she threw nine pitches in her third flawless inning since entering the game.

With a five-run cushion, the Lobos chose to go to their reserves as the first four batters in the seventh inning were all pinch hitters. Two of those reached base via walks while the fourth Lobo, Savannah Braun, recorded just her second hit of the season as she hit a three-run home run to push the UNM lead to eight runs. New Mexico would add one more insurance run to put the Aggies in the trail position by nine runs entering their final at-bat.

An Aggie finally figured out Linton as Gabby Aragon led off the bottom half of the inning with a single up the middle before later advancing to second on a wild pitch. With two outs away, Maya Martinez also reached base as she was walked on five pitches to give the Aggies a glimmer of hope. However, Linton struck out the final Aggie batter to help New Mexico claim its first win over NM State since 2018.

UP NEXT
The Aggies now return to conference play as they hit the road to take on California Baptist in a three-game series stretched across Friday and Saturday of this upcoming weekend. NM State will see the Lancers twice on Friday, March 25, with the opening game getting underway at 5 p.m. MT. The series will then wrap up on Saturday with the first pitch scheduled for 6 p.m. MT.