Phoenix, Ariz., product produces second-highest point total by an Aggie inside the Pan Am Center 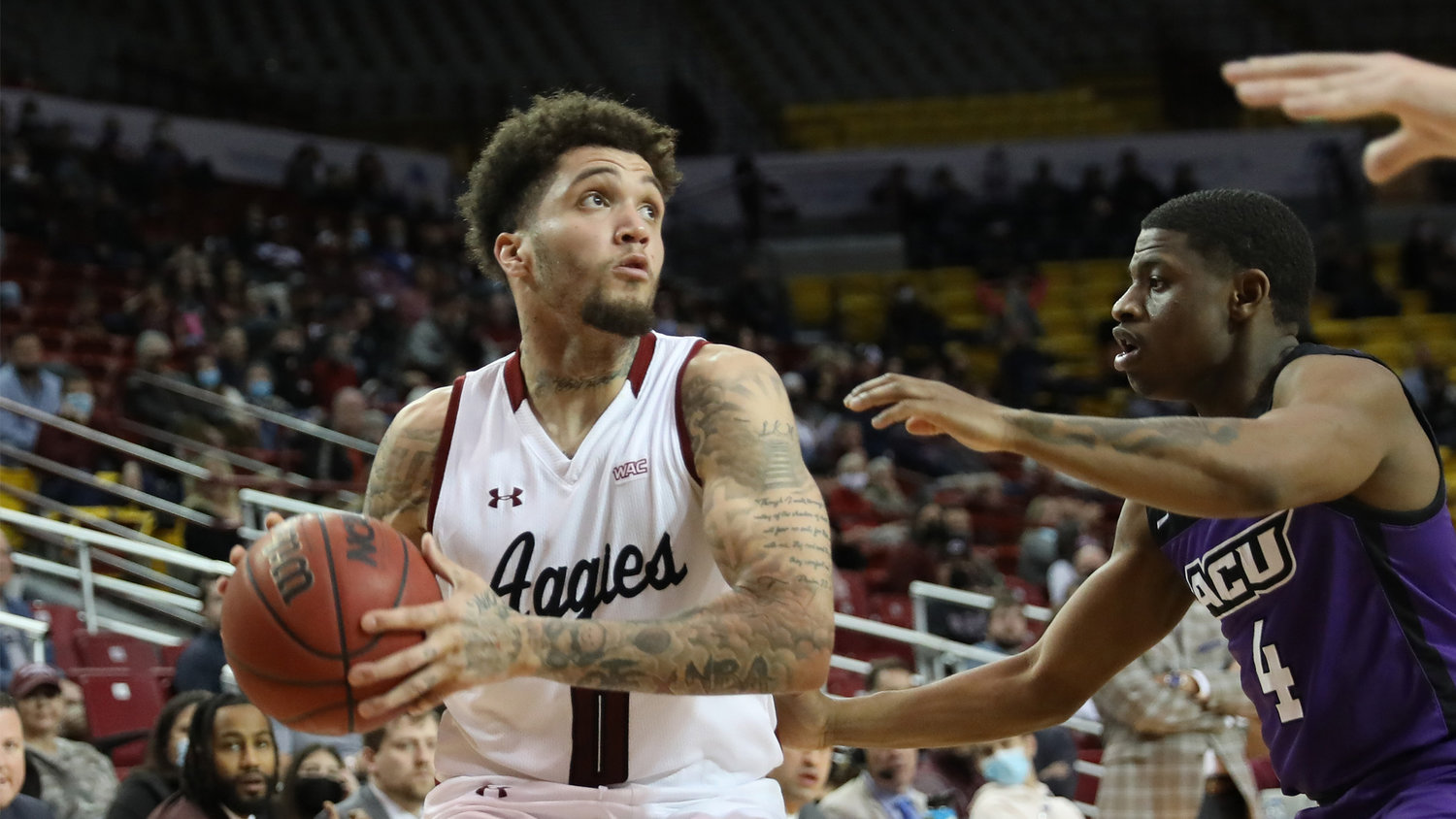 • A road trip to east Texas is in order for the Aggies as they hope to build on their 10-game winning streak. NM State's first stop next week is Huntsville, Texas, for a Thursday evening tilt with WAC newcomer Sam Houston. Tip-off inside Bernard G. Johnson Coliseum is set for 5:30 p.m. MT in the first meeting between the Aggies and Bearkats since 2005.

If people in and around the Las Cruces area did not know why Teddy Allen went by the nickname "Teddy Buckets," they probably do now.

Few one-man scoring performances in the Pan American Center were as memorable as the one Allen put on inside the Aggies' home Saturday night as the Phoenix, Ariz., product matched his career high by pumping in 41 points on a 13-of-20 showing from the field to lead NM State to a 77-63 win over Abilene Christian.

The first meeting between the Aggies and Wildcats since 1966 evolved into Allen's own personal offensive clinic. NM State's high-scoring guard netted the most points by an Aggie in a game since Eric Channing went for 41 against North Texas nearly 20 years ago to the day (January 26, 2002).

FIRST HALF
• From the opening tip, it became clear Allen would be an aggressor on offense all night. He registered seven of NM State's 10 points during the team's 10-2 run to begin the game, dropping in the first of his six three-pointers in the hosts' opening salvo as well.
• Though it looked the Aggies were primed for a runaway, Abilene Christian had other ideas. Coryon Mason and Mahki Morris joined forces to lead the visitors on a 10-0 run over a span of 2:45
which put the Wildcats on top by a 12-10 margin.
• Trailing with 13:06 to go in the half, NM State scored all of the points through the next 3:24 to retake the lead for good. Jabari Rice broke a 12-12 deadlock by splashing a corner three-pointer with 9:42 left, but the Wildcats never, ever quit.
• Mason twirled in two free throws with 8:51 on the clock, pulling the Wildcats back within one by the time both found their way through the bottom of the net. Rice, though, cashed in on a second three-pointer on the very next NM State possession to push the hosts' cushion back to four.
• The final 13 points NM State came up with in the first 20 minutes of action were scored by just three players. Allen, Rice and Marchelus Avery were responsible for all of NM State's offense through the final 8:36 of the half.
• One final time, when the clock read 3:19, the Wildcats threatened to grab the lead. Morris canned an easy layup which trimmed the Aggies' lead to 25-24, before the free throw line proved to be a friend to the hosts.
• Rice rimmed home three free throws in the final 2:54 to account for all the scoring through that span. Those three freebies hiked NM State's lead to 28-24 at the break.
• NM State remained ahead at the break thanks almost exclusively to the tandem of Allen and Rice. That pair combined for 21 of the Aggies' 28 first-half points with Allen going for 12 and Rice adding nine more.

SECOND HALF
• Allen and Johnny McCants had apparently been making plans to put the game out of reach once the final frame started. That pair accounted for all of NM State's points as the Aggies went on a 9-1 run to open up a 37-25 lead with 18:47 left.
• Following Clayton Henry's three-pointer with 17:42 on the clock, the Aggies' lead grew to 13, 40-27, before the Wildcats used their aggressiveness to their advantage.
• Mason registered five points and two other Wildcats added markers through a 12-2 run by the visitors. Following that surge, NM State's lead stood at just three, 42-39, with 14:34 to go.
• Fortunately, Allen picked that time to continue his hot shooting night. Eight of NM State's points on its 12-4 run were pumped in by Allen and two more three-pointers by the baddest man in Las Cruces pushed NM State's lead back to double-digits, 54-43, at the 9:42 mark.
• After a fast-break three-pointer by Allen, a technical foul was assessed to him and the Wildcats took advantage. ACU scored nine of the next 10 points, whittling the Aggies' lead down to 55-52 with 6:50 left.
• Allen had the last laugh, though, as he continued to hurt the Wildcats. Of the 11 points NM State scored on its ensuing 11-4 run, all but three were put in by Allen. Following his fast-break layup with 4:05 left, NM State's lead had been pushed back to double figures, 66-56.
• The Aggies closed things out with a few more field goal makes and with some strong foul shooting down the stretch. Allen made his way to the 40-point mark by drilling the first of two free throws off of an ACU technical foul with 25 seconds left and matched his career high of 41 by nailing the second.

KEY PERFORMERS/STATISTICS OF NOTE
• With Allen administering one of the finest offensive showcases the Pan American Center had ever seen, that didn't leave too many more points to spread around. Rice and Henry put in 10
points apiece, going a collective 5-of-9 from the field. The duo also put forth a strong 5-of-7 showing from three-point range and the Aggies connected on a season-best 47.8-percent of their long range shots.
• Mason manufactured a 19-point outing for the shorthanded Wildcats who were without five players in Saturday night's tilt. Morris added 11 more and Abilene Christian used a 24-of-27 night at the foul line to keep things close.
• The Wildcats' free throw shooting helped them stay afloat when the shots weren't falling, which was quite often thanks to NM State's defense. The Aggies allowed Abilene Christian to shoot just 17-of-50 (34-percent) on the night which included a 5-of-24 (20.8-percent) showing from three-point range.
• NM State committed 13 turnovers - the same number as the Wildcats.
• NM State's 10-consecutive wins represent the nation's third-longest active winning streak. Only Davidson and Auburn have gone longer without losing as they own 13-game winning streaks as of this writing.
• Allen's 41-point performance was the second-highest point total by an Aggie inside the Pan American Center. Only Willie Humes of Idaho State bettered it by scoring 43 in a neutral-side game played inside the facility on Dec. 27, 1969.
• The only other NM State players to better Allen's 41-point outing inside the Pan American Center were the late, great Jimmy Collins who went for 42 in the Aggies' home win over Air Force on Feb. 14, 1970. Additionally, Ernest Patterson amassed 42 for NM State against New Mexico in the Pan Am on Dec. 11, 1982.