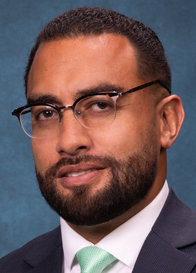 He was attracted to Las Cruces because of community members’ “core values, respect for each other, family and religion,” he said.

“It’s not rocket science when you have an all-star cast,” he said. “We have a great staff with great skill sets.”

Taumoepeau and his wife have a son and three daughters, ages 1-8.

Las Cruces has a “family environment,” he said, and has turned out to be “everything we thought this city would be. It’s all true.”

Going forward, Taumoepeau said the goal for city leadership is “to take Las Cruces to a place it’s never been before.”

“We have the team to get there,” he said, and Pili “has the vision of where he wants to go.”

Transparency, “being accountable to the public” and having an open-door policy are also important elements of good government, Taumoepeau said.

“The best ideas come because you’re talking to stakeholders in the community,” he said. Working with local stakeholders and regional partners is “organic collaboration,” he said.

A native of San Francisco, Taumoepeau has a bachelor’s degree in history with a minor in Spanish. He has a master’s degree in public administration. Both degrees are from Brigham Young University.