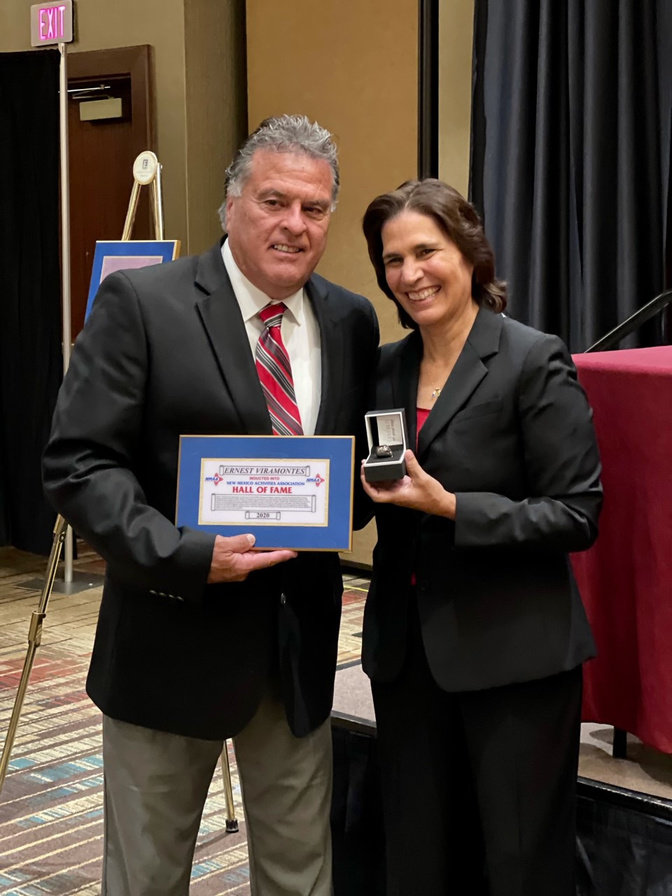 Las Cruces Public Schools Athletics Director Ernie Viramontes has been inducted into the New Mexico Activities Association Hall of Fame, but he had to wait a little longer than expected to get the honor.

His selection was initially announced in 2019 and he was scheduled to be honored in March 2020 during the state basketball tournament.

But the celebration was put on hold for more than a year because of the Covid-19 pandemic.

Instead, Viramontes was honored during the annual fall conference of athletic directors in September 2021 in Albuquerque.

Viramontes has worked in a variety of roles with Las Cruces Public Schools since 1984. He has worked as a teacher, counselor, assistant principal and athletic director.

Viramontes also has coached track, football and basketball at the middle-school and high-school levels for LCPS.

Following high school, Viramontes attended New Mexico State University where he earned a bachelor’s degree in physical education with a minor in math and a master’s degree in bilingual education.

Starting in 2004, he moved to the district office where he first served as assistant athletics director for two years before becoming the district athletic director in 2006, a position he still holds today.

“I am truly blessed working for this district that has given me so much,” Viramontes said in a press release issued by the district. “This is a team effort and I couldn’t get the job done without the people I work with, my staff. I would like to thank my family for always supporting me and inspiring me every day. Finally, I would like to thank the athletes and the people here in Doña Ana County. Thank you for giving me the opportunity to serve my community.”

Viramontes has also served the NMAA in several capacities, including the NMAA Commission and Board of Directors, sports specific committees, the NMAA Hardship Committee, the NMAA Eligibility Committee and the NMAA Classification and Alignment Committee.

The NMAA Hall of Fame includes individuals who have made significant contributions to interscholastic education in the state of New Mexico over an extended period of time. The hall of fame was established in 1976 and consists of 108 members. In order to be considered, nominees must show “great support of the NMAA’s philosophy and objectives, they must have a combination of involvement in formulating regulations and procedures for various interscholastic education programs and they must have a minimum of 25 years of service, 20 of which must have been in New Mexico,” according to the LCPS press release.