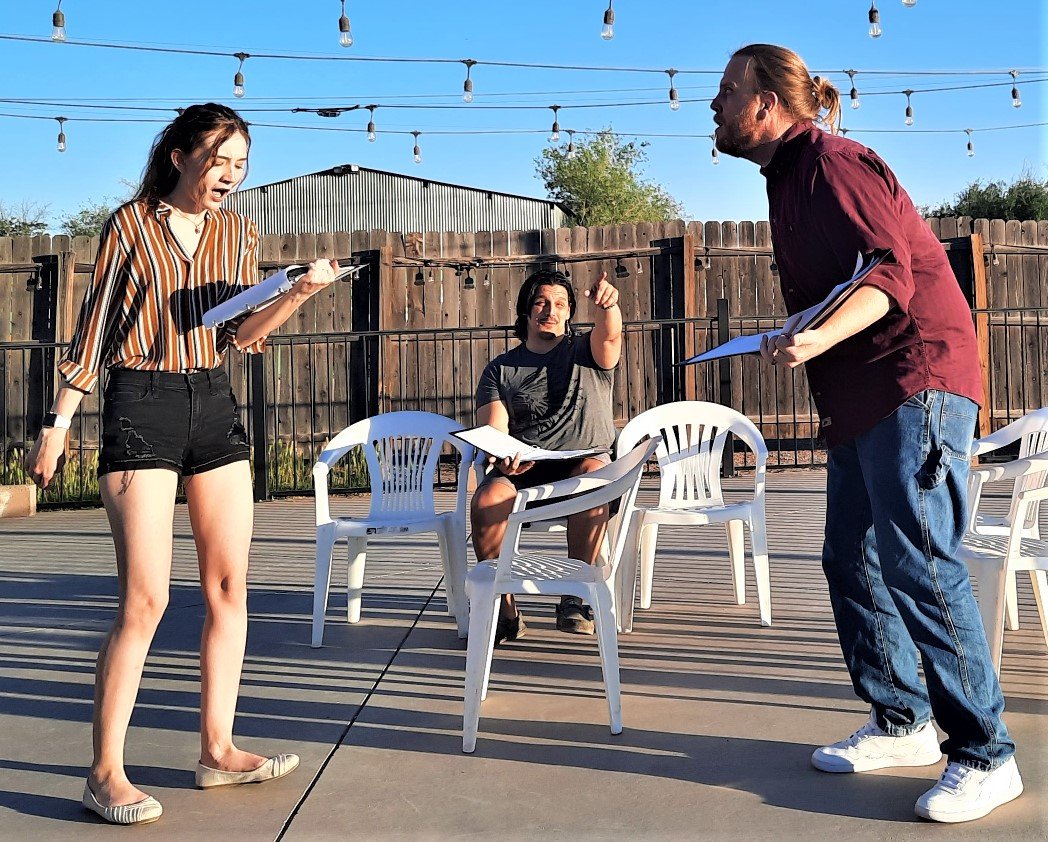 Blank Conversations Theatre Company (BCTC) returns to the Rio Grande Theatre (RGT) in May with the presentation of Steve Martin’s “Meteor Shower,” co-directed by Isaac Goldstein and Yasmine Jahangiri.

Regular admission is $15. Student tickets are $10. Buy tickets online at www.riograndetheatre.org (click on “Upcoming Events” and scroll down to the “Meteor Shower”) and at the door before the show.

“Meteor Shower” is set in the 1990s, as a married couple, Norm and Corky, have invited their neighbors, Laura and Gerald, over to their house to watch a meteor shower, BCTC President and co-founder Gus David Sanchez said. However, as the night begins to unravel, Norm and Corky find their neighbors may not be all that they appear to be.

“This production features some of Las Cruces’ hardest working talents,” Sanchez said, including Eric Brekke as Norm, Jazmin Buchman as Corky, Chad Gonzales as Gerald and Reagan Szulc as Laura.

Gonzales and Szulc were in BCTC’s recent production of “Singin’ in the Rain” at RGT. The production is Brekke’s first since he portrayed the monster in “Young Frankenstein: The Musical'' in 2019.

“We have had a lot of fun rehearsing for this wonderfully absurd show,” Brekke said. “We are constantly laughing. I can't think of a better way to return to live theater than doing this show, with this tremendously talented cast and crew, and fulfilling one of my dreams of acting on the Rio Grande stage.”

“Meteor Shower” also marks the directorial debuts of NMSU students Isaac Goldstein (who most recently worked as an assistant director for NMSU Theatre’s “Mojada: A Madea in Los Angeles”) and Yasmine Jahangiri (recently seen in NMSU Theatre’s “Deal Me Out” play reading).

“I'm very excited to make my directing debut alongside my good friend, Isaac,” Jahangiri said. “Moving from being an actor to a director has been an exciting learning experience. And I'd like to thank Blank Conversations for giving us this opportunity.”

“We have absolutely loved working on (this) absurdist comedy, and we can’t wait for you to come and see what we’ve done,” Goldstein said.

“Meteor Shower” was written by comedy icon Steve Martin. It opened on Broadway in 2017. Cast member Amy Schumer was nominated for a 2018 Tony award for her performance.