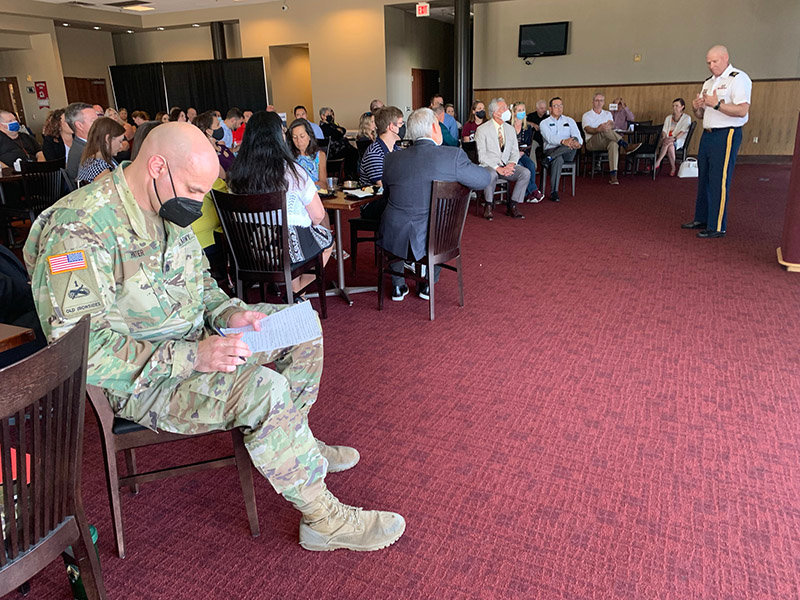 Community support for Operation Allies Refuge Afghans at both Holloman Air Force Base and Fort Bliss can be provided by contacting:

HAFB – Building 17 (near the MDG, on First Street) from 9 a.m. to 4 p.m. Monday through Friday. Requests consideration of the following, new items preferred. No open or expired packages and containers. Baby cribs, pack and play pens, toddler beds and mattresses, pillows and bedding/sheets are welcomed. Lightly used clothing must be cleaned before donating. Items to be sorted and screened during delivery (donating member and volunteer must be present). Info: donationsforasi@gmail.com.

Community members gathered Friday Aug. 27 for a Chamber of Commerce-organized event to update Doña Ana County residents about military operations in the area.

Howell said there is a lot of change happening at WSMR currently.

“There is a Special Forces element that has become permanently stationed at White Sands which is going to bring in hundreds of thousands of rotational forces,” he said. “You are already probably seeing some of that influx. More and more people are coming to get trained at WSMR including … some forces from Kirtland (Air Force Base) that are going to be permanently stationed here.”

“Project Convergence is a campaign of learning to aggressively pursue an artificial intelligence and machine learning-enabled battlefield management system,” according to the Army Futures Command website.

It means the Army will be able to get equipment to the soldier in the field faster, Prosser said.

“Because in the past it may take from the time I joined the Army to the time I retire from the army, 30 years, for a piece of equipment to make its way through the entire process,” he said. “We really are trying to shorten that up. It’s faster, it’s cheaper and it’s our technological advantage.”

He said while America was working on counterinsurgency, China and Russia were doing things like developing technology and it is time for the United States to catch up.

Prosser also spoke about concerns as an aging civilian workforce is retiring from WSMR.

“We are looking at STEM (science, technology, engineering and mathematics) employees,” he said. “Right now, 26 percent of our entire workforce are retiring. What we are looking for in the future is to partner with the education system in the community.”

Prosser turned the mic back to Howell to announce that the Bataan Memorial Death March will be live again for 2022 and there are many opportunities for community members to help and participate.

Lt. Col. David M. Hunter, garrison executive officer at Fort Bliss, spoke about Operation Allies Refuge, which is taking in recent Afghan refugees and housing them on the New Mexico portion of the installation.

“The numbers that Doña Ana range area operation … vary day by day,” he said. “We are providing services, housing – when our guests come over from Afghanistan, we provide a safe and secure place where they can actually be vetted as well as look out for what is next for them moving forward into the future.”

He emphasized that Ft. Bliss also continues to provide support for migrant children from Mexico setting a safe and secured area to stay until they have a registered sponsor. The two efforts are not related, nor are they at the same location, he said.

Hunter said Fort Bliss consists of more than 35,000 soldiers, airmen and other service members; 13,000 civilian contractors; and 38,000 family members all of which equals about $25.6 billion dollars of impact to the regional economy.

While Holloman Air Force Base was not represented at the event, a news release states the base is also assisting the Department of State in housing vulnerable Afghans in support of Operation Allies Refuge.

“We are following through on America’s commitment to vulnerable Afghans and Afghan nationals who have helped us,” Lt. Gen. Brad Webb, commander of Air Education and Training Command, said. “We are honored to provide the essential support where they and their families can complete processing safely.”

The task force at HAFB will provide housing, medical, logistics, and transportation support.