Citizens celebrates 50th, plus one 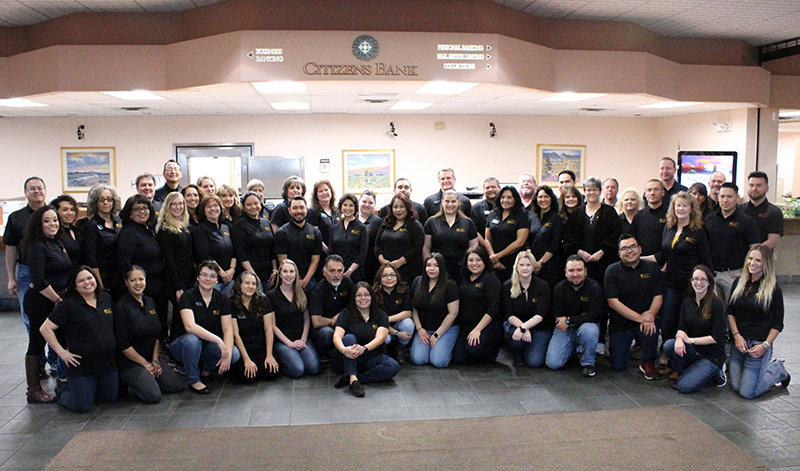 The founders, board members and staff members of Citizens Bank have always prided themselves on forward thinking.

So perhaps it’s fitting the book they created commemorating the bank’s golden anniversary is titled “The First 50 Years.” It leaves little doubt they are planning to be around another half-century.

Citizens Bank opened in April 1970, 51 years ago. The bank had 50th anniversary plans slated for 2020, but just as so many other activities, they were postponed by the pandemic.

Over those first 50 years, the bank grew from its one original location, in the historic Amador Hotel, to its current number of eight locations. The bank has grown from $4.4 million in assets the first year, in 1970, to more than $613 million in assets in 2019.

When the bank launched operations in the Amador Hotel it soon adopted the “El Cortijo” as its symbol representing a marketplace. This symbol depicts the sun radiating to neighboring communities surrounding the central area of trade. The Bank’s founders chose the symbol because they viewed the responsibility of the bank as being the heart of the community, providing needed financial services to communities it served.

Another key part of the bank’s growth has been its technological advances through the years.

Remember in 1999, when everyone was worried about computers crashing at the end of the millennium? Or maybe you haven’t thought about it since Jan. 2, 2000, when it became clear the world wasn’t coming to an end.

Part of that becoming a non-event was the diligence of large institutions making proper preparations.

Citizens Bank was right there, too, and began testing data processing in 1998. The bank promoted its readiness with posters and advertisements pronouncing “We’re A-OK for Y2K!”

Here is a chronological progression of some of the highlights of the bank’s technology advances.

And while Citizens Bank has long seen technology as an important tool, the bank was founded on the principles of taking care of people.

The initial marketing slogan for the bank was “Modern Banking in the Old Friendly Tradition.”

Tom Hutchinson, the bank’s board chair since 2008, said the bank doesn’t add technology for technology’s sake, but adds it when it can enhance the bank’s efficiency and improve the customers’ experience.

“Because we don’t live in a big city, we’re able to watch the banking industry reinvent itself, without having to be a national leader in it,” Hutchinson said. “We recognize technology is changing daily, but we’ve been smart and strategic in changing it where it makes most sense for our community and our customers.”

“Even with technology and tools and social media and all the things people use to communicate, banking is still very much a people business, and that’s what Citizens Bank has done a good job of preserving -- the people part,” Fanning said.  “Technology has brought an additive to help us provide even more customized and personalized service to what we call relationship banking, but it’s not at all a replacement.”

The pandemic year presented another challenge for Citizens Bank to help its customers with something new and unfamiliar, yet invaluable for many businesses.

“The Paycheck Protection Program is a good example where we had to utilize technology in the form of a portal with the Small Business Administration (SBA), the most important part was simple but necessary communication with our customers,” Fanning said.

An application bottleneck with the SBA resulted in many applications nationwide getting kicked out of the system. So Citizens figured out an alternative way of processing that involved expanding the work day.

“Executive Vice President Tim Hargrove, spread our workload over more hours,” Fanning said. Staff staggered their schedules so the work was getting done from as early as 4 a.m. to as late as 8 p.m. This enabled Citizens to better conquer the PPP learning curve.

“It also enabled us to support our customers and many other businesses who weren’t getting the service they needed,” Fanning said. “I’m particularly proud of our team; it was brand new for our team members as well as our customers, but what didn’t change was the value of our personal interactions.”

Hutchinson and Fanning represent another thing on which Citizens Bank prides itself: continuity.

In the 51 years of Citizens Bank, Hutchinson is just the fifth board chair, and Fanning is just the seventh president/CEO.

“I’m so proud we have stayed locally owned,” Hutchinson said.  “Especially in a time when banks are constantly changing names. I love the way the bank has adjusted and evolved over time, and continued to meet needs of community. We just don’t make a lot of guesses. We have a lot of smart, hard-working people who are also very loyal, as evidenced by number of people who have been with the bank for a long time. When you walk in the doors of Citizens Bank, you’ll find it’s very customer oriented, service oriented, and the people have a can-do attitude. We find a way to make it work.”

“And it’s not just the end result that we get for our customers,” Fanning said. “In my mind it’s so much around how we get there. That ‘how’ has everything to do with relationship banking, and how we personalize things for the customer. It’s what makes us enjoy getting up in the morning and coming to work.”