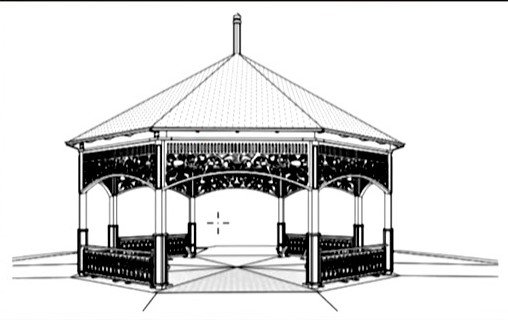 The Las Cruces City Council has approved plans to renovate one of the city’s oldest public structures.

The Pioneer Women’s Park gazebo, 500 W. Las Cruces Ave., has been the site of weddings, candlelight vigils, Christmas-tree lightings and many other public events for well more than a century.

Built in May 1898, the gazebo underwent a major renovation in the 1970s and has had incremental replacement and repair work done over the years, including lighting and irrigation improvements, with new play equipment added about 10 years ago, city landscape architect Cathy Matthews told the city council at its June 21 regular meeting.

At that meeting, the council voted unanimously to approve plans for the first phase of gazebo renovation, including design and construction. Matthews said phase 1A will cost about $400,000. She said the city has received $200,000 for the project from the New Mexico Legislature and will seek additional funding from the Legislature and other sources to cover the remainder of the cost.

Matthews said the renovation will “retain the original footprint and character of the gazebo.”

“This is really important not only to the area there but across the city. The entire city really reaps the benefit of this park,” said Mayor Pro Tempore Kasandra Gandara, who represents Council District 1, which includes the 2.7-acre park.

The park master plan, which the city council approved in 2019, calls for the renovation project to include the gazebo itself, including its roof and floor, along with the addition of a brick patio around the gazebo, additional trails, more play equipment and the restoration of arbors on the east and west sides of the gazebo. The arbors were last in place in the 1930s, Matthews said.

Plans for gazebo renovations included input from people who live near the park “and interested folks throughout the community,” Matthews said. The city held public input meetings in November 2021 and in February and April of this year, she said.