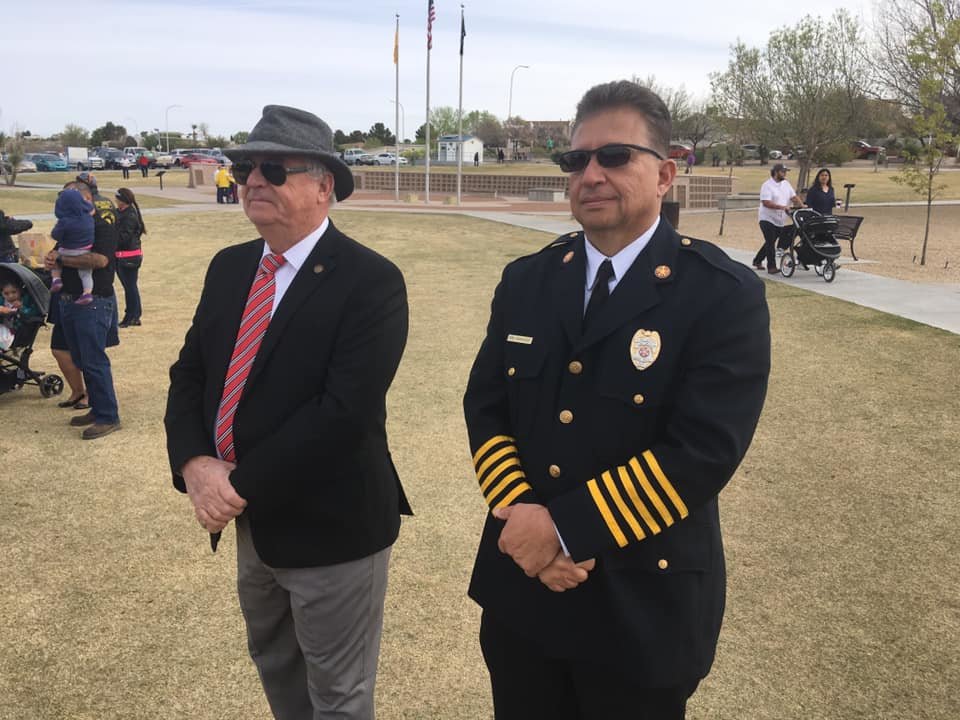 City of Las Cruces Community Development Department Director Larry Nichols, left, and Assistant City Manager Eric Enriquez, who was then the fire chief, at a 2019 event at Veterans Memorial Park.
Photo is from City of Las Cruces Facebook 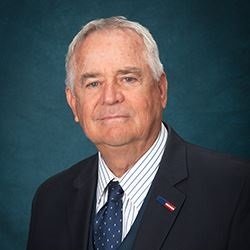 That is the personal mantra of City of Las Cruces Community Development Department (CDD) Director Larry Nichols, who has devoted his adult life to building, as a volunteer, a contractor and a government official in three states and two countries.

While in the Peace Corps, Nichols built schools in Afghanistan and tried to teach Afghan boys and girls how to play basketball. Other highlights: He was a decorated combat veteran during the Vietnam War and he met President George W. Bush in the Oval Office.

Today, as Las Cruces experiences record growth in construction, Nichols oversees a department with more than 50 employees who are responsible for city subdivisions, zoning and signs; building permits and licensing; and city and county transportation planning.

“It’s all about land use,” said Nichols, who became CDD director five years ago.

Nichols was born in Missouri and moved to Las Cruces with his parents at age 7.

Nichols attended Alameda Elementary School and Alameda Junior High and graduated from Las Cruces High School, where he played on two state championship teams, one in basketball (coached by Lou Henson) and one in track. He also played baseball and football for the Bulldawgs.

His grandfather owned a motel in town and his father owned a Texaco service station and an A&W drive-in, where the younger Nichols made root beer floats.

Beginning at age 12, Larry swept the driveways at the Texaco station, checked tires, washed windows and cleaned the restrooms. He still remembers the pride he felt when an inspector listed the station as having “registered clean restrooms.”

“It was my proudest moment,” Nichols said.

After earning a degree in architecture from Arizona State University, Nichols joined the Peace Corps, serving as a school architect in Afghanistan, helping build eight to 10 schools. Teaching Afghan children to play basketball was a particular challenge, he said, as they developed their own version of the game that was more like rugby, tackling the opponent, taking the ball and trying to score.

“They had a good time,” Nichols remembers.

After returning to the United States, Nichols joined the U.S. Army, where he became a field artillery officer and a battalion intelligence officer and taught leadership. Nichols served six months “in the bush” near the Cambodian border in Vietnam, rising to the rank of first lieutenant and becoming a decorated combat veteran.

After four and a half years in the Army, Nichols returned to Las Cruces and started his own business as a building contractor.

“I had a pickup and a toolbox,” he said.

He then became a building inspector for the State of New Mexico, working in the southern part of the state. That was followed by several years as planner for Luna County, with an office in Deming, and then running the building department for the City of Yuma, Arizona.

After five years in Yuma, Nichols moved to El Paso, where he worked in the building and planning department before becoming director of the city General Services Department, which oversaw 256 buildings covering 4 million square feet.

In El Paso, Nichols worked with Stuart Ed, who would become Las Cruces city manager in October 2016. Ed invited Nichols to apply for the position of CDD director in Las Cruces. Nichols was chosen for the job from among eight candidates, telling Ed and other city leaders, “I think I can make a difference.”

There’s a photo in Nichols’ office at Las Cruces City Hall of him and his wife, Denise, and their son, Grant, during a 2008 meeting with then-President George W. Bush at the White House.

“This is my office; this is where I work,” Nichols remembers Bush telling them. The meeting took place because Grant worked in the president’s office.

There’s also a photo in Nichols’ office of Clayton Moore and Jay Silverheels, stars of the 1949-57 “The Lone Ranger” television series, that Nichols uses to illustrate how he runs his department.

And despite two trips around the world and living in four other states, “I’ve always considered Las Cruces my home,” he said.

It is an honor and a pleasure to work with Larry Nichols, said Assistant City Manager Eric Enriquez. “He has changed the culture of Community Development to be focused on customers’ needs and requests through a friendly and efficient way. We are very fortunate to have Larry as our Community Development director.”

City construction on a record-setting pace

The Community Development Department had a record-setting year in 2021, Nichols said in a City of Las Cruces news release. There was $321.7 million in permit valuations in 2021, according to department reports, as 907 new homes were built in Las Cruces, 9,641 permits were issued, more than 18,800 inspections were performed, 137 planning development projects were submitted and 644 solar system permits were issued.

The city continues to see some construction industry downturns because of the pandemic, the news release said. “Labor shortages, unavailability of equipment and appliances and certain building material shortages were experienced in Las Cruces, and those continue to have a limiting impact in some instances on residential construction activities,” the city said.

And, if you think Las Cruces is a retirement community, consider this: Only 16 percent of new 2021 new-home buyers were retired. Most are younger, and a sizeable majority have moved to Las Cruces from other places, Nichols said.

That growth “is going to continue,” Nichols said. “I’m just glad to be part of it.”

Construction in Las Cruces didn’t shut down or slow down during the pandemic, he said, but the city began interactive video inspections (IVI), allowing the city’s eight inspectors to keep up with the growing volume of work by conducting about 30 IVIs per day, compared to the previous 12-15 on-site inspections.

CDD has good rapport with the construction industry, Nichols said, because he and his staff “find ways to be less governmental and more entrepreneurial.”