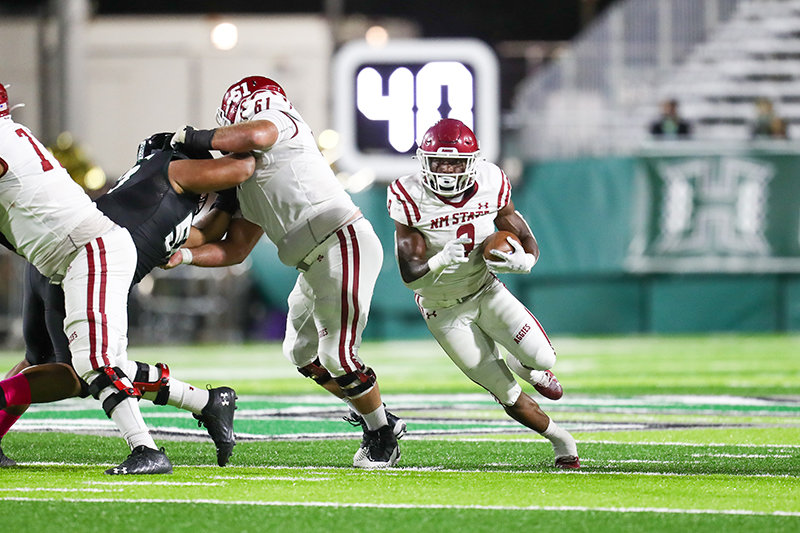 The Aggies have been in most of their games and seem to be only a play or two away from having a few more wins.

Saturday, Nov. 6, was a familiar story as NMSU led visiting Utah State 10-0 after the first quarter and 13-7 at halftime before ultimately losing 35-13.

That dropped the Aggies to 1-8 with road games against Alabama and Kentucky and their home finale on Nov. 27 against the University of Massachusetts remaining.

“We are right there,” said starting quarterback Jonah Johnson during an interview after practice the Thursday before the Utah State game.

“Sometimes, one play makes a difference in the game, and pretty much all our games, it hasn’t gone our way,” Johnson continued

“We are a good team,” the junior quarterback from Madera, California, said. “We just have to learn how to finish and play four quarters as a team.”

Despite the disappointing season, NMSU continues to practice and play hard and maintain a positive attitude. After watching them at practice, they seem like they don’t want to give up on the season or on each other.

Redshirt senior offensive lineman Sage Doxtater says they are excited about playing Alabama, consistently one of the best teams in college football during the past 15 years or so. Kickoff is scheduled for 10 a.m. Mountain time on Nov. 13 and the game can be seen on the SEC Network.

“I’m excited for the opportunity,” said Doxtater, also the Thursday before the Utah State game.

Doxtater, from London, Ontario, Canada, says they want to finish a disappointing season on a strong note by putting out the best effort they can.

“Obviously, it hasn’t gone the way we wanted,” Doxtater said. “A bowl game was our expectation. Clearly, that hasn’t happened. On a positive note, we are getting better every game. We don’t look like a one-win team.”

Sophomore defensive back Syrus Dumas also said after that Thursday practice that no matter who they have on the schedule, they will continue to play hard and try to finish the season on a positive note.

“We just have to finish games,” said Dumas, who is from Columbus, Mississippi. “We are working so hard. I love these guys. I love this team. I love the coaching staff. We are just going to keep pushing. San Jose State, we were close. The (second) Hawaii game, we were close. Most games, we were three or four plays away from winning. That’s all right. We will keep working.”

Dumas said he is also excited to play Alabama.

He said he knows some players on the Alabama team, has some friends who go to school there and will have family there at Bryant-Denny Stadium to watch him play.

Redshirt freshman running back Juwaun Price agrees that the team wants to finish the season strong and “put an L on someone’s record.”

“We know we can’t get what we want (going to a bowl), but we want to break down someone else’s season,” said Price, who is from Peoria, Arizona.

Price and others who are coming back next year hope that a solid finish can carry over to next year.