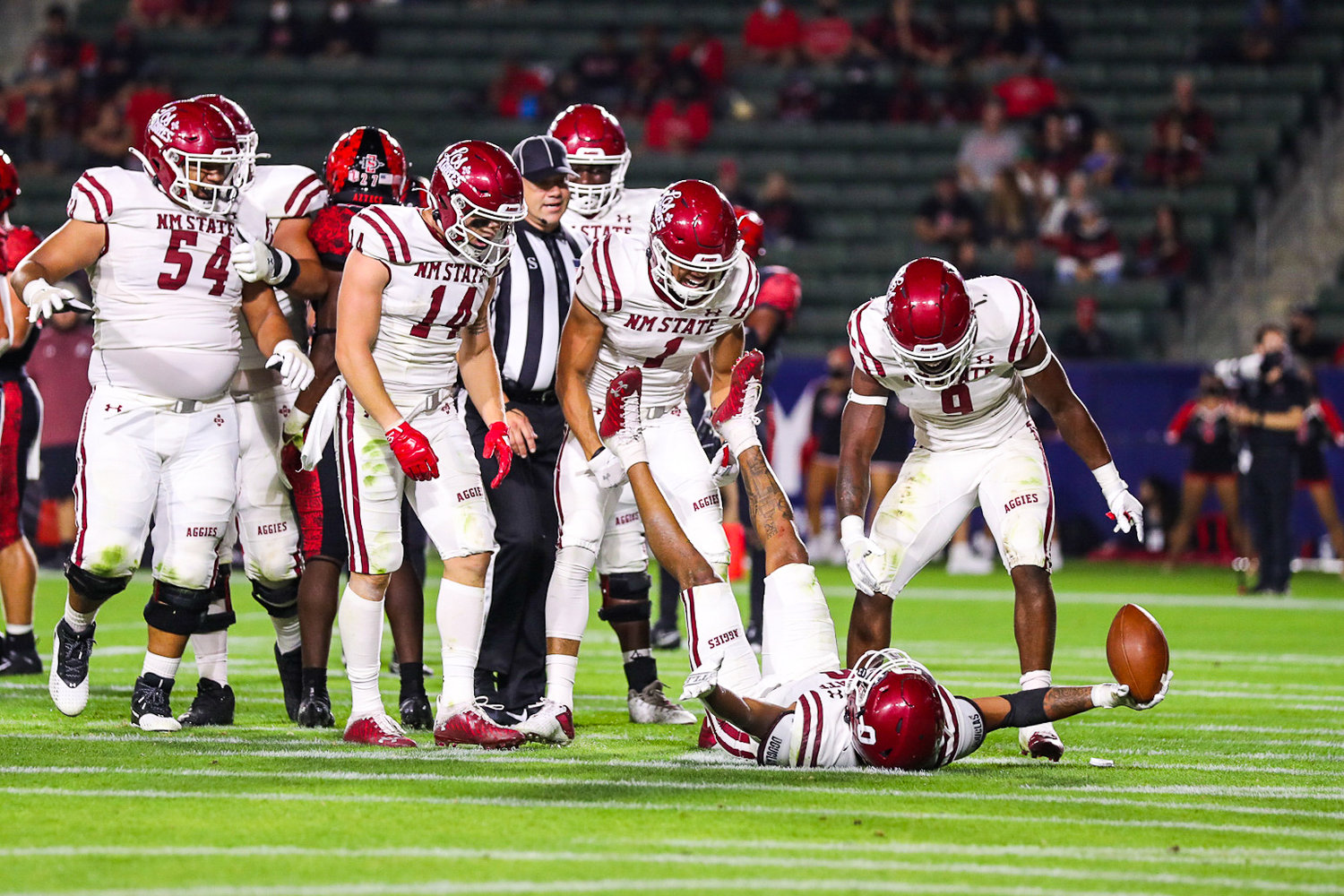 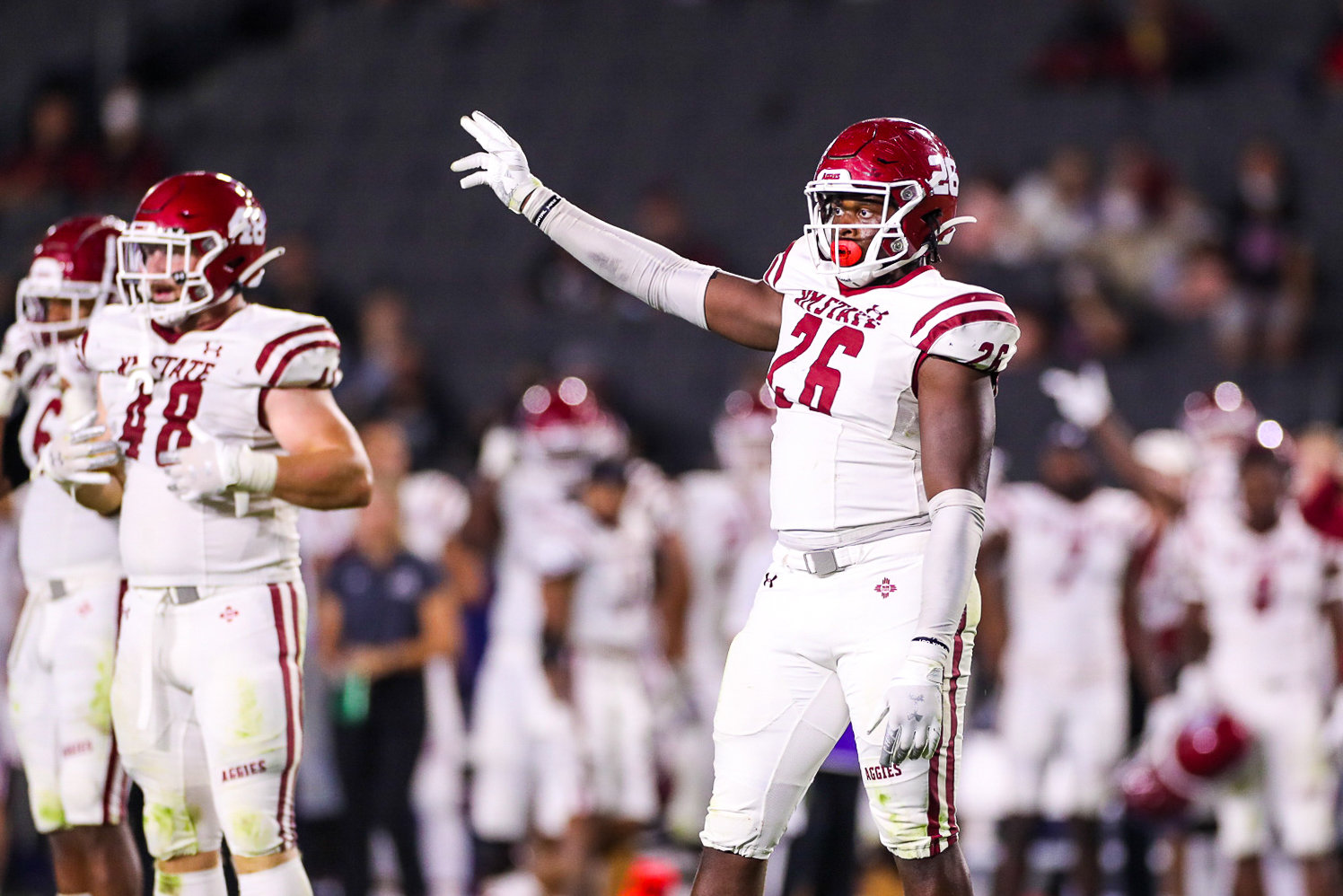 Despite a strong first half performance that featured the defense pitching a shutout, the NM State Aggies fell 28-10 to San Diego State, Saturday night at Dignity Health Sports Park.

NM State quarterback Jonah Johnson completed 34-of-56 passes for 326 yards and a score.

Johnson connected with nine different Aggies including Dominic Gicinto (7 catches, 64 yards) and Terrell Warner (9 catches, 65 yards), but was intercepted three times. Gicinto played in just the first half of Saturday's contest after suffering a season-ending arm injury in the second period of play.

Gicinto caught the Aggies lone touchdown of the contest, an eight-yard second quarter strike that gave the Aggies a 10-0 advantage.

After the two sides traded punts on their opening drives of the contest, Johnson and the NM State offense went to work, as the signal caller used a 25-yard first down pitch and catch to Dominic Gicinto to spark a 10-play, 75-yard drive that culminated with a 31-yard field goal from Ethan Albertson.

Due in large part to key contributions from Gicinto and Cole Harrity (5 rec, 38 yards) the Aggies moved the sticks five times on the drive.

The kick by Albertson, his second successful field goal attempt of the season, gave NM State a 3-0 lead with 7:25 to play in the opening period.

Following another sequence where the Aggies and Aztecs (1-0) traded punts, San Diego State marched the ball deep into NM State territory for the first time, using a 20-yard rush by running back Greg Bell to advance the ball to the NM State 15 at the expiration of the first period.

Bell finished the contest with 20 carries for 165 yards and a score.

On the first play of the second quarter, Bell took a carry up the middle, and was stripped by Donovan King. The ball was ultimately recovered by Torren Union as the Aggies took over at their own 10.

The turnover proved to be key, as it sparked yet another strong Aggie drive, as Johnson led his team on a 12-play, 90-yard drive that culminated with the strike to Gicinto that gave the visitors a 10-0 lead with 10:42 to play in the opening half.

As they did the entire first half, the Aggie defense bowed their necks, as the unit consolidated the score, by holding SDSU just two-net yards on the final four possessions of the half. The unit posted the first defensive shutout in a half since 2016, when the Aggies shutout Texas State in the first half of a 51-10 victory.

On the opening kickoff of the second period, the Aggies kicked the ball out of bounds, allowing SDSU to open the drive at their own 35-yardline.

The miscue sparked a three-play 65-yard SDSU drive that culminated in a 23-yard rush from Bell. The score cut the Aggies lead to just 10-7 with 13:43 to play in the third quarter.

Looking to answer the score, Johnson threw a pass that was intended for Robert Downs III but was intercepted.

As they did for most of the night during sudden-change situations, the Aggies defense responded, as Caleb Mills picked off the very next pass from Jordan Brookshire at the NM State seven. Brookshire was limited to just 7-of-20 passing for 115 yards on the night, as the Aggies sacked him twice.

With possession of the football again, Johnson found Harrity for a first down on the ensuing drive, before the possession stalled at the 27.

On the Josh Carlson punt attempt, SDSU return man Jordan Byrd was bumped by his own teammate and muffed the punt. Linebacker Michael Bowe recovered the loose ball giving the Aggies the possession of the football once again.

With the chance to regain momentum, the NM State offense stalled, giving possession of the football right back to San Diego State.

Sparked by a key second down tackle from Chris Ojoh, the Aggie defense forced yet another Matt Araiza. The Aggies forced nine Araiza punts.

NM State recorded a first down on the next drive, advancing the ball to their own 44, before Johnson was intercepted again by Tayler Hawkins on a deep pass intended for Warner.

Thrusted into yet another sudden-change situation, the Aggie defense forced the Aztecs into a third down and seven from the 44. On the ensuing play, Brookshire threw an errant pass that fell incomplete, but corner DJ McCullough was whistled for a personal foul that extended the drive.

San Diego State took advantage of the penalty, using a Bell 11-yard rush and an 18-yard touchdown rush by Brookshire to take a 14-10 lead with 3:01 left in the third quarter.

The score would be the final by either team, as San Diego State held on for a 28-10 victory.

COACH SPEAK (HC DOUG MARTIN):
"In the first half, we played very physical on both sides of the ball, and we protected Jonah extremely well. In the second half, we did not protect him at all. We're lucky we didn't get him injured tonight. We need to play a lot better up front if we're going to do anything on offense. Tonight, was another 'tale of two halves' so to speak. As a team, we need to find a way to be more consistent and play a complete game. We've found a way to play a strong half so far, but we need to learn to play a full game. We'll start on preparing for UNM right away, but like tonight, it's going to come down to whether we play a complete 60 minutes or just 30."

UP NEXT:
The Aggies make the short trip up I-25 for the Battle of I-25 against UNM. Kickoff is scheduled for 5:00 p.m. from Albuquerque. Fans watch the contest on Stadium or listen on the Aggie Sports Network.