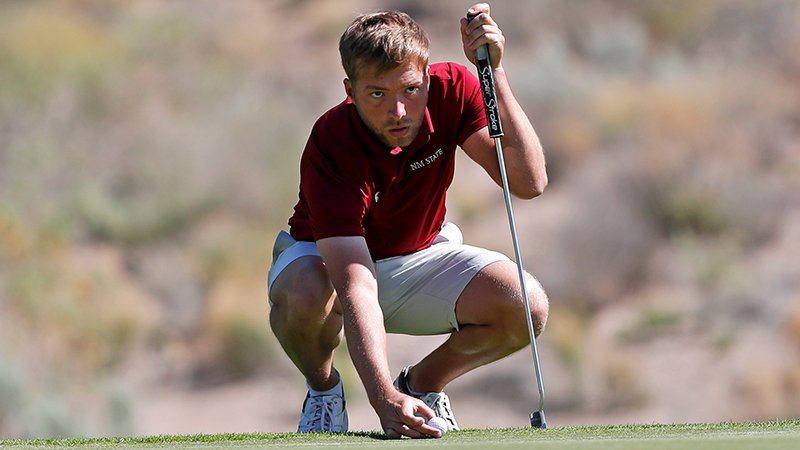 MGOLFThomasDAY3REGIONAL -- Freshman Aidan Thomas had a strong tournament in his hometown of Albuquerque, playing in front of his friends and family in the NCAA Southwest Regional.
Photos courtesy of NMSU 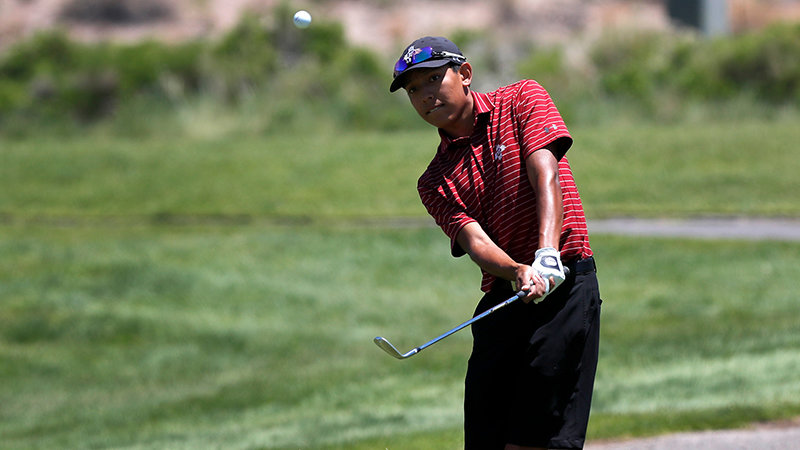 Garrison Smith, a sophomore, was the model of consistency with a 3-under par score over three days.
Photos courtesy of NMSU
Previous Next
Posted Thursday, May 27, 2021 4:15 pm
By Dave Burge

To quote a one-hit wonder band from the 1980s, their future is so bright they have to wear shades.

At the beginning of the season, they were as green as, well, a putting green.

The team, with just one upper classman, jelled at the right time and won its first WAC championship since 2015, beating Grand Canyon University by a single stroke at the conference championships.

That gave the young Aggies a berth in the NCAA regionals in Albuquerque, just up the interstate.

There, the Aggies turned in another powerful performance.

Sophomore Garrison Smith turned in the best individual performance by an Aggie golfer at an NCAA regional since 2013.

Smith, from Mansfield, Texas, finished tied for 18th with a 3-under three-day total of 213.

The last time an Aggie had finished in the top 20 at an NCAA regional tournament was eight years ago when Justin Shin shot a 3-under 207 in Tempe, Ariz., to take 11th place and Brett Walker shot a 2-under 208 for a 17th-place showing.

Smith was the model of consistency in Albuquerque, carding rounds of 71, 70 and 72. That’s the type of performance weekend-warrior golfers salivate over.

As a team, the Aggies took 12th place in their first trip to an NCAA regional since 2015. Overall, they shot a 19-over 883. Of course, this young bunch saved their best for last with a 2-over 290 on the third and final day in Albuquerque.

Freshman Joseph Robson, of Newcastle, England, followed an  opening round of 77 with consecutive 72s to finish with a 5-over total of 221, good for 47th place.

Aidan Thomas, the WAC Freshman of the Year, shot rounds of 76, 76 and 70 for a 6-over 222 in Albuquerque, good for a tie for 51st. Thomas put in his stellar third-round effort in front of friends and family in his hometown.

Grossl and Morales are – you guessed it – freshmen.

It all adds up to a rosy future for Aggie golf under the guidance of head coach Mike Dirks, who was named WAC  Coach of the Year for the fourth time this year.