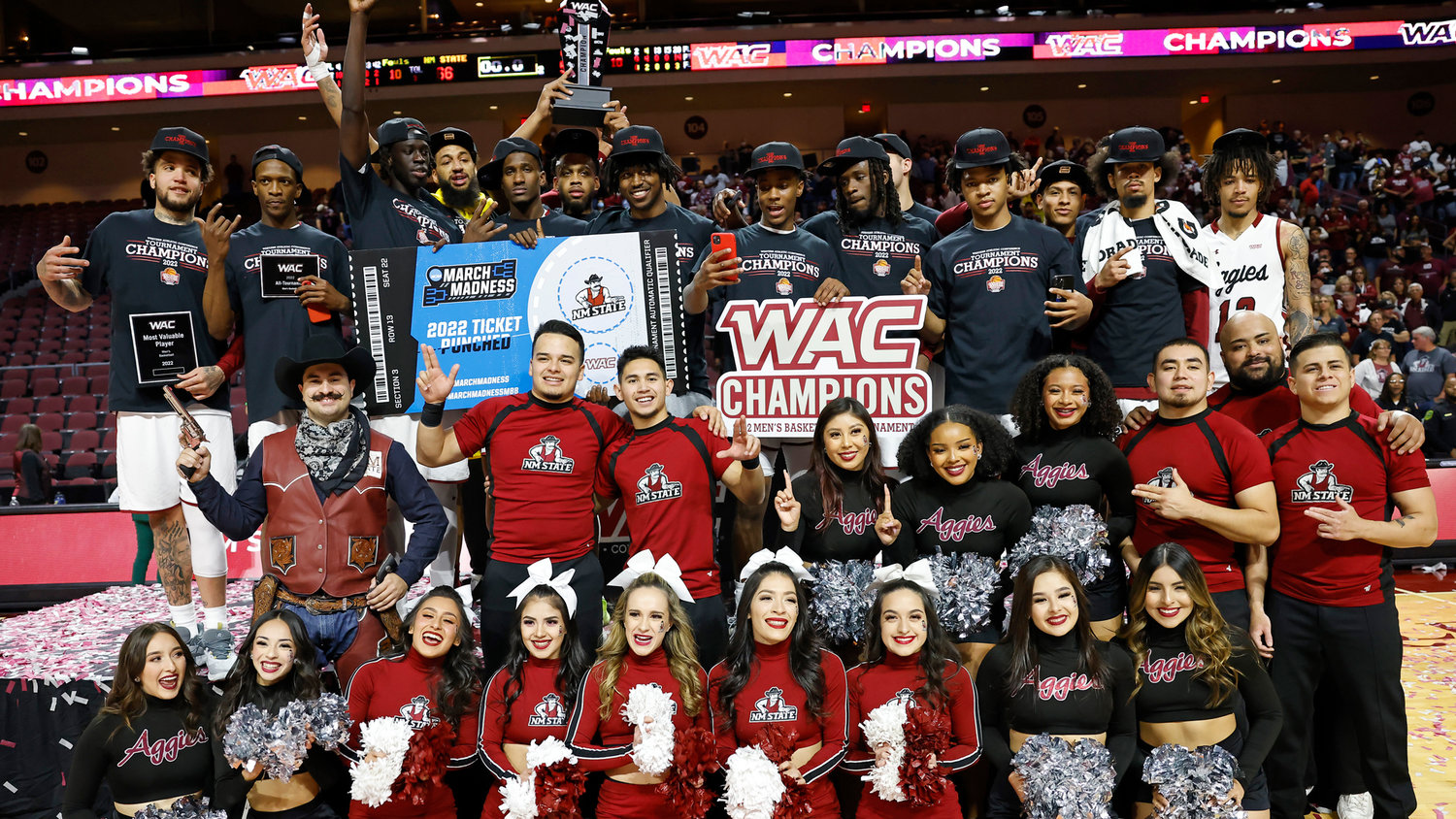 LAS VEGAS - Wracked by sobs, Donnie Tillman was inconsolable as he made his way back to NM State's locker room at The Orleans Arena on Saturday, March 13, 2021.

He wasn't the only one. A somber scene filled with red eyes, tears greeted him and everyone else in the Aggies' corner that night minutes after the score went final in their 74-56 defeat at the hands of top-seeded Grand Canyon in the WAC Tournament championship game.

Somehow finding its way through the sobs and silence after a pause which seemed eternal was one softly-spoken phrase: "As long as I'm here, I'm never gonna let this happen again."

Meant for the whole team, Chris Jans' words provided a powerful message to an NM State group that had been used to doing just one thing in the WAC Tournament - winning - while also telling the team there would indeed be better days ahead.

One year later, "The Man" proved to be a man of his word.

With 40 minutes separating them from the goal of every single NCAA Division I men's basketball team this time of year, the top-seeded NM State received a game-high 15 points from Clayton Henry and, coupled with some balanced offensive play and a devastating brand of defense, secured a 66-52 win over sixth-seeded Abilene Christian in the WAC Tournament title bout Saturday night at the Orleans Arena.

Not just a run-of-the-mill win, the victory ensured NM State claimed the WAC's automatic bid to the 2022 NCAA Tournament - something NM State fans have been used to since the Big Dance became a thing and since Chris Jans stepped foot in Las Cruces.

FIRST HALF
• As they had been doing for the better part of the week, it was the Wildcats who came out swinging. Abilene Christian grabbed hold of an early 8-3 lead thanks in part to an NM State squad which bricked five of its first six tries from the field.
• Still down 10-5 after a pair of free throw swishes by Coryon Mason, NM State finally turned things on offensively. A barrage of free throws and three-pointers keyed a game-changing 16-2 run that put the Aggies in control. The trio of Allen, Clayton Henry and Rice accounted for all of the points through that run with Allen's three free throw makes at the 14:18 mark pushing NM State in front by an 11-10 margin.
• The Aggies' 21-12 edge dropped down to five points, 22-17, following Airion Simmons' step-back triple with 9:53 to go. At that point, the offense stalled for both teams as no points were put on the scoreboard for a period of five minutes.
• That lengthy scoring drought was finally ended by Allen who drained a pair of freebies with 4:55 to go. Those makes signaled the start of an 8-4 NM State run to conclude the frame and Will McNair Jr.'s three-pointer with 1:48 on the clock hiked the Aggies' lead to their largest of the half, 30-19.
• NM State drained 40-percent (6-of-15) of its three-pointers in the frame while limiting the Wildcats to a shooting clip of just 26.7-percent through the opening 20 minutes of action.
• The Aggies' free throw shooting, to the tune of 8-of-11 (72.7-percent) helped things along, too. On the other side, Abilene Christian made just both of its freebies in the frame.

SECOND HALF
• The Wildcats kept on fighting, cutting the Aggies' lead down to six with 18:01 left on the strength of a Coryon Mason free throw make. Clinging to a 34-28 lead, Rice led a 5-0 run with a three-pointer and a pair of free throw makes to hike the Aggies' lead to double-digits, 39-28.
• Armed with that double-digit cushion with 16:02 left, NM State let the Wildcats get within fewer than 10 points just once more on the night. Mason drained a pair of shots from the foul line with 10:12 left which trimmed the Aggies' edge to 47-38, but buckets from Johnny McCants and Will McNair Jr., on consecutive NM State possessions pushed the Aggies' lead right back up to 13 points.
• Twice in the final seven minutes the Aggies' lead grew to its largest of the game, 17 points. The first came when Clayton Henry floated in a jumper with 6:34 left to make matters 57-40.
• A big part of NM State's second-half dominance was its bench. The Aggies' reserves accounted for 16 of the team's 36 points in the frame while helping their squad claim a 22-10 (+12) edge on the backboards through the stanza.

KEY PERFORMERS/STATISTICS OF NOTE
• Though he fouled out of the game late in the deciding frame, that didn't prevent Allen from laying claim to the title of WAC Tournament Most Valuable Player. The Phoenix, Ariz., product latched on to the laurel by finishing with 10 points, five rebounds and a trio of assists in Saturday night's championship bout.
• Rice joined Allen on the league's All-Tournament team after going for 11 points and a pair of rebounds. The night, though, belonged to a pair of players who received no All-WAC or All-Tournament recognition of any kind.
• Henry was vocal that his decision to return to NM State following the events of the 2020-21 season was the correct one. That opinion was backed up by his play Saturday night as the senior out of Calgary, Alberta, Canada, finished with a game-high 15 points as well as eight rebounds.
• Needing to spell both Allen (foul trouble) and Rice (nagging injury), McKinney Jr., played his best when it mattered most. The St. Louis, Mo., product came up big time and time again - especially when the Aggies were pulling away in the second half - eventually wrapping up his night with 10 points, four rebounds and a pair of assists. It was the energy and hustle of the junior which helped the Aggies win the day.
• A worthy opponent until the end, Abilene Christian never quit as the Wildcats sought to punch a ticket to the Big Dance for the third time in as many seasons. Coryon Mason finished with a team-high 14 points while Airion Simmons and Mahki Morris pumped in 12 points apiece.
• At the end, NM State's defense and rebounding allowed the Aggies to claim victory. The WAC's top seed owned a 44-28 edge on the glass which translated to a 13-5 edge in second-chance points.
• Defensively, the Wildcats couldn't get enough clean looks against the Aggies' superior size. Abilene Christian put up shooting splits of .327/.273/.750 on the night, mostly due to Will McNair Jr.'s size down low. The Philadelphia, Pa., product finished with eight points, a game-high nine rebounds and a plus/minus rating of +20 - the best figure of the night when stacked up against all players.
• The boost NM State received from its bench was massive. NM State owned a 20-10 edge in bench scoring, getting a shade under one-third of its point total from its group of reserves.
• For NM State, it will embark on the program's 23rd trip to the NCAA Tournament. Saturday night marked the third time in head coach Chris Jans' five-year tenure in Las Cruces in which he has led the Aggies to March Madness.

COMING UP NEXT
• NM State will find out exactly who - and where - it will be playing in the opening round of the 2022 NCAA Tournament Sunday afternoon at 4:00 p.m. MT on CBS when the 2022 NCAA Men's Basketball Championship Selection Show airs.