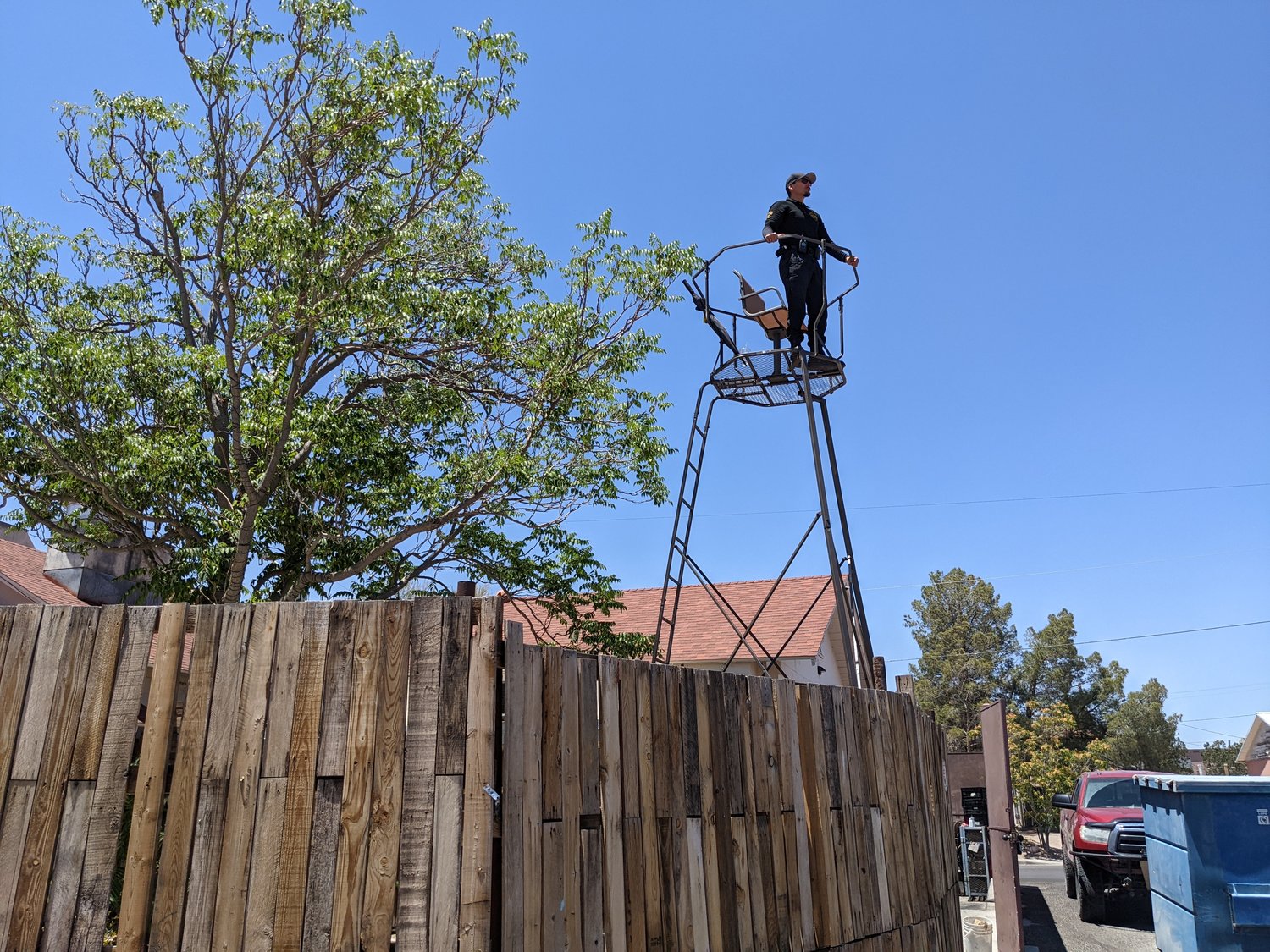 Business owner Marci Dickerson has installed a 20-foot stand for security to better keep an eye on her business, the Game.
Bulletin photo by Dave Burge
Posted Tuesday, May 31, 2022 11:34 am
By Richard Coltharp

Marci Dickerson is making a stand, both literally and figuratively.

The literal stand is a modified deer stand, positioned in the parking lot of the Game Sports Bar and Grill on Espina Street near University Avenue. From that 20-foot perch, a security guard watches over the parking lot and the area nearby, where multiple thefts have occurred recently, and damage done, to parked cars.

The figurative stand is a crusade against rising criminal acts, especially toward businesses and their customers, in and around Las Cruces.

“I’m making a stand,” said Dickerson, who owns the Game, the Game 2, and other businesses in Las Cruces.

She recently spoke publicly about the theft and vandalism with fellow business owner Wanda Bowman of Ashley Homestore, and Nicole Black, executive director of the Las Cruces Home Builders Association.

Ashley is in a shopping center at 3299 Del Rey Boulevard, and Bowman reported broken windows and other damages to businesses in the center. She also talked of vagrants sleeping on the premises and, one indelible image, a man walking around the parking lot wielding an axe.

Bowman, despite being 80, still works regularly with the energy of someone half her age. But you could hear the weariness in her voice about this issue.

“These problems have been in the big cities, and now it’s come to us,” Bowman said. Regarding the man sleeping at the store’s front door, “He was frightening for me.”

Black, speaking on behalf of local builders and contractors, reported increasing thefts from construction sites of lumber and other building materials.

A 4-6 p.m. meeting Thursday, June 2, was planned at the LCHBA offices at 2825 N. Main St., to gather more input from other businesses concerned about stealing and vandalism.

While we don’t have any real information confirming homelessness is on the increase in Las Cruces, there certainly appears to be an increase in these types of property crimes, as well as homeless and others acting out more brazenly. Many of these crimes are happening in broad daylight.

For about two years, the Las Cruces Police Department has been seriously understaffed, as much as 40 percent below capacity. Dickerson and others are adamant in not blaming LCPD for the increase in theft and vandalism. Quite the opposite, they deliver praise for local law enforcement.

“The Las Cruces Police Department has been very responsive and helpful when we’ve called,” Dickerson said, adding that, in several cases, the police have apprehended the perpetrators within a short time of the incident.

In many of those cases, however, Dickerson said the accused have been promptly released after judges’ hearings.

“It’s like catch and release,” Black said. “Offenders are arrested and then back out on the street the next day.”

The most dramatic case of catch-and-release came last year. In late April 2021, Joel Arciniega-Saenz was arrested and charged with four felony counts for burglary and criminal damage to property at Beck’s Coffee in Las Cruces. Despite the charges and previous troubles with the law, Arciniega-Saenz was not held in jail. A few weeks later, he was charged with, and initially confessed to, the murder and decapitation of Benjamin Montoya.

“This is not about bashing the police, and this is not about people who are legitimately homeless,” Dickerson said. “This is about aggressive vagrants who steal, vandalize and scare off customers.”

“I’m asking for change,” Dickerson said. “We demand better from our city council.”

Dickerson noted the city’s budget increases and recommended more be spent on police, starting with recruiting and pay, in order to help the department reach full staffing levels.

These issues are not limited to our city, our region, our nation or even the world. The pandemic has put millions of people on edge, inflamed existing mental health issues, and initiated or revealed others. Every town or city I’ve visited the last five years, regardless of size or location, has a problem with homelessness. Meanwhile, prices of homes have skyrocketed worldwide, and empty homes and building proliferate.

The problems are painful and complicated, and no one really knows where to start.