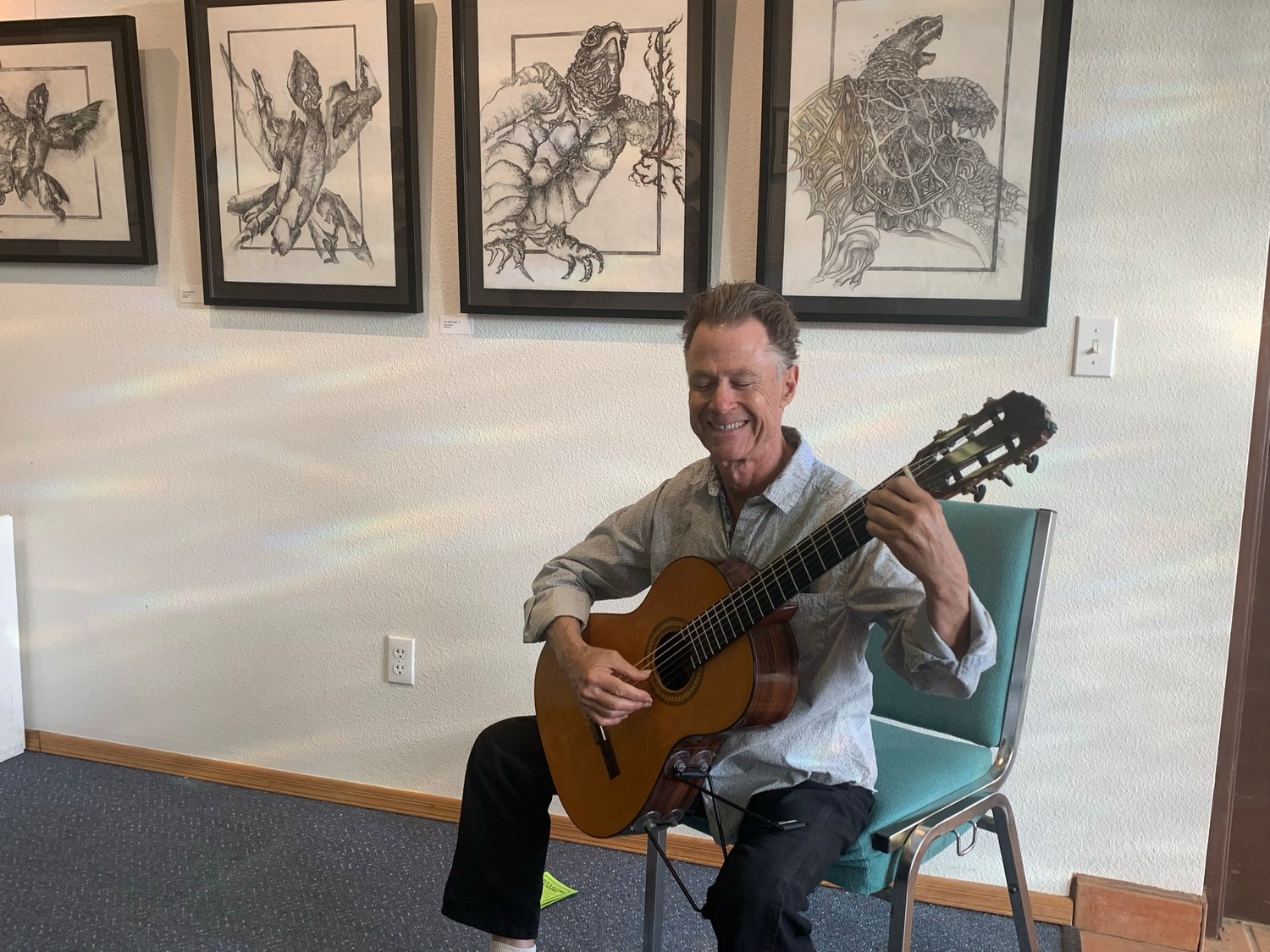 Hunter Beck plays his classical guitar for an art opening at the Tombaugh Gallery in May.
Photo by Elva K. Österreich 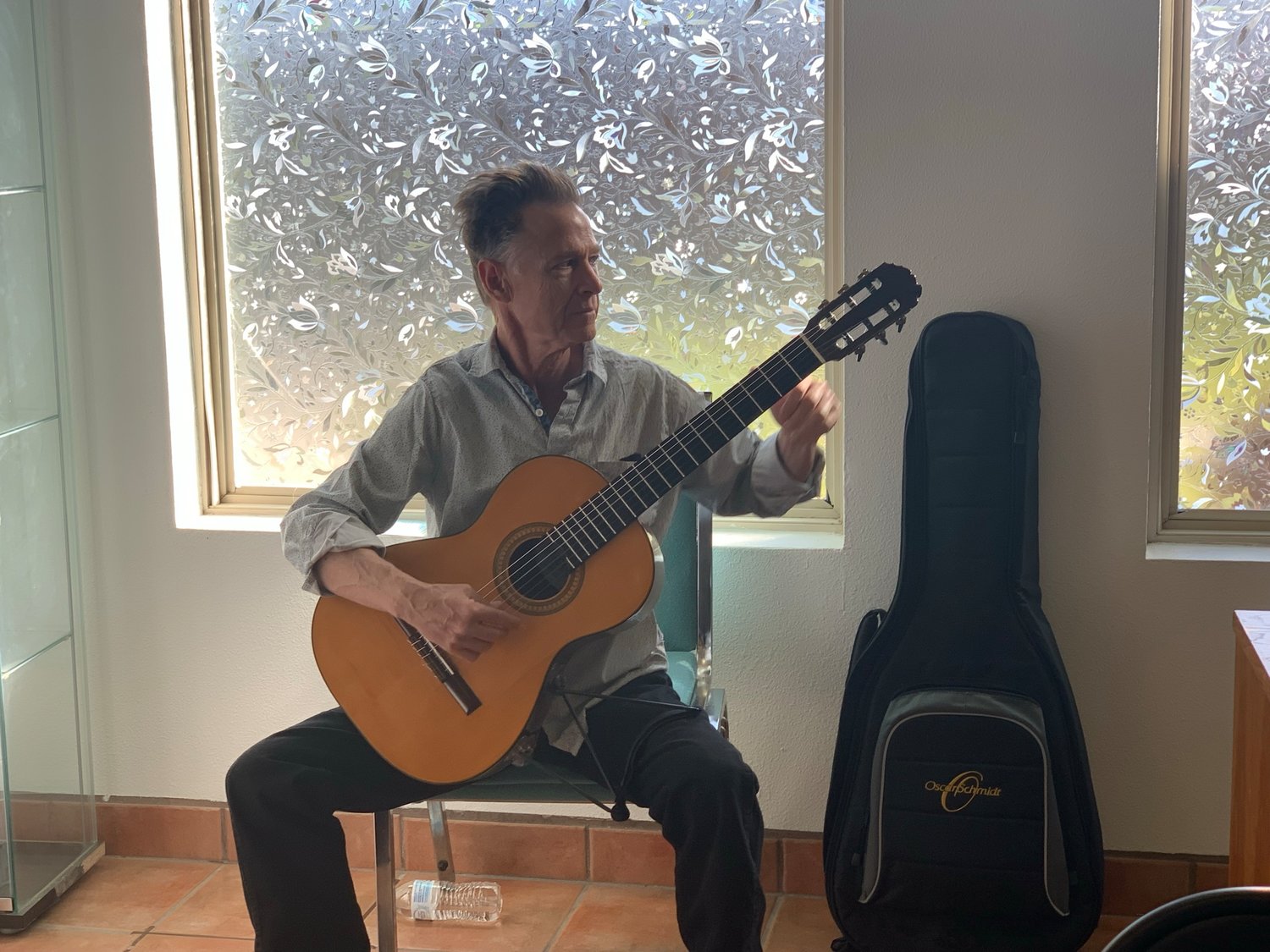 The classical guitarist practices six days a week. He slips into his music and, hopefully, his mind goes away.

“It becomes the music ideally,” Beck said. “It takes a lot of practice to get there – it’s fleeting. It depends on where you are. If I would have started when I was 5 years old, achieving that would be easier. You want to be where there is no hands, no fingers and the muse is connecting with the music.”

A roommate of Beck’s played guitar – had three different guitars -- and that started the musical journey. At the time Beck mostly played the roommate’s electric guitar because he enjoyed the sounds he could produce.

“When I was 21 and I went to the music store, there was a classical guitar on the wall, an Alvarez, and that’s what I took home,” he said.

He got some books and learned from them, and meanwhile got a job working for the phone company.

“About 5 years later, it was a spring day, I was on a telephone pole, and I said, ‘I’m going to climb down off this pole and go give my notice and go to guitar school.’”

So that’s how, at age 26 he found himself at the University of South Carolina working on his bachelor’s degree. Continuing his education, Beck got a teaching assistant scholarship and moved out west to Phoenix.

Finding Phoenix summers terribly hot, he started to play in Santa Fe in the summer. Graduating, he moved there, stayed for some 30 years.

“Santa Fe was really good in the 1990s and 2000s,” he said. “A lot of my musician buddies bought houses and did really well. But then they lost their houses in 2010; it (Santa Fe) really changed. It just got weirder and weirder, more and more rich people. I couldn’t afford to live there.”

So, he packed everything into his big old car and left. He went up through Colorado, down through Arizona, looking at various towns on the way.

“I went through all these mountain passes with my car fully loaded down, along with the bicycle and the dog,” he said. “Finally, I said ‘I guess Las Cruces it is.’ And when I saw it for first time coming in from the west I thought “OK, I’m home.’”

Before Covid, Beck had gigs around town. Now he is working to build his playing business up again. But even when he doesn’t have a gig, he practices and practices and focuses on balance. He also teaches Tai Chi.

“The modern lifestyle is push, push, push at the 95 level and it’s hard to maintain balance when you do that,” he said. “But the golden rule is the 70 percent rule. Never practice more than 70 percent of your capacity.”

Beck said he doesn’t think most Americans know what classical guitar is. It is a finger style, played on a Spanish nylon string instrument, he said.

“There is a whole repertoire of music for the classical guitar, but then you can really play anything that way,” Beck said. “The whole characterization of classical guitar is the texture, bass, lead and accompaniment. We use all five fingers. Why use a pick and deny the use of all these other fingers?”

Beck distinguishes between music and songs, saying they actually access different sides of the brain.

“As far as music goes, words access one side of the brain and musical tones access another side,” he said. “I follow the melody, follow the line, try to be true to the music and the composer. A lot of people will throw in a lot of funky things that are from themselves, because they think they are neat, so that kind of changes tracks on the intent of the composer.”

There are many variables in music interpretation, Beck said. It’s about what the listener is used to hearing and how long they have been listening.

“I have been listening,” he said. “It’s been my specialty for a long, long time.”