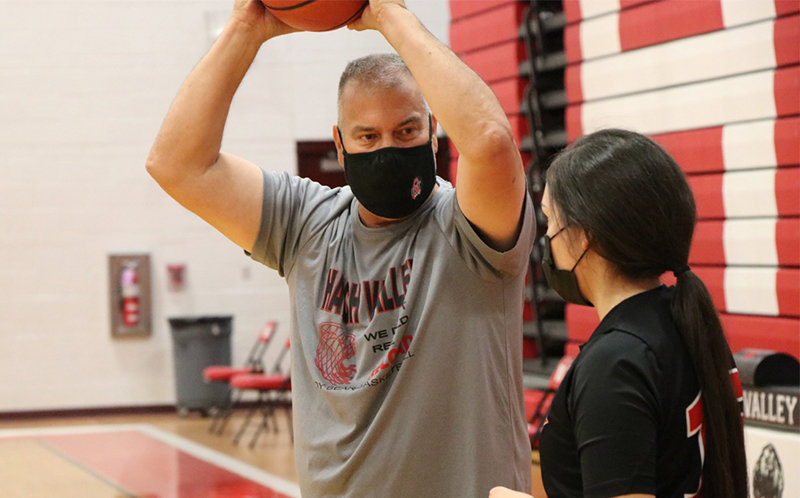 Hatch Valley girls basketball coach Ben Trujillo says coaching the game he loves has helped him deal with the death of his wife, Karen Trujillo, the superintendent of Las Cruces Public Schools who was killed when struck by a vehicle when she was out walking her dog in February.
Courtesy photo 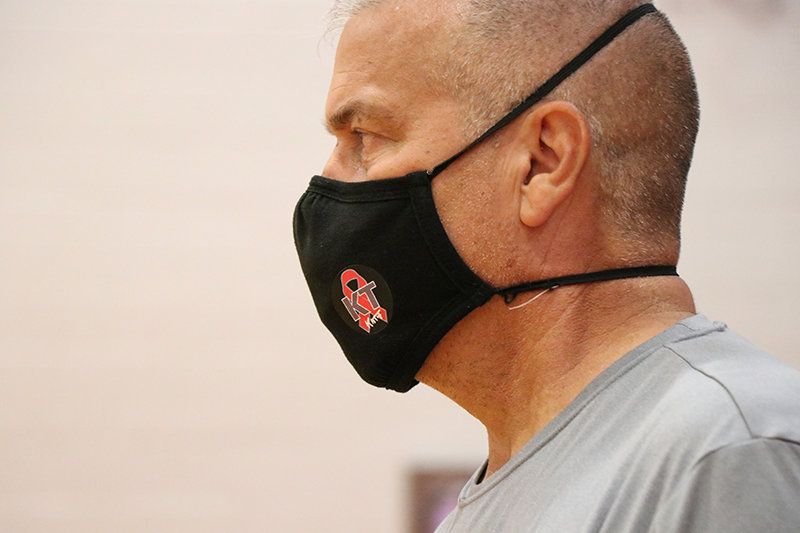 The Hatch Valley girls basketball team is off to a strong start this season.

“This is the most athletic team I’ve had here in Hatch,” said head coach Ben Trujillo.

The Bears have a roster with seven seniors.

“We can go 10 deep and we really don’t lose anything,” added assistant Taralyn Trujillo.

But one key member of the program is no longer with them. Back in February, New Mexico suffered a tragic loss when Las Cruces Public Schools Superintendent Karen Trujillo was killed after being struck by a vehicle while walking her dog.

“She was always there, even at our away tournaments,” said Hatch Valley senior Natalie Molinar.

“She helped with concessions. She literally did anything we would ask her to, but her passion was to come and watch these girls play and announce the games,” said Taralyn Trujillo, about her mother.

“There’s still those moments, whenever we have our home games, we’re used to her announcing every play and I still look over and wait for her to announce,” said Hatch Valley junior Makenzie Williams.

Following the death of his wife, it would be easy for Hatch Valley head coach Ben Trujillo to walk away from the game.  But instead, he embraced it. “Basketball to me has always been my oasis, my get out of stress-free card,” said Ben.  “I enjoy working with kids.  I guess you should if you’ve done it for 37 years, right?”

To help in the healing, Ben has his daughters by his side to help coach the program. “A lot of it is coping and it is helpful to do the stuff that we love,” said Tavyn Trujillo.  “He loves coaching; I love the sport.”

Teams are honoring Karen with stickers on helmets, and recognizing the Trujillo family before games.  Ben says the outpouring of support throughout the entire state has been overwhelming.

“The community across the state, all the stories they shared with me,” said Ben.  “I’ve said this many times, it’s like I have my own ‘Chicken Soup for the Soul’ book.”

“Like my dad says, it’s good for the soul to hear all the stories of things she did because she was very modest with things,” said Taralyn.

“We didn’t even realize how active of a person she was in other people’s lives,” added Tavyn.  “We saw the top level of it, but all the little stories, down to the detective.  Even he had a story to share of stuff she did for his wife.  It’s crazy how many people have reached out and shared amazing stories and tributes to her.  We’re not the only ones that lost her.”

Ben says staying involved and surrounding himself with loved ones helps get him through the grief. “Those kids, they help a lot,” he said with tears.

The games aren’t the same for the Trujillo family. A wife, mother and dedicated educator is no longer around, but the family knows that she is still with them every single day. “She’s cheering us on,” Taralyn said.  “My dad and I always say we have to put one foot in front of the other.  We can see her up there saying, ‘Keep moving forward, keep living your dreams, do what you’re supposed to do, don’t stop your life because I’m gone.”

The moment they’re in, right now, is a winning one.  With everything the program and their coach has endured off the court this year, what would it mean to see his team reach the state final for the first time in the history of the school? “I don’t know if I can verbalize what it would mean, but it would certainly be super special, super special,” said Ben.

Hatch Valley is seeded fourth in the Class 3A state playoffs, which began this week.