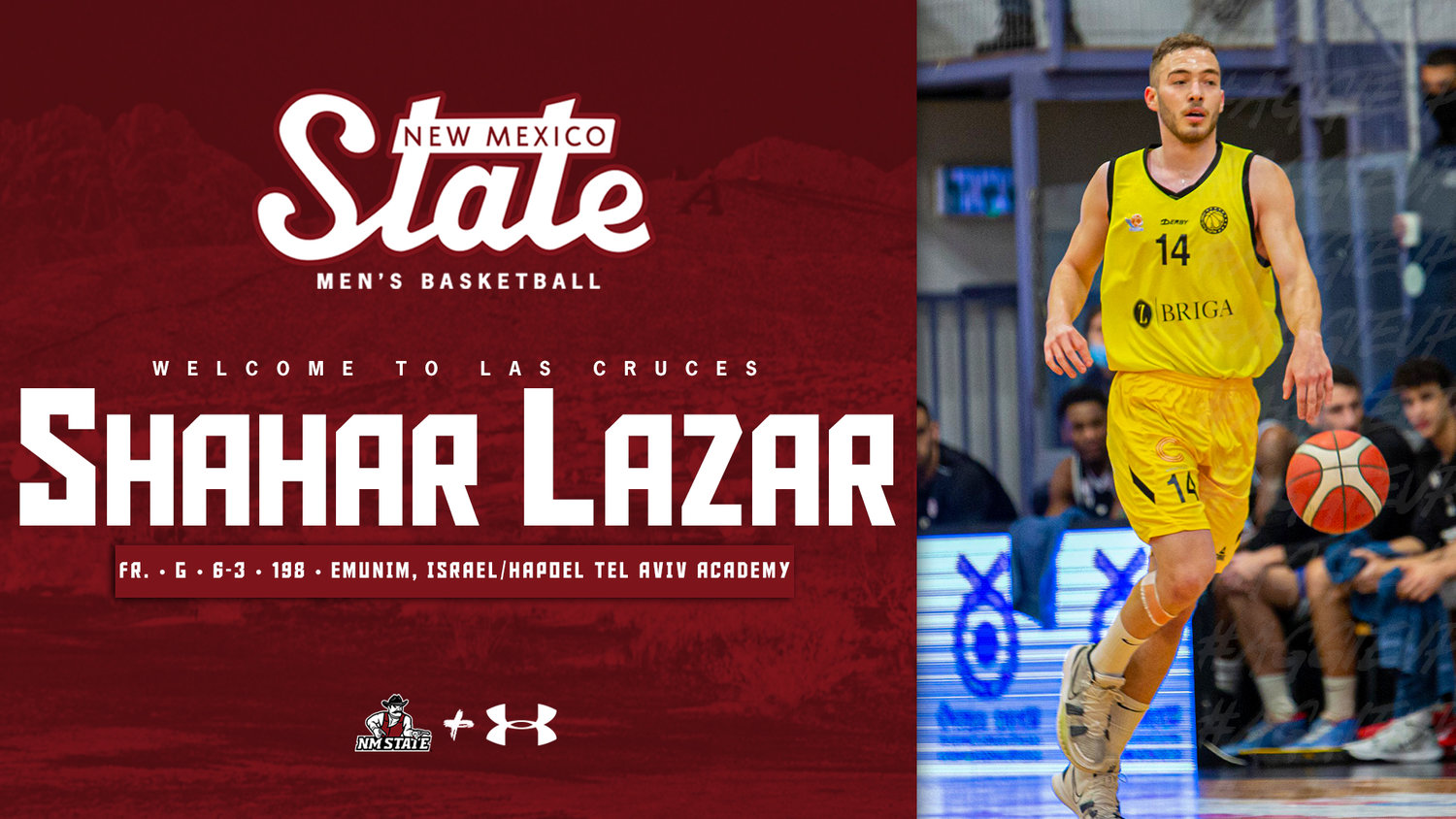 LAS CRUCES, N.M. - A trip of nearly 7,500 miles is what the newest NM State men's basketball player will embark on in order to link up with the Aggies.

As announced Thursday morning by NM State head coach Greg Heiar, Israeli freshman guard Shahar Lazar has inked a National Letter of Intent to suit up for the Aggies beginning in 2022-23.

Fresh off of competing in the top basketball league in Israel, Lazar adds depth and toughness to the Aggies' backcourt as the 2022-23 squad continues to come together.

Shahar Lazar | G | Fr. | 6-3 | 198 | Emunim, Israel/Hapoel Tel Aviv Academy
• The first-ever NM State player to call the nation of Israel home, Lazar most recently suited up for Elitzur Ironi Netanya - one of the 12 teams which comprise the Israeli Basketball Premier League.
• While logging minutes for one of the 12 best teams in his home nation, Lazar averaged 5.5 points, 1.7 rebounds and 1.1 assists per game. With Lazar on its roster, Elitzur Ironi Netanya advanced to the quarterfinals of the IBPL playoffs.
• One of the best prep players in the country, Lazar claimed a spot on Israel's U18 national team in 2019. In eight games at the 2019 FIBA U18 European Championship, the guard averaged 9.0 points, 2.6 assists and 1.5 steals per game.
• A premier defensive player, Lazar was one of three finalists for the 2022 Israeli Basketball Premier League Defensive Player of the Year.
• Verbal Commits lists Lazar as a two-star recruit as he prepares to begin his first season as an Aggie in 2022-23.

What they're saying about Lazar
NM State head coach Greg Heiar | "We are ecstatic to announce the signing of Shahar Lazar. Shahar is experienced playing against high level competition in his home country. He brings a wealth of experience and basketball intelligence to our program. He is a selfless person as he has put his life on the line for his country. Shahar is everything that I am about: a winner, selfless, tough, competitive, passion, personality and an exceptionally hard worker. He is another guy that brings as much energy to the defensive side of the ball as the offensive side. I think he is a player Aggie fans will really get behind. #AggieUp."

For complete coverage of NM State men's basketball as the Aggies continue to gear up for year one under Heiar and company in 2022-23, visit NMStateSports.com - the official home of Aggie athletics - and follow the Aggies on Facebook (NM State Men's Basketball), Twitter (@NMStateMBB) and Instagram (@NMStateMBB).