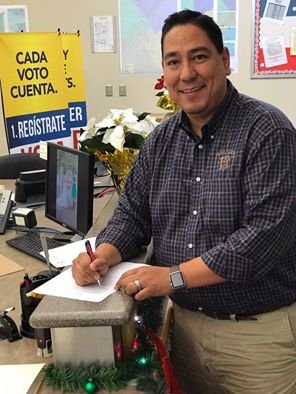 Las Cruces Public Schools Board of Education member Ray Jaramillo has decided not to accept any campaign contributions as he runs for a second term on the board in the Nov. 2 election.

Without yard signs, paid advertising or mailers, Jaramillo said his campaign is based on the relationships he has developed in the community and the “history of who I am and what I stand for.”

Jaramillo said he will “rely on my tennis shoes” in his campaign, as he walks his district and attends activities and events.

“I’ve never voted for anyone because they’ve had a fancy mailer or signs,” Jaramillo said. “I believe my district knows me,” he said. “I owe it to my community to have four more years to advocate for students and schools.”

Jaramillo is director of Alpha School, Inc. preschool in Las Cruces, and has  been with Alpha since 1995, he said.

Jaramillo has been LCPS board president since January, as board members have dealt with the death of a superintendent, hiring a new superintendent, “a huge budget crunch,” the ongoing pandemic, replacing a school board member and dissention over school district policy.

“Karen was my neighbor … my friend,” Jaramillo said about former LCPS Superintendent Karen Trujillo, who was killed in an auto accident in February. Jaramillo said Trujillo’s husband, Ben, knocked on Jaramillo’s door shortly after the accident last February and asked Jaramillo to come to the scene and be with the Trujillos’ daughters and their dogs.

With support from the school board, LCPS staff and administrators and the community, Jaramillo led the process of hiring new Superintendent Ralph Ramos “in a short amount of time,” Jaramillo said.

“Ralph is doing absolutely amazing,” he said. Ramos “is all the community could ask for.”

After board member Terrie Dallman resigned in June, Jaramillo guided candidate interviews and the selection of Pamela Cort as the new board member.

Jaramillo said LCPS Policy JBC, Equity and Excellence for All Students, which the board updated in July, came about because of a 2018 state district court ruling in the Yazzie vs. Martinez lawsuit mandating that the state provide “educational sufficiency” to all students.

The policy had previously been voted on without controversy, he said, and has only become an issue because of political rhetoric.

“There is nothing in the policy that mentions critical race theory,” Jaramillo said. The policy, he said, is “designed to support our students in giving them the necessary tools and education (and) the ability to look at education through multiple lenses.”

Students’ learning should include multiple “cultural and educational lenses,” he said.

“All types of how we learn are exemplified in JBC,” Jaramillo said, which allows students “to tap into the multiple ways we can view history.”

Nothing has changed since Policy JBC was implemented, he said. The board’s vote to update the policy “codifies what the district was already doing.”

Jaramillo said he and Ramos have met with a number of groups to talk about Policy JBC, “extending a hand,” he said, to facilitate discussion and understanding of the policy.

Jaramillo said LCPS is in the process of writing the regulation that will accompany JBC, and the school board is involving the community in writing it.

In addition to his school board campaigns, Jaramillo ran in the 2016 Democratic primary in the New Mexico House of Representatives District 36 race, losing to incumbent state Rep. Angelica Rubio.

Jaramillo became a published author this year with his children’s book, “Gust! Gust! Gust!” which tells the story of a young boy’s journey as he navigates his fear of the wind through playing the bongos.