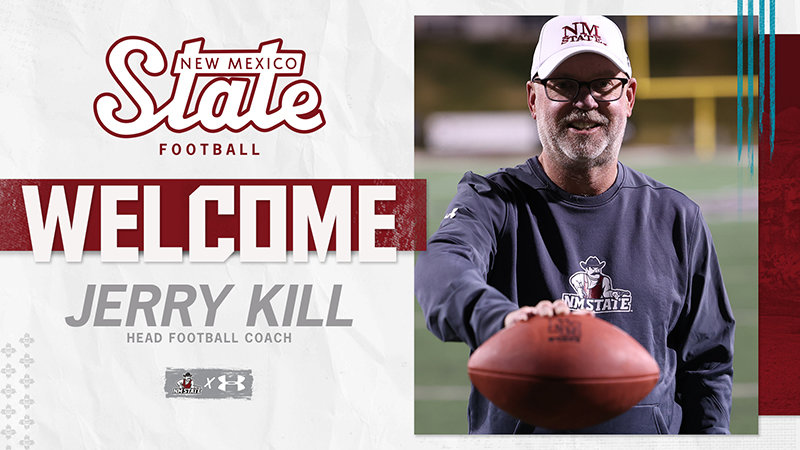 One of college football's most well-respected program rebuilders has been selected as the new leader of NM State football.

"As the Director of Athletics and an alumni of New Mexico State University, I couldn't be more pleased to announce Jerry Kill as our new head football coach," Moccia remarked. "For our program to attract not only a proven winner at multiple levels of football, but also someone who has consistently turned programs around, makes this a very exciting day for Aggie Nation."

Over the course of his 23-year career as a head coach at the NCAA Division II, FCS and FBS levels, Kill has generated a 154-101 record while making six bowl game appearances.

"Working daily with Coach Kill when we were at Southern Illinois University allowed me to witness first-hand the love and respect his players had for him as well as his work ethic and intensity," continued Moccia. "I also expect he will be embraced by our community in short order as he has been heavily involved in every community he has coached in."

During his half-decade in charge of the Cardinals, Kill directed his squad to five consecutive winning seasons which included successive 9-2 campaigns in 1997 and 1998. Through his final season in charge, Saginaw Valley State topped the NCAA Division II charts in scoring (42.5 points per game) while ranking second in total offense (498.3 yards per game). Under Kill, the ground game was a major strength of the Cardinals who led all NCAA Division II clubs in rushing in both 1997 and 1998.

Emporia State | 1999-00
After his father's untimely passing, Kill made a return to his home state in order to be closer to his family. He remained in the NCAA Division II ranks by taking over the reins of Emporia State University. Over the course of his two-year stint in charge of the program, the Hornets compiled an 11-11 record.

Southern Illinois | 2001-07
Kill's rise began in earnest when he was plucked from the NCAA Division II ranks by Southern Illinois ahead of the 2001 season. Tasked with turning around a program which had produced just two winning seasons out of the 17 that had occurred after capturing the NCAA I-AA national championship in 1983, Kill slowly but surely transformed the Salukis back into a national power at the FCS level.

Following a 1-10 mark in his debut season in Carbondale, Ill., Kill's team hit the double-digit win mark for the first time in 20 years by going 10-2 in 2003. That season coincided with the Saluki's return to the FCS Playoffs and set off a five-year run of greatness for Kill's program.

One of Kill's best teams was the 2004 edition of Southern Illinois who constructed a perfect 9-0 mark against FCS competition. That year, the Salukis generated a 7-0 mark in Gateway Conference action and held the number-one spot in the FCS national rankings for the final 10 weeks of the season. Kill's squad possessed one of the nation's best offenses, too, pounding opponents by an average of 30 points per game. His efforts that year resulted in Kill collecting the Eddie Robinson Award - a laurel handed out on an annual basis to the best head coach across all of FCS.

During 2007, Kill's final season in charge, the Salukis amassed the second-highest single-season win total in program history by going 12-2. Southern Illinois defeated a quartet of ranked teams that season and moved on to the semifinal round of the FCS Playoffs - the program's deepest postseason run since 1983. That season, Kill also became the first FCS coach in the history of the sport to be named the Liberty Mutual Coach of the Year. That laurel honors coaches who succeed on and off the field, displaying sportsmanship, integrity, responsibility and excellence.

Northern Illinois | 2008-10
Following his highly-successful run at the FCS level, an FBS program - Northern Illinois - came calling for Kill. Installed as the Huskies' head coach in December of 2007, Kill again wasted no time in bringing another program back to national relevance.

In the 12 years prior to Kill's arrival, Northern Illinois had reached a bowl game on just one occasion and were coming off a 2-10 campaign in 2007. Through his three seasons at the helm, though, the Huskies made their way to a trio of bowl games. That three-year bowl game run was capped by the team's appearance in the 2010 Humanitarian Bowl in which the Huskies hammered Fresno State, 40-17, in order to secure the program's first 10-win season since 2003.

All told, Kill compiled a 23-16 mark for the Huskies. During his final season as the program's leader, Northern Illinois constructed an 11-3 record which represented the highest win total in a single season in the history of the program. Kill's success with the Huskies set the stage for multiple memorable moments for the program, including an appearance in the 2013 Orange Bowl. By making the cut for that bowl game, the Huskies became the first MAC squad in the history of the league to appear in a BCS bowl.

Minnesota | 2011-15
Taking notice of Kill's reputation for resurrecting programs around the region, Minnesota decided to see if Kill could do the same for its Big Ten squad. Before Kill's arrival, the Golden Gophers had failed to reach the .500 mark in four of the last five seasons.

Named the Golden Gophers' head coach in December of 2010, Kill proved he could rebuild teams in the highest echelon of the sport by leading Minnesota to three-consecutive bowl game appearances (2012, 2013 and 2014) through his five-year run in The Land of 10,000 Lakes.

The 2013 and 2014 campaigns saw Minnesota produce identical 8-5 records after putting forth respective 4-1 and 5-1 starts. Kill's efforts in the 2014 season resulted in him being named the Big Ten Coach of the Year while also leading the program to its first New Year's Day bowl game in 53 years. A number of notable victories also came Minnesota's way in 2014 including its first against Michigan since 2005. Kill's triumph over Nebraska in 2014 marked back-to-back wins for Minnesota over the Huskers since the 1950s while his victory over Nebraska in 2013 was Minnesota's first since 1960.

Kansas State | 2016 | Associate Athletics Director for Administration
A series of health issues caused Kill to retire from the position as Minnesota's head coach midway through the 2015 season and signaled the start of a year-long hiatus from coaching for Kill. In May of 2016, Kill made the move to athletic administration by accepting the position of Associate Athletics Director for Administration at Kansas State

As a member of Athletics Director John Currie's senior staff, Kill served as the chief administrator for K-State's football program.

Rutgers | 2017 | Offensive Coordinator/Quarterbacks
Kill's first stint as a college athletics administrator lasted less than a year as he returned to the ranks of college football's coaches in December of 2016 when he accepted the position of offensive coordinator at Rutgers.

The Scarlet Knights operated with a run-heavy offense under Kill, which resulted in 147 rushing yards per game and played a major role in their 18 points per game average.

Southern Illinois | 2018-19 | University/Athletic Administration
Kill returned to Carbondale, Ill., in 2018 as a special assistant to the chancellor. Kill then moved back into college athletics when he accepted the role of the Salukis' Director of Athletics in February of 2019.

Virginia Tech | 2019 | Assistant to the Head Coach
Three games into the Hokies' 2019 campaign, head coach Justin Fuente tabbed Kill to join his staff as a special assistant. Virginia Tech went 8-5 that year and made a trip to the Belk Bowl.

TCU | 2020-21 | Assistant to the Head Coach/Interim Head Coach
Longtime friend Gary Patterson convinced Kill to join his staff in Fort Worth in January of 2020 in a role similar to the one he was in at Virginia Tech.

After Patterson was dismissed as the Horned Frogs' head coach on Oct. 31, 2021, Kill stepped in as the interim head coach and has since directed TCU to a 2-2 record. The first of those victories was a 30-28 home win over 12th-ranked Baylor - TCU's first victory over a nationally-ranked opponent since 2019.

PERSONAL LIFE
Much more than a football coach, Kill's civic honors are many as are his efforts as an advocate for epilepsy - a condition he has lived with for the majority of his adult life. Beginning with the formation of the Coach Kill Fund during his days at Southern Illinois, Kill also created the Chasing Dreams Coach Kill Epilepsy Fund during his time as Minnesota's head coach.

To this day, Kill continues to assist in fundraising monies for research for the National Foundation of Epilepsy. Kill's experiences as a head coach while living with epilepsy were chronicled in his 2016 book, "Chasing Dreams: Living My Life One Yard at a Time."

"This is a very exciting day in the history of our program and I would ask all Aggie fans to get in on the ground floor, purchase your season tickets and support this program as it will take everyone involved to reach our goals," Moccia concluded.

Four institutions, which include Southern Illinois (2014), Southwestern College (2004) and Kansas Sports (2016), have inducted Kill into their respective Halls of Fame. Hailing from Cheney, Kan., Kill and his wife, Rebecca, are the parents of two daughters, Krystal and Tasha. A grandfather, too, Kill has one granddaughter, Emery.