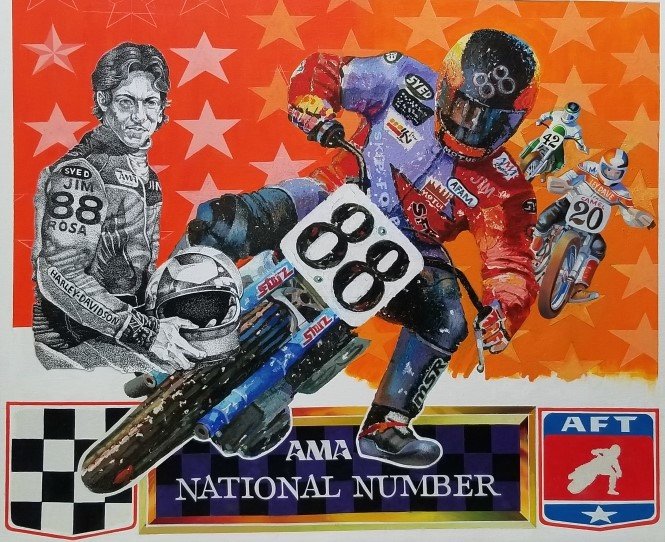 A painting artist Alex Rosa did for one of his sons, who races motorcycles professionally.
Photos courtesy of Maria Dolores and Alex Rosa 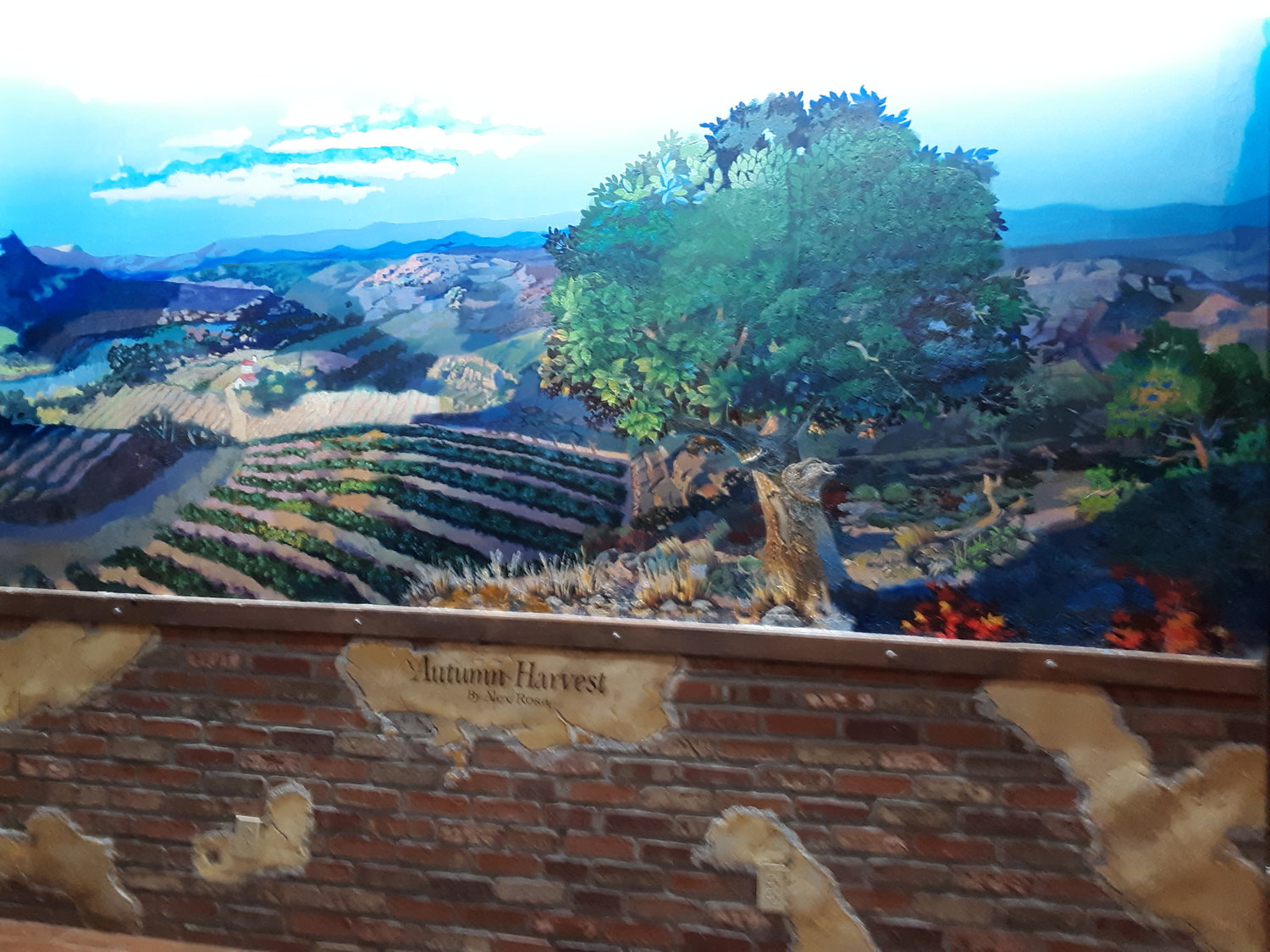 Another piece of art Las Cruces artist Alex Rosa is still at work on.
Photos courtesy of Maria Dolores and Alex Rosa 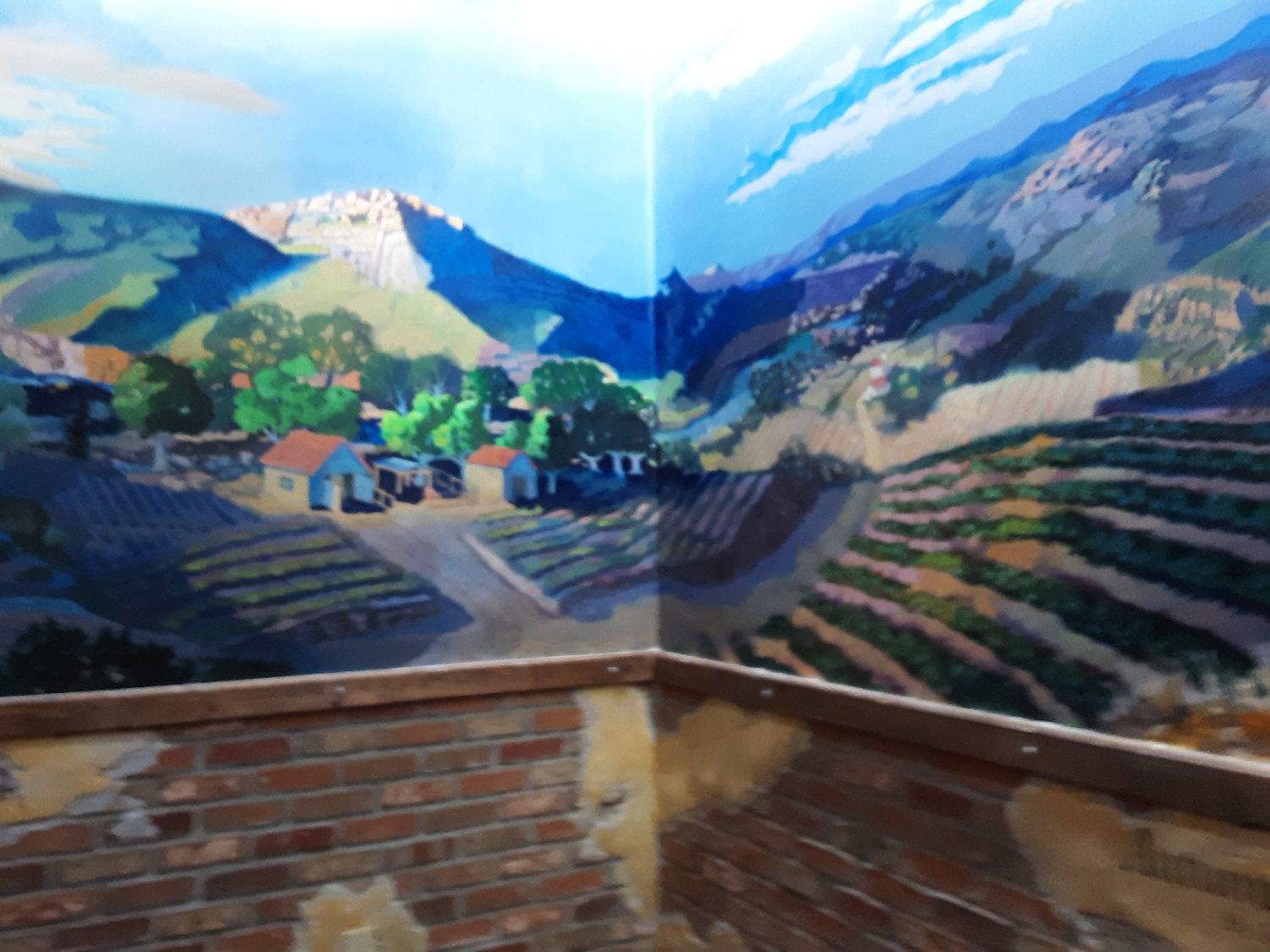 One section of artist Alex Rosa’s mural in the banquet room of Pastaggio's Italian Restaurant, 2022
Photos courtesy of Maria Dolores and Alex Rosa 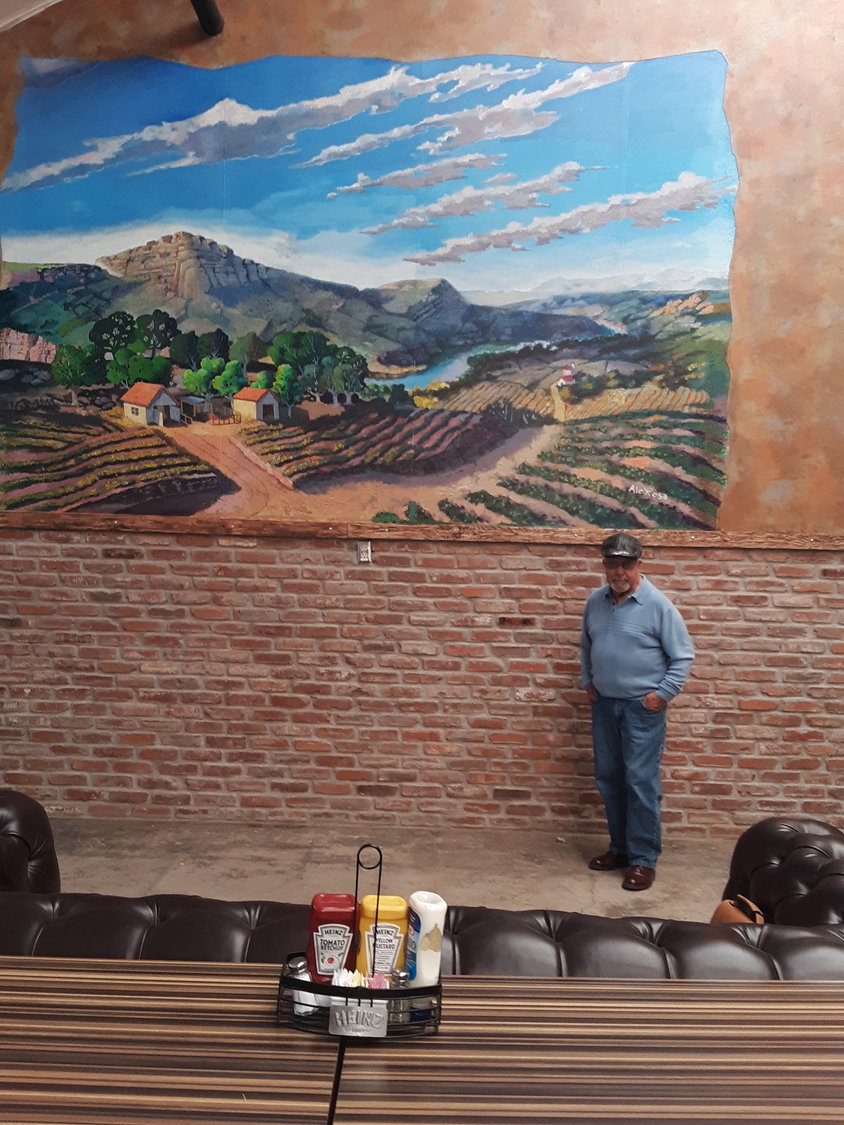 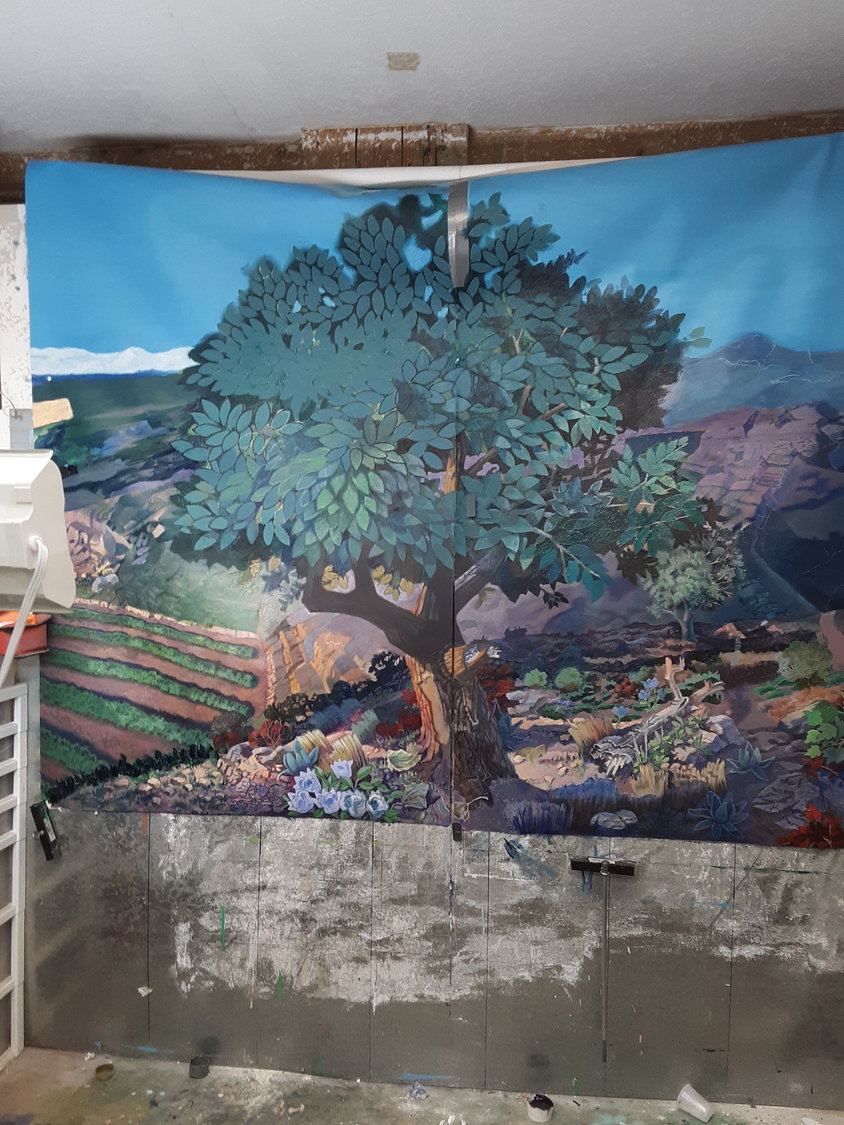 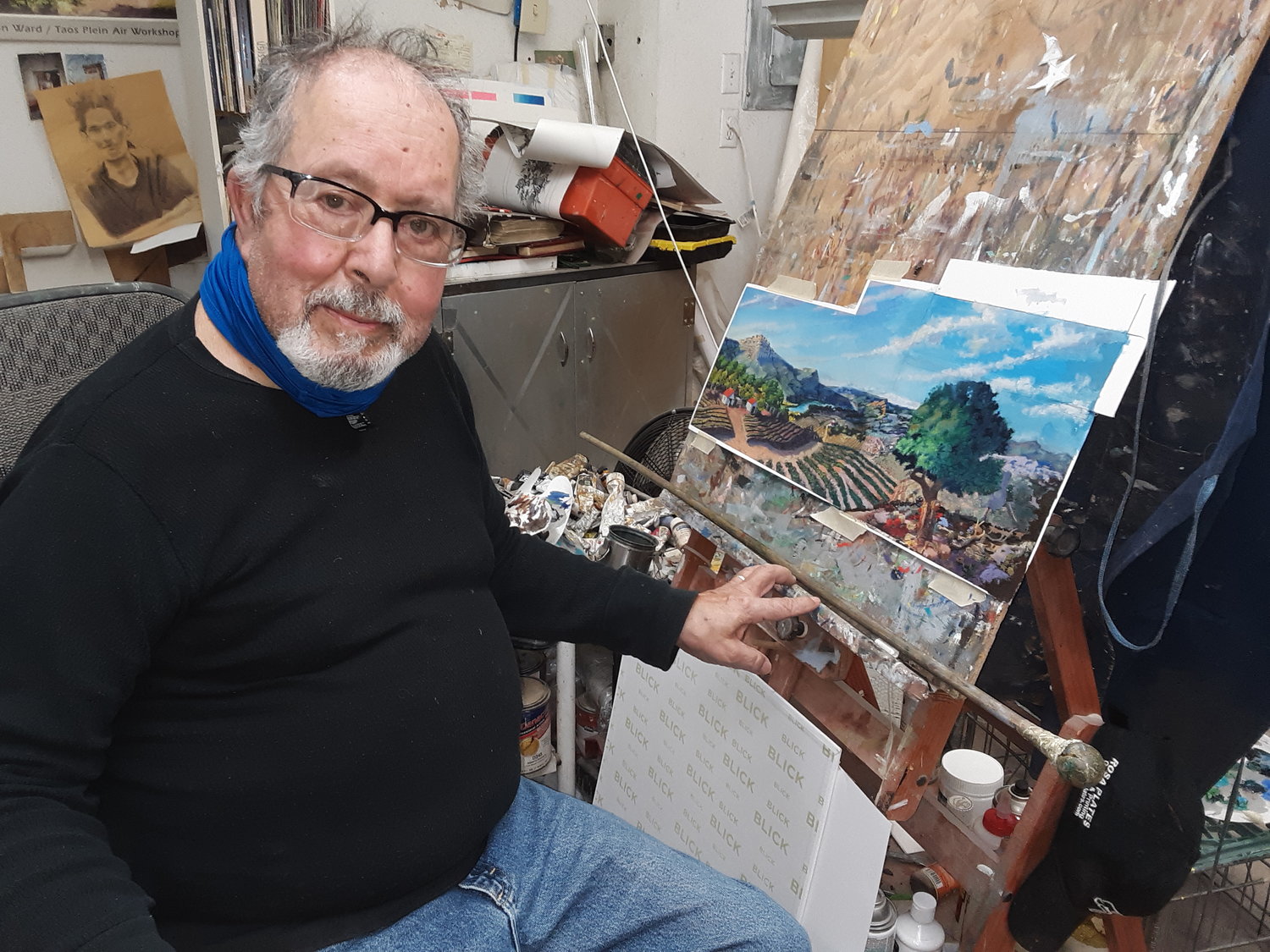 Artist Alex Rosa in his studio at home with a layout of his mural for Pastaggio's Italian Restaurant, 3000 Harrelson St. in Las Cruces.
Photos courtesy of Maria Dolores and Alex Rosa
Previous Next
Posted Monday, May 23, 2022 10:04 am
By Mike Cook

A native of San Diego, Rosa joined the U.S. Air Force at age 17. He trained as a fireman but spent a lot of time working on art projects, Rosa said. After leaving the Air Force, he kept being drawn back to art, deciding, “I guess that’s what I’m really supposed to do,” Rosa said.

He worked for Walt Disney Studios and was creative director for a billboard company, often working on billboards as large as 60 feet by 20 feet.

Rosa moved to Las Cruces in 1984 and owned his own sign company until he sold it in 2000. Since then, Rosa has dedicated himself full time to creating fine art and developing “that connection between my life and the person who created this world,” he said, “giving thanks for the opportunity to create like he did.”

Rosa said he marvels that God created the world in seven days.

“I’ve been working on this cloud for three months,” he said.

The cloud he is referring to is part of the vast mural Rosa has been working on for the past eight to 10 months in Pastaggio’s Italian Restaurant’s banquet room in Mesilla Park. Called “Autumn Harvest,” the mural is 25 to 28 feet long, he said, and 8 to 9 feet high. It covers two walls, with the design and colors used to hide a 90-degree angle where the walls come together.

Rosa also has painted an 84-foot by 17-foot mural in a Las Cruces industrial building, and murals for Chilito’s Restaurant, La Posta, Fountain Theatre, Lorenzo’s Restaurant and Rio Grande Theatre, along with 10 murals at White Sands National Park. He also has created murals in a number of private homes.

“You have to be a good listener,” Rosa said about painting murals. “You have to understand the client you’re working for,” he said, and how to translate what he or she wants into a work of art.

Rosa said his hope is to “leave something in my community that can be explored by other artists and visitors. That’s what I want to do. That’s what’s keeping me alive now.”