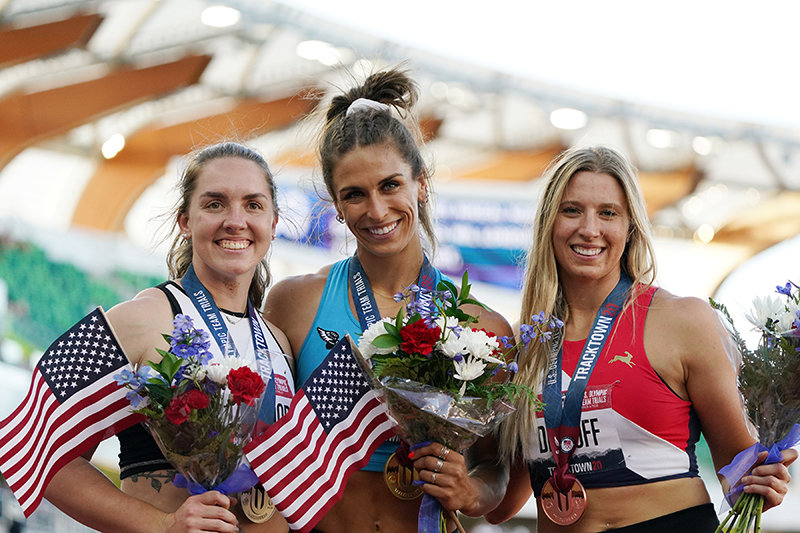 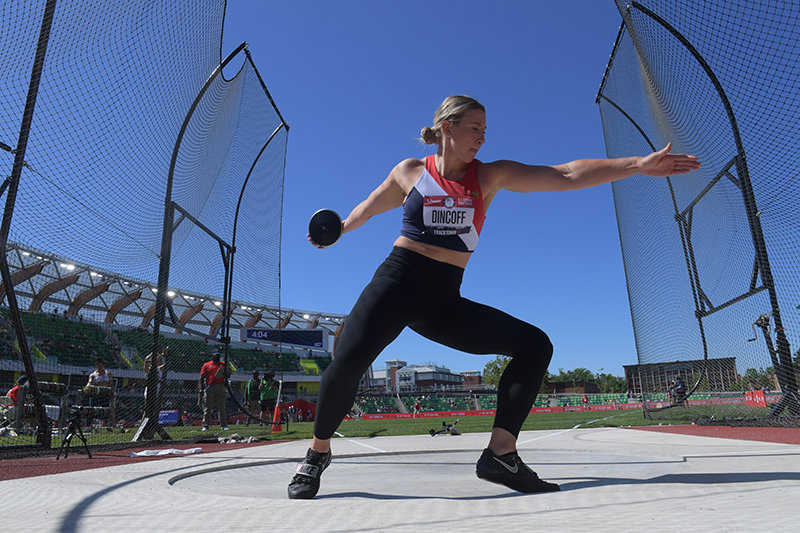 Rachel Dincoff, who has lived and trained in Las Cruces since 2017, competes in the discus at the Olympic Trials in Eugene, Oregon.
Photos courtesy of USATF
Previous Next
Posted Wednesday, July 7, 2021 5:34 pm
By Dave Burge

Ever since Rachel Dincoff was a teenager growing up in Indiana, she would draw the OIympic rings – along with a cross for her faith – on her mirror.

It was a way to keep her inspired and motivated during the ups and downs of pursuing her dream of one day representing the United States in the Olympic Games.

Dincoff, who has lived, worked and trained in Las Cruces since 2017, recently qualified for the Tokyo Olympics in the women’s discus.

“It is an unbelievable feeling,” said Dincoff, a native of Auburn, Indiana, who has served as a volunteer track coach at New Mexico State University for the past four years.

Dincoff was an All-American thrower at Auburn University in Alabama. After she graduated in 2016, she started working with Doug Reynolds, who at the time was the throwing coach at the University of Alabama.

Dincoff would commute, driving 5 hours round trip from Auburn to Tuscaloosa, at least once a week, to train with Reynolds. When Reynolds was hired to be the head track coach at New Mexico State, Dincoff followed him here to Las Cruces.

Since graduating from college, Dincoff has done a series of part-time jobs to help support herself financially and to continue to pursue her Olympic dream.

She has worked as a bartender, waitress and in retail.

“The only issue: I would be very exhausted by the end of the day,” she said. “I had to push through. I wanted to reach this dream and these jobs provided me with the flexibility to continue to train.”

She now works part-time remotely using her computer from her home for a family friend.

“That has been a game-changer,” Dincoff said. “I can actually get the recovery I need from my body and still have the flexibility to train. She is a huge supporter of what I am doing and understands and is flexible. I am very grateful to have fallen into that blessing. That has really helped me with my Olympic dream.”

At the Olympic Trials in Eugene, Oregon, Dincoff threw the discus 60.21 meters or 197 feet, 6 inches to earn the third and final spot for Team USA in the event.

Her qualifying throw came on her fifth out of six attempts. At the time, she was sitting in fourth place, one spot out of making the Olympic team.

Her goal for Tokyo is to set a personal-best mark. Her previous personal record was a mark of 64.41 meters or 211 feet, 4 inches at the Tucson Elite meet in May of this year.

Dincoff said the Olympics being postponed a year definitely benefited her.

“I am not sure how my season last year would have turned out, but I don’t think I would be in the same situation as I am now, if it wasn’t postponed,” Dincoff said. “The extra year gave me time to grow as an athlete and as a person as well. It gave me more time to learn and figure out what it takes to be successful at this sport.

“It’s a very tactical sport,” she continued. “I had to spend a lot of time figuring out my technique and what works best for me.”

The Olympics are scheduled for July 23 through Aug. 8, but will still be impacted by the pandemic. For instance, athletes will not be permitted to arrive until five days before their first event, Dincoff said. That means she will have to miss the Opening Ceremony but will still be able to stay in the Olympic Village while there.

“I’m very sad (about missing the Opening Ceremony), but I’m also very grateful to have this experience in general,” Dincoff said.

Dincoff said she loves living and training in Las Cruces.

The weather allows her to train year-round. She also loves the close-knit family-style atmosphere at NMSU and in Las Cruces in general.

“I am so grateful for all the support, all the love, for everyone reaching out,” Dincoff said. “I see it and feel it and am so excited to compete at the Tokyo Olympics.”