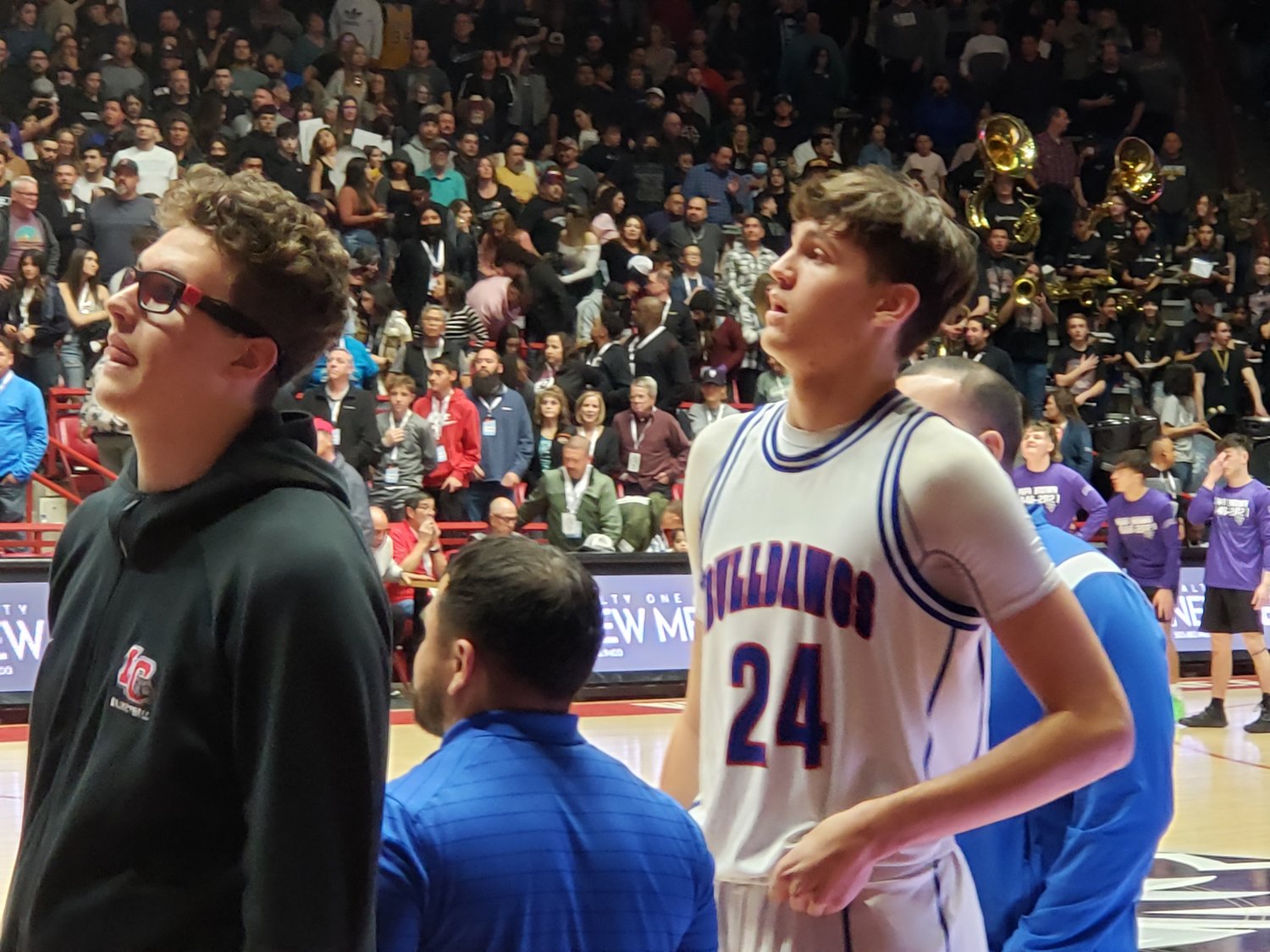 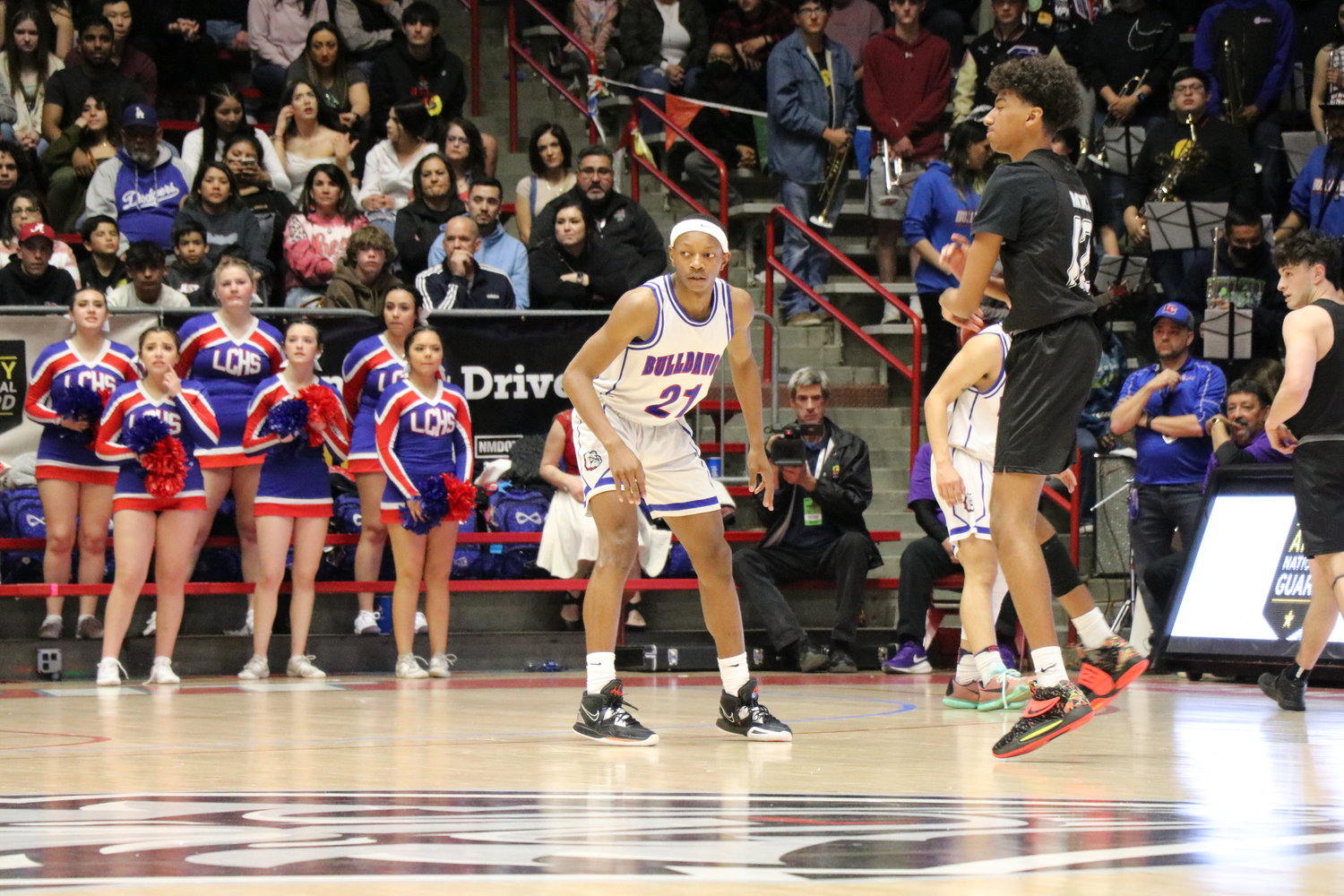 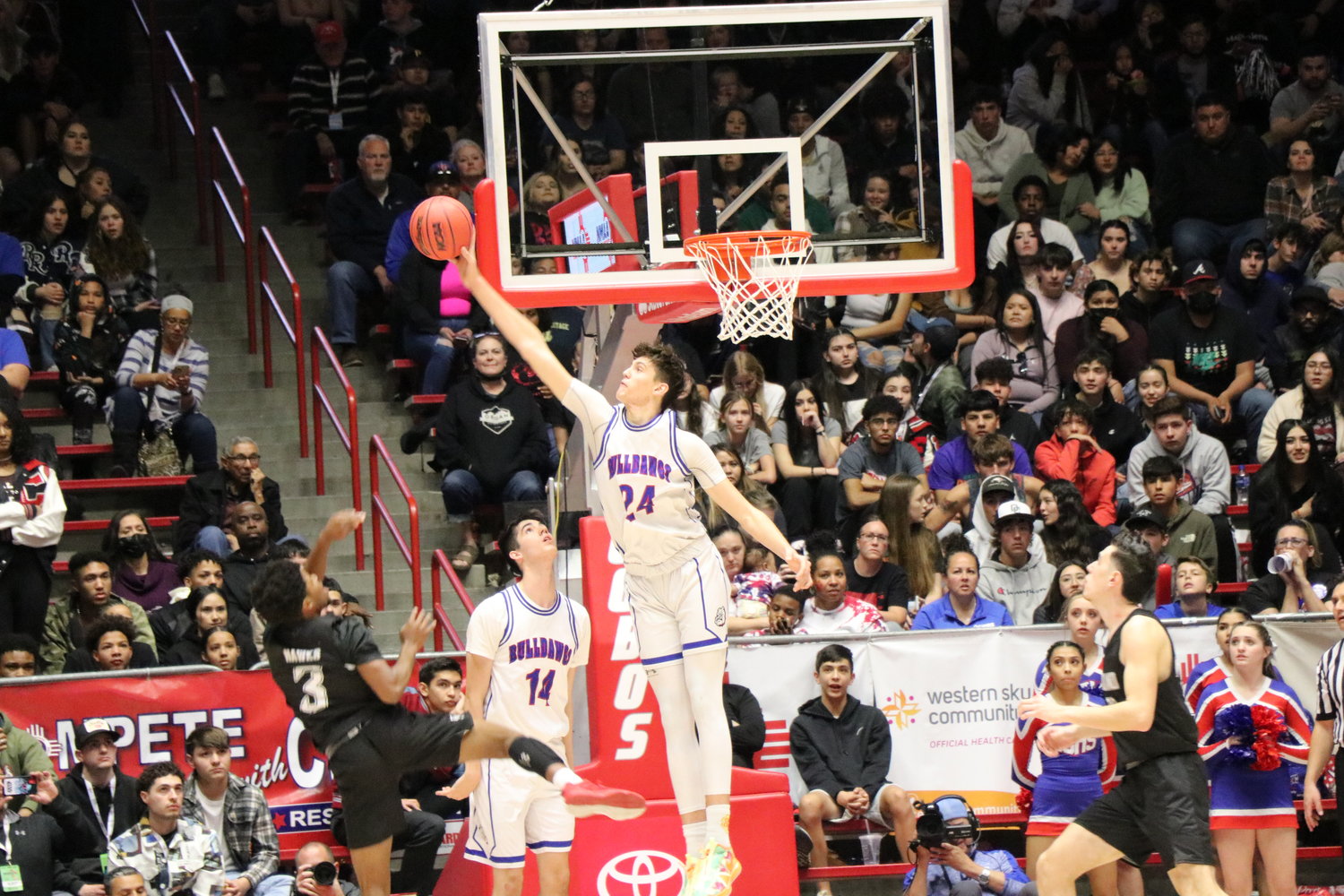 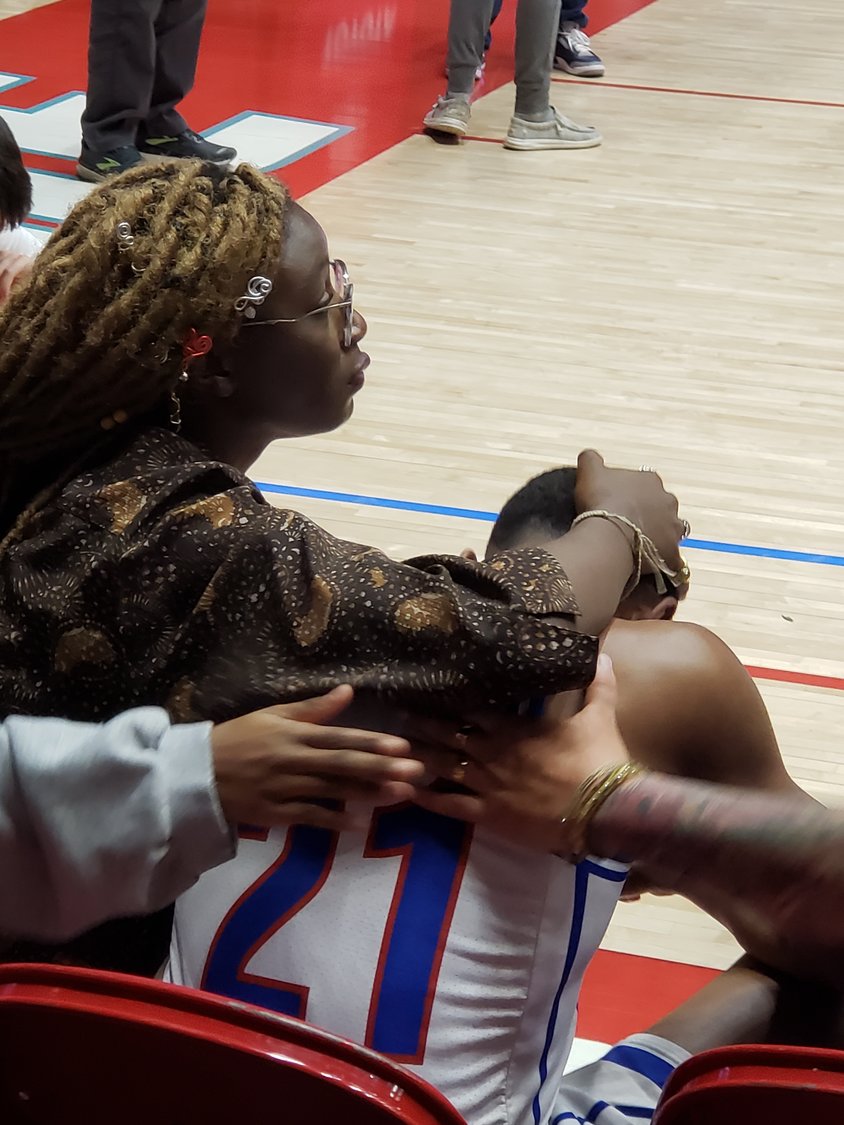 Deuce Benjamin is consoled after losing to Volcano Vista in the state 5A championship game.
Bulletin photo 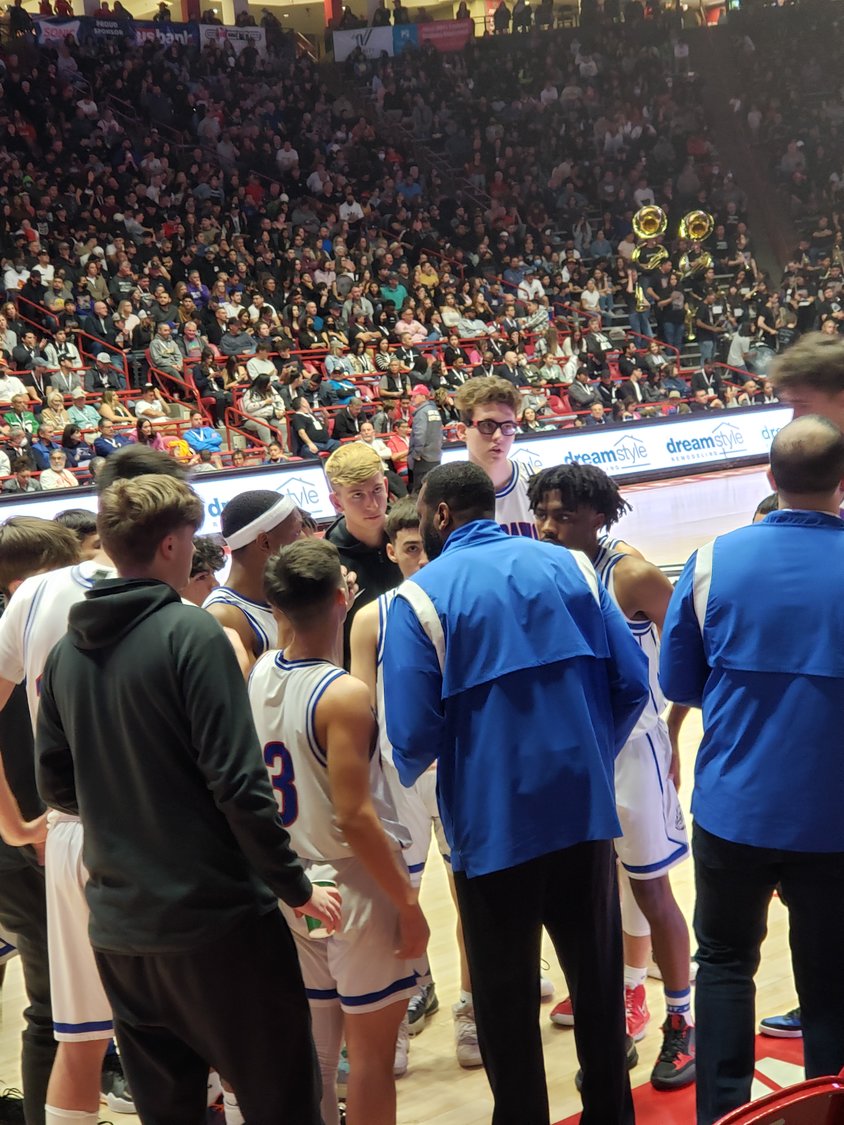 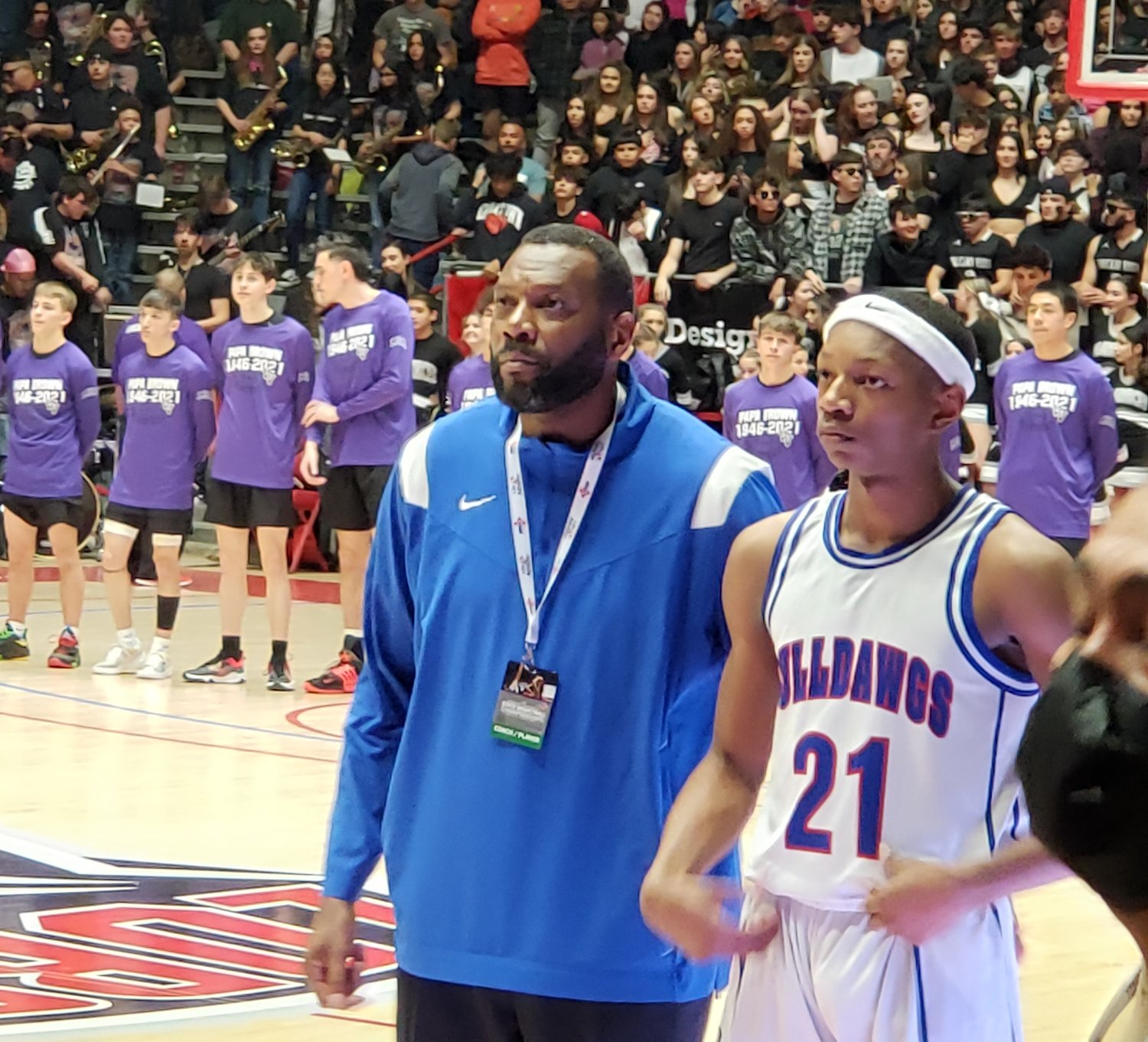 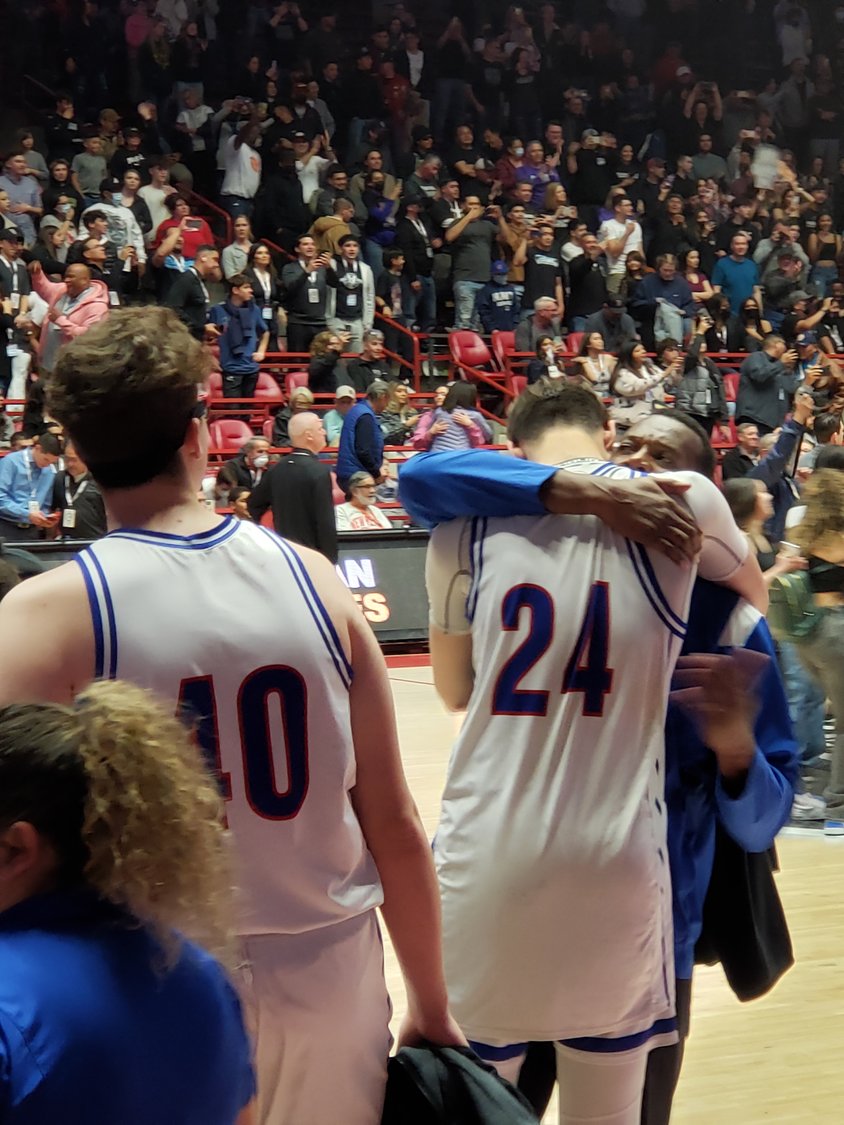 Losing in the state championship basketball game has a sense of finality to it.

Not only do you end up coming up short on your ultimate goal for your year and maybe your prep career, but for the seniors it marks the last time they will ever play together.

The Las Cruces High boys basketball team felt that pain for the second year in a row -- this time losing 66-55 to Volcano Vista of Albuquerque in the state 5A championship game Saturday, March 12, at the UNM Pit.

“It has been fun... crazy,” said Las Cruces High senior Kaden Self, often described by coach William Benjamin as the team’s “glue guy.”

“Meeting these guys freshman year, we really created a bond like brothers have,” Self continued. “Throughout the four years, it wasn’t even something I could dream of.”

The loss marked the end of an incredible three-year run led by seniors William “Deuce” Benjamin, Isaiah Carr and Self.

For the second year in a row, the Bulldawgs’ only loss of the season came in the state title game.

In all, Las Cruces reached the state title game three years in a row. The Bulldawgs won it all in 2020, but came up short the past two years.

The Bulldawgs, 31-1 overall, trailed by 10 heading into the fourth quarter against Volcano Vista and took the lead briefly down the stretch before Volcano Vista forced it into overtime.

Coach William Benjamin said he would gladly take this type of season any year and said they committed just too many turnovers in the state final (25 in all).

“It’s been spectacular, an amazing ride,” Benjamin said. “I’m very proud of them. We just had too many turnovers. It is amazing we made it to overtime with that many turnovers.

“They showed tremendous heart, didn’t give up,” Benjamin continued. “I’m very proud of them.”

The state final pitted two undefeated teams and the game lived up to the advance billing. Volcano Vista finished at 29-0.

“Welcome to the real world,” coach William Benjamin said. “Somebody has to lose. But you can’t fault the effort; that is for sure. They have nothing to hang their heads about. We went 31-1. I’ll take that every year.”

Benjamin said they had plenty of opportunities to put Volcano Vista away and win the game.

“We had our opportunities and ultimately that’s all you want is a chance to win. We had that,” he said. “We missed free throws at the wrong time. We had opportunities for steals and fumbled them away. Ultimately, we had way too many turnovers. But it was a tremendous season, a tremendous year and it was phenomenal to coach them, watch them develop and watch them grow up.”

Carr, who is heading to Grand Canyon University on a basketball scholarship, said his teammates have been like brothers to him.

“We all love each other,” Carr said. “We have been grinding together for a long time and the experience, to come out, play against a good team, come up short … it’s been an experience.”

Deuce Benjamin said he loved playing for his dad, told him he loved him during the media availability after the final game and thanked him for all the lessons he taught him about life and basketball.

Carr added 15 points, 17 rebounds and four blocks before fouling out.

Las Cruces survived quite a scare in the state 5A semifinal round and beat Atrisco Heritage Academy 50-45 at the UNM Pit Friday afternoon, March 11.

Las Cruces trailed at the half 17-15, and stared down a deficit at the break for the first time this season.

Coach William Benjamin said his team got “flustered” and stayed flustered for too long against an Atrisco team that played a physical brand of defense.

Benjamin said their defensive effort over the course of 32 minutes was the key.

“We have been solid defensively all year,” he said.

Self finished with six points, six rebounds and two blocks.