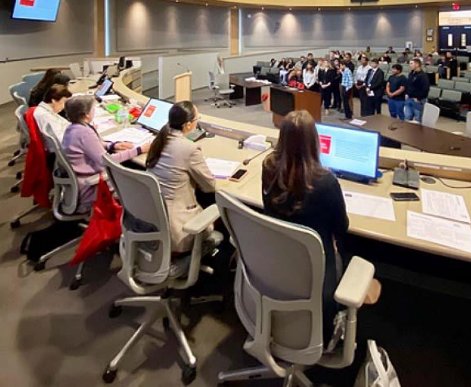 The League of Women Voters of Southern New Mexico (LWVSNM) is seeking nominations of individuals and small groups who have contributed to strengthening representative democracy for its second annual Making Democracy Work Award (MDWA). The winner will receive a $250 cash prize.

“Protecting and strengthening our democracy is more critical than ever before,” VanWie said.

work’ and our organization wants to recognize their efforts.”

The nomination form asks for a description of how someone has been civically engaged, including the promotion of JEDI principles — justice, equity, diversity and inclusion, said LWVSNM co-President Kathy Brook.

Civic engagement could mean involvement or promotion of civics education, service on public

committees, work on voter registration or submission of communications to a wide audience (such as

The nominee must be a resident of southern New Mexico. Current LWVSNM members are not

eligible for the award.

The nomination form, located on the LWVSNM website: www.lwvsnm.org, can be downloaded, filled out and sent to LWVSNM by any person who also resides in southern New Mexico. Forms should be sent via email to lwvsnm@gmail.com or by direct mail to LWVSNM, P.O. Box 15142, Las Cruces, N.M. 88004.

Winners will be selected by the LWVSNM board of directors based on weighted criteria available for review on the website, the news release said.

The winner will be selected by Feb. 14, the anniversary date of the creation of the League of Women Voters in 1920.

The first-year winners were Jamie Patterson and Josie Miller, academic content specialists from Las Cruces Public Schools, and Jamey Rickman, community engagement manager for the City of Las Cruces. The three were instrumental in the success of the project “Know Your Local Government,” which involved area high-school students in research, tours, discussions and presentations about

campaign in the late 1990s, to maintain the strength of our representative democracy in the hands of the people at every level of government. It focused on five key indicators of a healthy democracy: voter