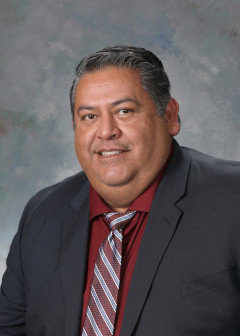 As he seeks a third term in the New Mexico House of Representatives, state Rep. Willie Madrid is campaigning in a newly redrawn district that includes more of Las Cruces in addition to Chaparral, an unincorporated community that is divided between Doña Ana and Otero counties. He will also have a new opponent in November.

Madrid is the only Democrat on the ballot in the House District 53 race. He first ran for the seat in 2016, losing in a close race to Republican incumbent Ricky Little. Both live in Chaparral. The two squared off again in 2018 and 2020, with Madrid narrowly winning both races. Little filed to run for the seat again this year, but withdrew, leaving Elizabeth L. Winterrowd of Las Cruces as the only Republican on the ballot.

For Madrid, Chaparral is divided not only by the county line, but by a stark political contrast between blue and red: Doña Ana County is a stronghold for Democrats, while Otero County is staunchly Republican.

And, because Chaparral is unincorporated, local governance is controlled by the two county commissions.

Madrid said Chaparral has received cooperation from Doña Ana County but not from Otero County, which he said has “no love for Chaparral.”

For example, Madrid said, Otero County rejected his proposal to provide $500,000 in capital outlay funds to pay for a splash pad near Yucca Elementary School on the Otero County side of Chaparral.

Otero County, Madrid reported, “said ‘No, you’re building something we have to manage and operate.’”

Madrid said he could have addressed the county’s concerns about paying employees to man the splash pad with additional state funds and would have worked with the county on paying for the water the project would use.

Madrid said the lack of cooperation he has experienced from Otero County for the past four years has led him to ask for guidance from state officials and agencies, including Attorney General Hector Balderas and state Auditor Brian Colon, the New Mexico Association of Counties and the New Mexico Municipal League.

Madrid said he also looks forward to working with state Sen. Joseph Cervantes, a Las Cruces Democrat, whose District 31 will, as a result of redistricting, include the Otero County portion of Chaparral that is currently represented by state Sen. Ron Griggs, an Alamogordo Republican.

Madrid said he also will continue to push for Chaparral to incorporate so it will have its own local government.

“This isn’t about Willie Madrid wanting Chaparral to become incorporated,” he said. “It’s about bringing the process to the people and letting the people vote.”

Chaparral, he said, has about 30,000 residents who “need to be able to stand up for ourselves.”

The community could also consider becoming its own separate New Mexico county, Madrid said, or a local government like Los Alamos, New Mexico, which is an incorporated county that has both county and municipal authority.

“I want another feasibility study for another opportunity for incorporation,” he said, noting that Chaparral voters’ rejection of incorporation happened nearly 20 years ago.

With the redistricting that takes effect next Jan. 1, more than 40 percent of District 53’s population will be in the Sonoma Ranch area of Las Cruces, Madrid said, while about a third will be in Chaparral.

If re-elected, Madrid said he will represent the entire district.

Madrid was born in El Paso and raised in Chaparral. He retired as a member of the Gadsden Independent School District’s education support staff and is a long-time coach in a number of boys and girls sports.