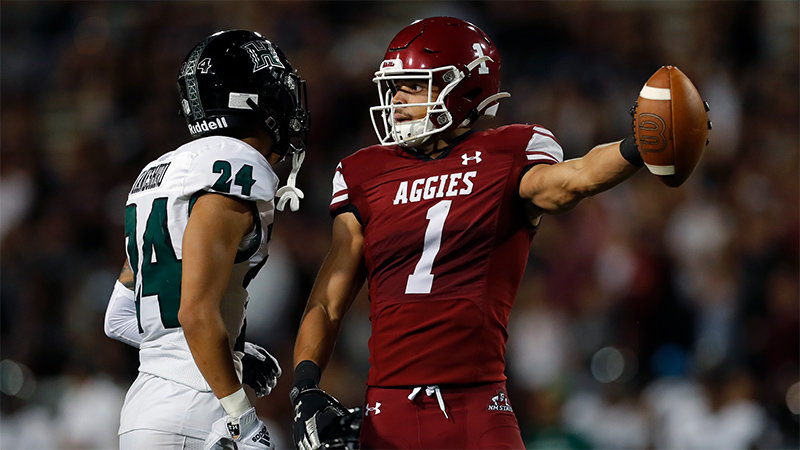 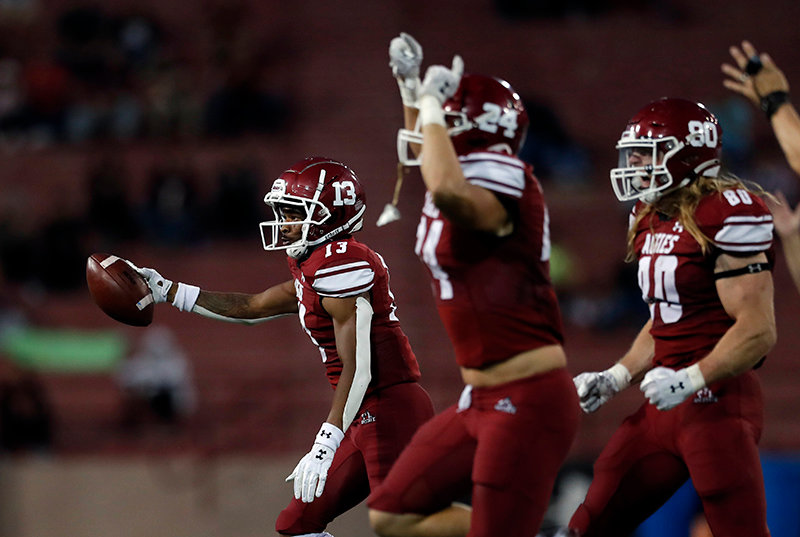 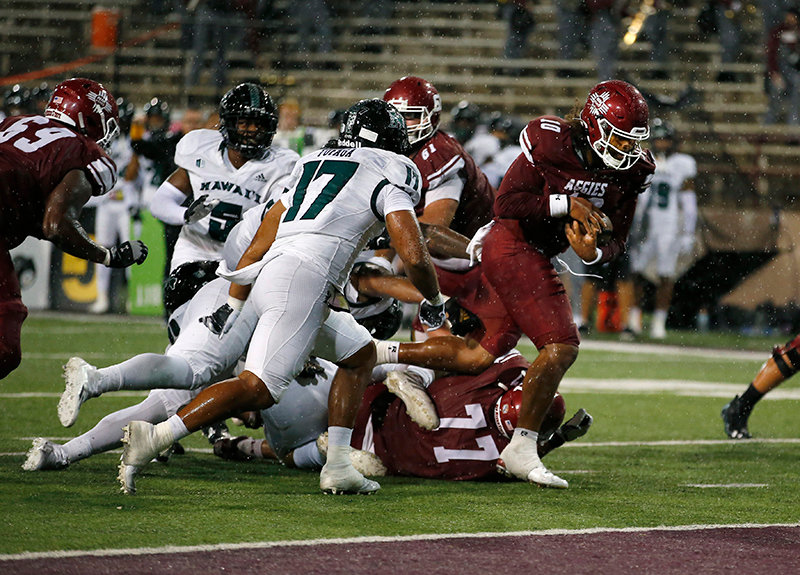 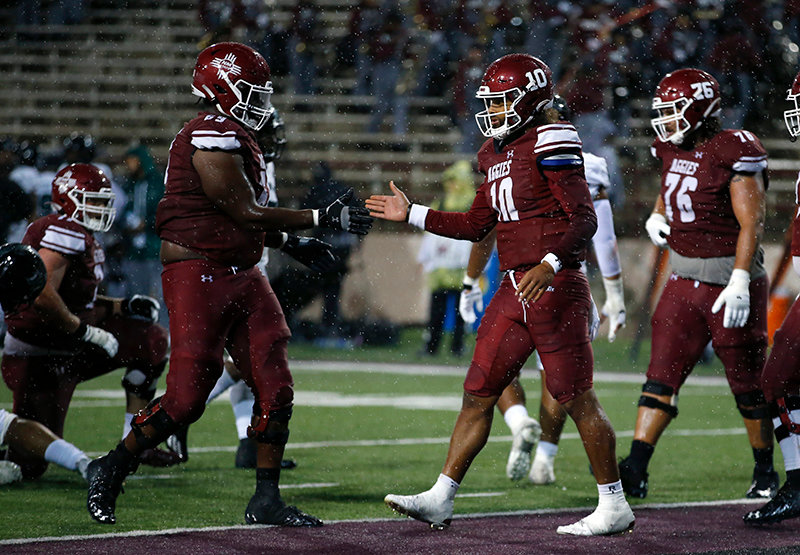 In defeat, QB Jonah Johnson completed 28-of-47 passes for 280 yards and a passing touchdown. On his birthday, NM State (1-4) WR Jared Wyatt hauled in a career-best nine catches for 114 yards. Wyatt became the first Aggie since Naveon Mitchell to haul in 100 yards (Sept. 18, 2019; @New Mexico) in a game.

The turning point in the contest was a Jonah Johnson second-quarter lateral that was deemed backward. The ball was scooped up and returned by Hawaii's (2-3) Cameron Lockridge for a five-yard touchdown. Saturday's Mountain West crew did review the play, but the call on the field stood, giving UH a 17-3 lead with 13:31 left in the opening.

HOW IT HAPPENED:
For the fourth time in five weeks, the Aggies received the opening kickoff, and for the second consecutive week scored on the opening drive.

Johnson and the Aggies marched the ball to the Hawai'i 13, but a sack of Johnson by the Warriors O'tay Baker and DJuan Matthews forced a 33-yard field goal from kicker Ethan Albertson. The kick gave NM State a 3-0 lead with 9:33 remaining, and capped a 12-play, 60-yard drive that amassed five minutes and 27 seconds.

On Hawai'i's very first offensive play from scrimmage, QB Chevan Cordeiro hit WR Nick Mardner for a 74-yard touchdown that gave the Warriors a 7-3 lead with 9:19 left in the first period. Cordeiro finished 16-of-25 from 277 yards, the touchdown and one interception. The QB also ran 31 yards and a score. Mardner ended the contest with four catches, for 120 yards and a score.

After an NM State punt gave Hawaii possession of the football at their own 38, Cordeiro orchestrated a nine-play, 54-yard drive that ended in a Matthew Shipley 25-yard field goal. The kick gave the visitors a 10-3 lead with 3:26 to play and would be the final scoring play of the opening quarter.

Following a stalled Aggie drive, UH took over at its own 20-yard line. Cordeiro and the Warriors managed three first downs on the ensuing drive before the Aggie defense forced another Shipley punt.

Taking over down 10-3 with 14:16 to play in the opening half, Johnson completed a five-yard pass to Wyatt.

On second and five, Johnson dropped back to pass, attempting a swing pass to running back O'Maury Samuels. The pass was batted down by Hawaii's Quentin Frazier.

Instead of deeming the ball incomplete, and the play dead, referee Derek Anderson deemed the ball live. After ball rolled to the NM State five, Lockridge alertly ran the ball in for a touchdown. After review, the call stood, giving Hawai'i the aforementioned 17-3 advantage with 13:31 to play in the second period.

Needing a response, Johnson led his team on a five-play 71-yard drive that was jumpstarted by a 52-yard heave to Wyatt. The WR was tackled by the back of the jersey, prompting a horse-collar tackle call on Lockridge.

The penalty placed the ball at the UH seven. After a one-yard rush by Johnson on first-and-goal, the QB hit Robert Downs III for a six-yard touchdown that cut the Hawai'i lead to 17-10 with 11:27 to play.

After a false start penalty and a two-yard sack by linebacker Chris Ojoh, backed Hawai'i up to their own 18, a Dae Dae Hunter 14-yard rush set up third down and three.

UH gave the ball back to Hunter, and the running back advanced to the Hawai'i 37, before he was stripped by cornerback Syrus Dumas. The ball was recovered by linebacker Nick Giacolone, giving possession back to the Aggies.

An eight-yard first-down rush by Juwaun Price and a 25-yard scamper on the next play set the Aggies up at the UH four with a first and goal situation.

After a screen to WR Isaiah Garcia-Castaneda pushed Aggies to the two, Johnson tried to rush the ball into the endzone but was stopped at the one, setting up a third down and goal.

Johnson rolled out on the ensuing third down play and floated a pass in the direction of Garcia-Castaneda that fell incomplete.

The incomplete pass forced the Aggies to settle for a 20-yard Albertson field goal that brought the Aggies to within 17-13 with 7:58 to play.

On the ensuing drive, Dumas made another big play for the Aggies, when he intercepted a Cordeiro pass at his own 12-yard line. The Independence CC transfer returned the ball to NM State 29, setting up Johnson and the Aggie offense with 6:16 to play.

Johnson converted a pair of third downs on the next possession marching the ball to the UH 12, where he faced a first down and 10.

After a two-yard rush by Samuels placed the ball at the Warriors 10, Johnson's second-down pass for Garcia-Castaneda was broken up, setting up a third and eight. On the ensuing play, Johnson completed a pass to Wyatt, but the wideout was stopped for no gain with 44 seconds to play. Albertson and the Aggies attempted a 29-yard field goal on the next play, but the kick sailed wide right.

Hawai'i took over at their own 20 and marched the ball to the NM State 40, but DJ McCullough broke up a Cordeiro heave at the goal line as time expired in the first half. The play was the final play of the first half, as Hawai'i took a 17-13 lead into the break.

On the first possession of the second period, Cordeiro and the Warriors marched the ball to Aggie 43, but a Dalton Bowels pass breakup forced UH into a fourth and four situation.

After trying to draw the Aggie's offsides and calling timeout, Cordeiro attempted a quick kick that bounded into the endzone.

On the next two drives, NM State and Hawai'i would exchange punts, giving the Aggies possession of the ball down 17-13 with 8:40 to play in the third period.

After advancing the ball to Hawai'i 41 ahead of third down and three, Doro Omheri was whistled for a false start. The penalty forced NM State into a third down and eight situation.

On the aforementioned third and eight, Johnson was sacked and stripped of the ball by Khoury Bethley. Bethley recovered the fumble at the NM State 38.

Hawai'i and Cordeiro answered the forced fumble with a seven-play, 38-yard drive that culminated in a one-yard rushing score by Cordiero that gave Hawai'i a 24-13 lead with 2:24 to play in the third.

Following the score, the rain intensified, forcing another Aggie punt.

With the wind whipping and rain pouring down, NM State's normally dominant punter Josh Carlson punted the ball to midfield with 34 ticks in the third quarter.

On the second play of the fourth quarter and following a 41-yard rush that advanced the ball to the NM State 14, Calvin Turner Jr. looked to be stopped for a loss multiple times.

But the running back broke multiple NM State tackles before ultimately reversing field and scoring a 14-yard touchdown that gave Hawai'i a 31-13 lead with 14:11 left.

Johnson used a 24-yard connection to Thomas Whitford on fourth and nine, to spark a 10-play, 85-yard touchdown drive that ended with a three-yard QB keeper for a touchdown and a two-point conversion reverse by Isaiah Garcia-Castaneda to cut Hawaii's once 18-point lead to just 31-21 with 10:20 to play.

Cordeiro and the Hawai'i offense marched deep into Aggie territory on the ensuing drive, before settling for a 41-yard field goal from Shipley with 6:52 to play that gave the visitors a 34-21 advantage.

After a turnover on downs from NM State gave possession to Hawai'i with 2:54 left, the Warriors capped a four-play, 35-yard drive with a 19-yard Dedrick Parson rushing touchdown. The score gave the visitors a 41-21 advantage with 1:52 to play.

Parson finished with 90 yards on 11 carries and the touchdown score. The running back recorded 82 of his yards in the fourth period.

COACH SPEAK (HC DOUG MARTIN):
"I told our team after the game that nobody could question their heart or effort tonight because again they played extremely hard. I'm blessed and thankful to have a great group of players to work with. We're just shooting ourselves in the foot too much. We missed some opportunities to score offensively, and then defensively, we missed tackles and gave up too many big plays. Tonight, was another example of us beating ourselves. I give Hawai'i all the credit, but I don't believe they're a more talented team than we are. We just didn't take advantage of our opportunities well enough tonight. Our guys are still battling.  We'll reload and play next week."

On the turning point(s) in tonight's game:
"The three biggest plays were when we needed to settle for a field goal after missing a wide-open receiver. The second play was when we missed a short field goal. And the third play was the defensive touchdown that Hawai'i was given. That was a horrible call. I don't care what anyone says, it was a horrible call. They said they didn't have a camera angle to overrule it, but I felt there was no way that they should have called it a lateral in the first place. We were throwing a pass to a running back. It wasn't a lateral, but those things happen. And you need to overcome them. Like I said before, we needed to take advantage of the opportunities we were given better than we did tonight. If we would have scored seven on that drive where we made a field goal, things would have looked different."

On QB Jonah Johnson's performance:
"The way that Jonah ran the ball tonight really extended some drives because we did not pass protect well enough to help him. He made plays and had we needed to put an inexperienced QB against that defense, it would have been a disaster. Jonah's experience, ability to run, and how he can check us into the right pass protections were big tonight. I thought he played very well. The turnovers were his big nemesis tonight. If you're going to get sacked you can't fumble it. He'll get better. We really did not push the ball deep down the field as much tonight because Hawai'i plays a lot of two-deep safeties which they did most of the night. When teams do that, it doesn't give you the opportunity to throw the ball deep down the field. He threw some nice outside comebacks tonight. And then the weather in the third quarter made a big difference. That really limited our ability to throw the ball deep down the field."

WR Jared Wyatt:
"It's more just an execution thing. You know, a lot of the games that we've played, we're really explosive in the first half. And you know, we're going into halftime on a high wave and then just when that second half starts, we just kind of get complacent. We shoot ourselves in the foot a lot of times in the second half. That's just something that we just got to continue to work on each and every day in practice. And it'll translate into the game but I mean, it's nothing that they're doing it's more of what we're doing. Offensively, we're just doing things that we're just not used to doing."

On his 53-yard reception:
"It was just a little slant. We caught them in the perfect coverage and Coach Martin dialed up the perfect play and it came down to execution. It was a big play and we love it. But we just want to win."

UP NEXT:
The Aggies open the longest road swing of the season (three games) next Saturday at San Jose State. Kick-off from the Bay Area is set for 8:30 p.m. Mountain time. Fans can watch the game on NBC California.