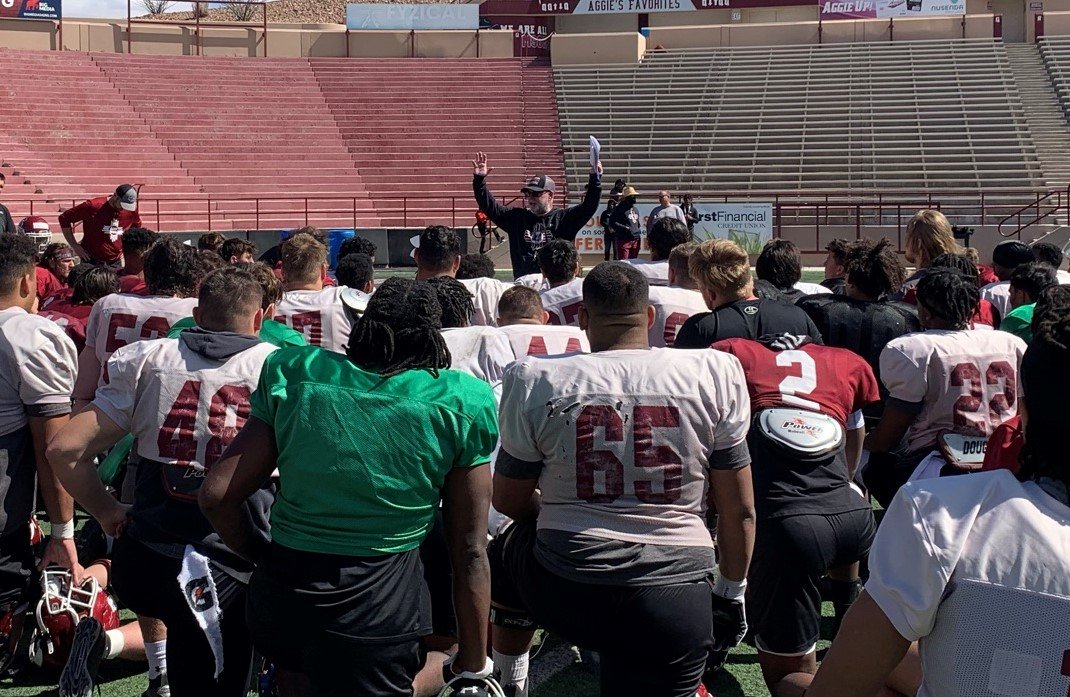 New Mexico State University football coach Jerry Kill is on a 24/7 mission to sell his program and get players, fans and the wider community pumped up about it.

Spring football practice kicked off March 15 with a little different atmosphere under the direction of the Aggies’ new coach – with music blaring from the sound system at Aggie Memorial Stadium and the public invited to attend practice.

“I tell them as long as you have insurance, I don’t care where you stand on the field,” Kill joked.

Kill was hired last November after a 2-10 season. New Mexico State has a reputation for being one of the hardest places to win in college football.

But that doesn’t deter Kill or keep him from being optimistic. He is well-known for turning around programs, most notably at Minnesota in the Big Ten.

“I am fortunate to have turned about five programs around,” Kill said. “They are all different, too. This one, we are focusing on fundamentals and technique.”

Kill said the players he has on the roster have been receptive and energetic. And he’s thrilled with their attitude.

“The kids have been tremendously responsive,” Kill said. “I think they have bought into what we do. I don’t think they have ever worked like this and this fast (paced).”

While conceding the program needs to attract more talent in the future, Kill is liking what he is seeing so far.

Getting the fans and community to buy into the program is also crucial, Kill said.

“We are putting a whole new system in,” Beck said. “They are also learning the tempo of what we want at practice. They are learning and adapting to that. It is definitely a learning experience for everybody.”

The spring game is scheduled for 7 p.m. April 14. There is no admission cost to attend practices or the spring game.