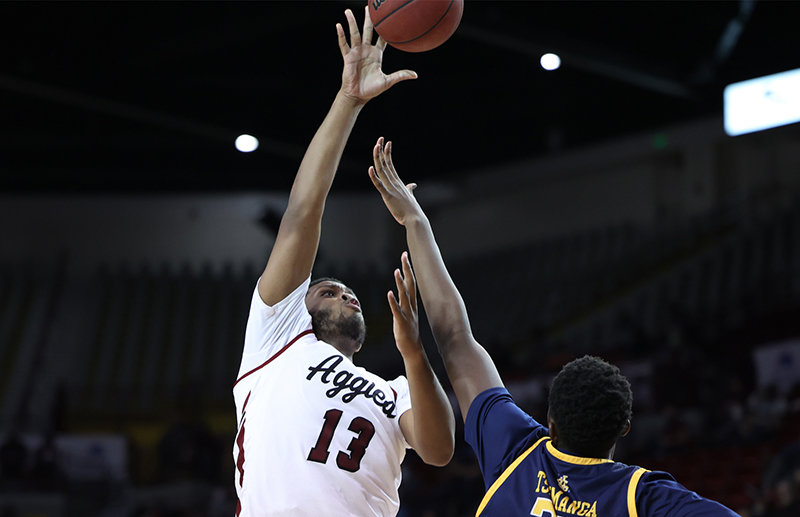 Nineteen months ago, the NM State men's basketball team exited the Pan American Center to the roar of a crowd that knew the Aggies were going to make some noise in the NCAA Tournament.

That same roar - one NM State yearned for after turning into one of college basketball's vagabonds through a 2020-21 campaign rife with frustration, traveling and no true home - was one the Aggies heard time and time against in their triumphant return to their home court.

Making use of an 11-3 run over the course of the final 5:08, the NM State men's basketball team made its long-awaited return to the Pan American Center a memorable one by taking down UC Irvine 62-51 Tuesday night.

One of just two NCAA Division I men's basketball teams who were prevented from playing any home games in 2020-21 due to in-state COVID-19 restrictions, NM State took part in its first home engagement since Thursday, March 5, 2020.

FIRST HALF
• DJ Davis managed to hand the visitors an early lead by netting the game's opening bucket, but NM State pumped in the next five points and never trailed again. Going to work early, Will McNair Jr., fired in an equalizing bucket 1:38 into things before Sir'Jabari Rice followed with a three-point play to give the hosts their first lead of the night.
• After the Anteaters knotted matters at five with one of their four long balls, Johnny McCants gave his hometown something to clamor about by punctuating a 4-0 NM State run with a powerful rim-rocking dunk with 15:24 to go in the frame.
• NM State's lead continued to grow after McNair Jr., ventured out beyond the arc and connected on a wide-open three-pointer off of a dish from McCants.
• Frustrating the Anteaters from the jump, NM State made sure they were on pace for just 44 points through the game's first 10 minutes. Using their defense to fuel their offense, the Aggies hiked their lead to double-digits on two occasions through the opening frame. The last of those times came when Teddy Allen connected on a tough floater in the lane which made matters 25-15 with 4:40 to go in the half.
• Allen hit again, this time on a layup with 2:06 left in the half, in order to keep the Aggies' lead at nine, 29-20. NM State, though, was held to just a single point for the remainder of the frame while the Anteaters netted five to close to within 30-25 at the break.

SECOND HALF
• Five of the Aggies' six second-half triples came in the first 7:46 of the deciding frame. Making his presence known, Donnie Tillman dropped in a pair of them while Allen, Mario McKinney Jr., and Rice all did the same to push their team's edge back to nine, 47-38, with 12:14 left.
• The tough-minded UC Irvine squad never backed down, though, and dropped into a zone defense to try and claw their way back into things. Following Allen's three-pointer right in front of the Aggies' bench with 12:13 to go, NM State was limited to just a single field goal make over a span of 7:06.
• With NM State going cold from the field, UC Irvine whittled the Aggies' lead all the way down to three after Justin Hohn scored four-straight points to bring the Anteaters within 51-48 with 6:20 left.
• Needing a spark in the worst way, the Aggies got one in the form of McKinney Jr., who accounted for the Aggies' next two buckets. The St. Louis, Mo., product conjured up a pair of tough finishes in traffic through a span of 3:34 to push NM State's lead back to six, 55-49.
• Allen took it from there, draining another floater in the lane before icing the game with a cold-blooded corner three-pointer off of an assist from McKinney with 1:32 to go. That triple - the Aggies' sixth and final of the half - made it a 60-51 edge for the hosts.

KEY PERFORMERS/STATISTICS OF NOTE
• After being denied a chance to play a game inside the Pan American Center in 615 days, the end result for NM State was much like many others inside the team's venerable home: a win. NM State moved to 44-3 in the Chris Jans coaching era inside the Pan American Center.
• Jans' record in season-opening games as the Aggies' bench boss was hiked to 5-0 with Tuesday night's hard-fought victory, too. Additionally, NM State's head coach moved to 2-0 all-time against UC Irvine and 3-5 in non-conference action against teams from California.
• A five-man scoring effort helped the Aggies get the job done Tuesday night as a quintet of players finished with 10 or more points. Allen led the way in that five-man brigade by registering a game-high 14 points on 6-of-18 shooting. Rice and McKinney Kr., posted 12 points apiece while McNair and Tillman added 10 each.
• Holding Collin Welp in check was of utmost importance for the Aggies and an inspired defensive effort helped them do just that. UC Irvine's star did score 13 points, but it took 14 shot for him to do so as NM State defenders were draped all over him all night.
• Dawson Baker joined Welp in double-digits, scoring 11, but also didn't experience a great deal of success from the field. He drilled just four of his 14 field goal tries on the night.
• The three-point line wasn't necessarily a friend to anyone as the Anteaters hit just 19-percent (4-of-21) of their tries from that distance. NM State connected on seven of its 23 attempts (30.4-percent), but made the most of its free throw opportunities by converting 15 of its 16 (93.8-percent).
• NM State finished with a slim 36-35 edge in rebounding thanks to eight apiece by McCants and McNair. UC Irvine, though, possessed a 12-6 advantage on the offensive glass.

COMING UP NEXT
• Fresh off a hard-fought victory against one of the premier teams in the Big West, things don't get any easier for the Aggies Saturday night. The Battle of I-10 reignites inside the Pan American Center when longtime Texas rival UTEP pays a visit to the Aggies' home. The first meeting between the two clubs since Dec. 3, 2019, is set for 7:00 p.m.