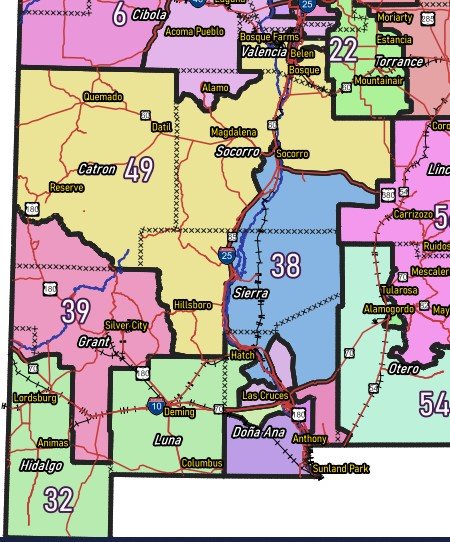 As a result of the last year’s redistricting of all New Mexico legislative seats, Doña Ana County is now part of nine New Mexico House of Representatives districts. Candidates for all 70 House seats will represent newly drawn districts when the Legislature convenes next January.

The only House seat that has contested races in the June 7 Democratic and Republican primaries is in District 38, which includes portions of southeast Socorro County, the eastern half of Sierra County and northeast Doña Ana County. Each primary has two candidates. There are no Libertarians in the race.  Incumbent Rep. Rebecca Dow, a Republican from Truth or Consequences, gave up the seat to run for governor.

The Democratic candidates are Ravi Bhasker, who has been mayor of Socorro since 1990 and ran for state representative in 2004, and Tara Jaramillo, a Socorro speech language pathologist and member of the Socorro Consolidated School District Board of Education. Republicans are Socorro High School teacher Melba T. Aguilar of Socorro and Sandra Kay Hammack, a San Antonio farmer and rancher, beekeeper, store manager and member of the Socorro County Fair Board.

Here are the other Doña Ana County state House seats, none of which have contested primaries:

District 32 (which includes all of Luna and Hidalgo counties and a portion of north-central Doña Ana County): Incumbent Democrat Candie Sweetser vs. Republican Jenifer Marie Jones, both of Deming.

District 34 (entirely in Doña Ana County): Incumbent Democrat Ray Lara of Chamberino is unopposed in the primary and the general.

District 52 (entirely in Doña Ana County): Incumbent Democrat Doreen Gallegos vs. Republican John Foreman, both of Las Cruces. The general election will be a rematch of the 2020 race.

The 42 seats in the New Mexico State Senate also were redrawn during redistricting. None of those seats is on the 2022 ballot. They will all be up in 2024.