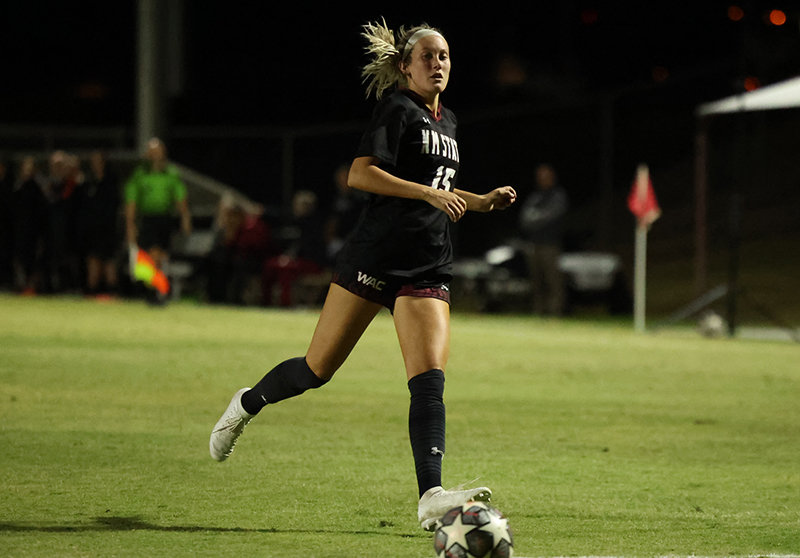 Hoping to string together back-to-back WAC victories for the first time the early stages of the month, the NM State women's soccer team instead found it difficult to get anything past a stout Utah Valley defense and dropped a 2-0 decision to the Wolverines Thursday night at the NM State Soccer Athletics Complex.

SCORING SUMMARY
19' | Hoping to gain some separation between it and Grand Canyon at the top of the WAC's West Division standings, Utah Valley struck first. Stationed near the corner, Julianna Carter sent a long ball to the mouth of the Aggies' net which was played from there by Amber Tripp. Tripp's touch pass found Nicole Ray who beat Makenna Gottschalk with a short shot to give the visitors a 1-0 lead.
47' | A bouncing ball near the front of the Aggies' net was scooped up by Heather Stainbrook who tapped it in from just a few yards out to double the Wolverines' lead. Gottschalk got caught up in a scrum on the opposite side of the net and was unable to recover in time as Stainbrook's score made matters 2-0.

KEY PERFORMERS/STATISTICS OF NOTE
• Once the Wolverines put their first goal in the board early in the opening frame, they maintained possession throughout the vast majority of the remainder of the tilt. NM State got just two shots off in the opening 45 minutes of play with just one of them testing Utah Valley netminder Brooklyn Nielsen.
• Through the final frame, NM State managed to put two more shots on frame, albeit from long range. Brooke Schultz tested Nielsen with a long shot that the Wolverines' goalkeeper had to leap for to save. Landy Williams submitted the Aggies' final shot of the night by booting a ball at Nielsen in the 77th minute.
• NM State was outshot by a 15-5 margin which included a 7-3 disadvantage in shots on goal.
• Gottschalk finished her night with five saves while Nielsen tallied three in Utah Valley's fourth-straight victory.
• NM State dropped to 0-10-3 all-time against Utah Valley with Thursday night's result.

COMING UP NEXT
• For their final regular-season match of the year, the Aggies welcome another foe from the state of Utah to the NM State Soccer Athletics Complex. NM State will tangle with Dixie State Saturday night at 7:00 p.m. in a match which signals the final home fixture for a group of 11 NM State seniors. The Aggies' senior class will be recognized for its contributions to the program in a brief pre-match ceremony.