Aggies shut out for third time in 2021 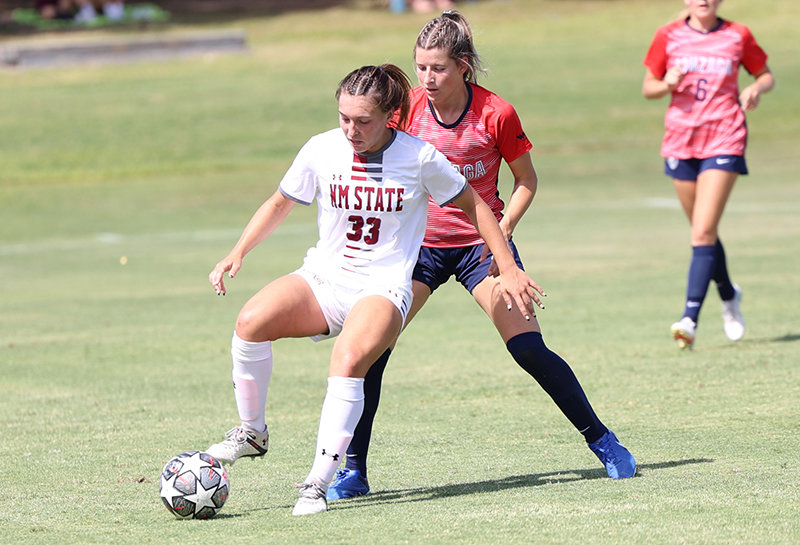 Facing off against an opponent from the West Coast Conference for the first time since 2018, the NM State women's soccer team could not keep pace with the high-powered offense of Gonzaga and dropped a 4-0 decision to the Bulldogs Sunday afternoon at the NM State Soccer Athletics Complex.

SCORING SUMMARY
1' | Just 34 seconds into the game, Gonzaga struck for the game-winning goal. Erin Healy sent a shot past NM State netminder Makenna Gottschalk to give the visitors a lead they never relinquished.
36' | Maddie Kemp doubled the visitors' edge late in the opening frame, taking a feed from Kate Doyla and sending it past Gottschalk.
50' | Early in the second half, Haley Archuleta settled down a bouncing ball at the mouth of the Aggies' goal and tapped it past Gottschalk. That score pushed the Aggies' deficit to 3-0.
69' | Healy closed the books on the scoring with her second strike of the game. Gonzaga's swift forward made an attacking run down the far line and launched a strike to the bottom left portion of the net and past NM State's Mia Montano.

KEY PERFORMER/STATISTICS OF NOTE
• NM State suffered its third shutout loss of the season as well its fourth consecutive setback. The Aggies dropped below the .500 mark for the first time this season.
• Shea O'Connor and Corey Kizer each had solid looks on target through the Aggies' non-conference finale. O'Connor's chance came in the 21st minute and her quality try to the bottom left corner was scooped up by a diving Lyza Bosselmann.
• Kizer's second-half shot tried to sneak to the bottom-right corner of the net in the 62nd minute, but Bosselmann made her second and final save of the afternoon to help preserve Gonzaga's shutout win.
• Gottschalk gave way to Montano for the game's last 22:21. Through that final stretch, Montano surrendered Gonzaga's final goal and did not record a save.
• In 67:39 between the pipes, Gottschalk amassed seven saves - her second-highest single-game total as an Aggie.
• Gonzaga secured its seventh win in a row and its third consecutive shutout triumph. Bosselmann made a pair of fine saves to keep another clean sheet effort intact before Lauren Towne stepped in for the final 25:55 and made her team's final save of the afternoon.
• NM State dropped to 0-4 (.000) all-time against WCC foes. That mark includes an 0-2 record in Las Cruces.

COMING UP NEXT
• With their non-conference schedule in the books, the Aggies turn their attention to WAC action. NM State's first league showdown of the 2021 campaign is set for Thursday night in St. George, Utah, against Dixie State. Kickoff is set for 7:00 p.m. and the match is set to be streamed on the WAC Digital Network.