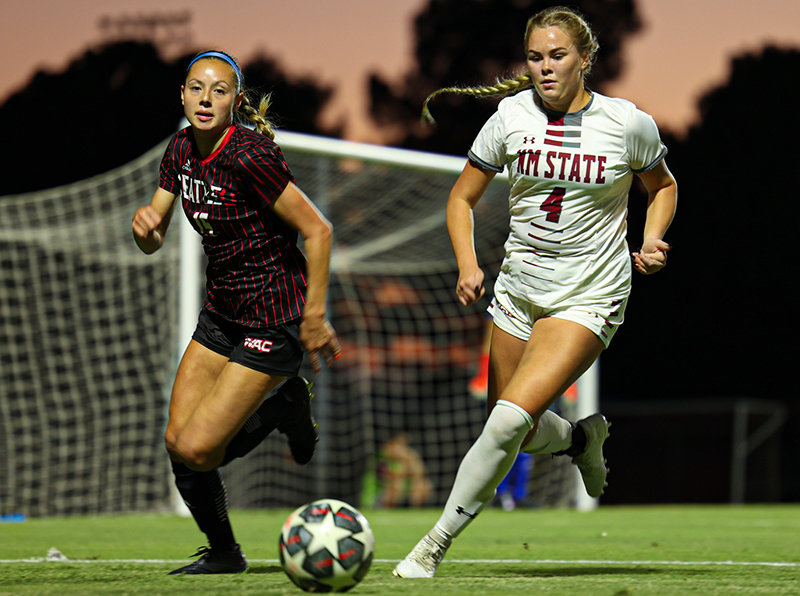 THE KICKOFF
• Saturday night in Phoenix, the top two teams in the WAC's West Division are set to wage war when NM State sets foot in GCU Stadium to challenge division-leading Grand Canyon.
• Kickoff in the 11th all-time meeting between the two programs is set for 8:00 p.m. MT with ESPN+ and the ESPN app set to carry each and every second of the action.

THE SERIES
• Since the Aggies and Lopes began meeting on the pitch in 2013, NM State owns a 3-7 (.300) mark against their foes from Phoenix.
• Seven of the 10 meetings have been decided by a single goal while two have gone into overtime sessions.
• Owners of a 1-4 mark against the Lopes in Phoenix, NM State captured its first road victory over Grand Canyon on March 6, 2021 by a score of 2-1.
• Grand Canyon has outscored NM State 19-9 in the 10 all-time meetings between the two programs. In the five matches played at the Lopes home venue, NM State has been outscored 11-3.
• Now in his fourth season as the Aggies' head coach, Rob Baarts is the owner of a 1-3 (.250) record against Grand Canyon.

LAST TIME OUT | California Baptist 0, at NM State 1 | Sunday, Oct. 3, 2021
• After waging a scoreless battle through 87 minutes, NM State sophomore midfielder Loma McNeese played the role of hero by pushing in the game-winning goal in the 88th minute to lift the Aggies to a 1-0 victory.
• McNeese's goal allowed the Aggies to capture their first win over the Lancers in the history of the program.
• The win marked the Aggies' second-straight WAC victory, giving the team back-to-back league victories for the first time since Feb. 20-22, 2021.
• NM State improved to 5-2 in one-goal games this season.

ABOUT THE AGGIES
• By winning three of their first four WAC matches of the season, NM State is off to its best start in league action since 2009. That year, NM State 4-0-1 over the course of its first five WAC tilts.
• NM State is one win away from matching the program record for WAC wins in a single season (four). The 2009, 2015 and spring 2021 editions of the Aggies are tied for the program record in that category.
• The Aggies' seven wins this season are the most in a single season in the tenure of fourth-year head coach Rob Baarts as well as the fourth-most in a single season in program history. NM State's 2011 club set the program record for wins in a season with 11 while the Aggies' 2009 and 2017 squads each won nine matches.
• Baarts has succeeded in increasing the Aggies' win total every single season during his tenure. After winning just two matches in 2018, the Aggies won four in 2019 and five in the 2021 spring season.
• Fifteen NM State players have points to their credit this season. Only Grand Canyon (19 players) has more student-athletes who have either scored goals or registered assists in 2021.
• Sophomore Bella Garcia assisted on McNeese's game-winning goal and scored the Aggies' game-winning goal in their 2-1 win over Seattle U last Friday night. Both of Garcia's goals this season have been game-winners in WAC contests and she has moved up to third on the Aggies' charts in total points (five) this year. Her two game-winning goals are the second-most by all WAC players this season.
• After going 2-0 in net last week, senior goalkeeper Makenna Gottschalk was named the WAC Defensive Player of the Week Monday morning. It was Gottschalk's second WAC Defensive Player of the Week award of her career.
• Gottschalk moved to 7-6 in the year with her two wins. Sunday, the Broomfield, Colo., product made four of saves in the Aggies' victory, hiking her season total up to 51. For her career, Gottschalk has stopped 110 shots in an Aggie uniform – the sixth-most all-time. With five more saves, she'll move up to fifth on the program's all-time saves list.
• Gottschalk's save total this season is the seventh-highest among all WAC netminders and her three clean sheets are the third-most when stacked up against that same group.
• Various NM State players have been stepping up in a big way this season. NM State has not had the benefit of a fully healthy roster since early September due to multiple injuries.
• Hannah Leitner is the program's all-time leader in assists with 12 throughout her career in the Crimson and White. Additionally, Leitner ranks eighth all-time on the NM State goal scoring charts with 10 in her career.
• Three other Aggies have been making their way up the program's all-time goal scoring charts since the season began, too. O'Connor has booted in 11 during her NM State career. Those 11 goals are the seventh-most all-time.
• Like Leitner, Corey Kizer is tied for eighth all-time in career goals scored with 10. On the year Kizer has accounted for two of the Aggies' 13 scores.

SCOUTING GRAND CANYON | ROSTER | SCHEDULE | STATISTICS
• Riding a five-match unbeaten streak into the final leg of its three-match homestand, the Lopes sit atop the WAC's West Division standings and are in the midst of their best season in over a decade.
• With a double-digit win total for the first time since 2010, GCU has outscored its opponents by a 16-3 margin through its last five matches. The Lopes are 4-0-1 through that span and in WAC action the squad owns a 3-0-1 mark while outscoring its league foes 12-2.
• After going 4-7-1 on their home turf last season, the Lopes have gone an impressive 6-1 there in the fall. The Lopes' lone home setback came at the hands of New Mexico by a 2-0 score back on Saturday, Sept. 11.
• Grand Canyon tops the WAC charts in 10 statistical categories including assists per game (2.23), goals against average (0.745), scoring offense (2.69 goals/game), shots per game (17.38) and shots on goal per game (8.15).
• Possessing scoring threats up and down the lineup, Grand Canyon is led by the likes of senior Marleen Schimmer, junior Gianna Gourley and junior Lindsey Prokop. Between the three of them, 20 of the squad's 35 goals are represented with Schimmer leading the way with eight. Gourley and Prokop have registered six apiece.
• Thanks to the Lopes' stingy back line, goalkeeper Jordan Ferguson has faced just 2.85 shots on goal per game. As a result, Ferguson owns a 10-2-1 record between the pipes and has a WAC-best five shutouts to her credit. Her goals against average of 0.64 is tops among all WAC goalkeepers and the 41st-best figure in the nation, too.

COMING UP NEXT
• Once they finish up their showdown with Grand Canyon Saturday night, the Aggies will begin their second run through the WAC's West Division. The second of three consecutive road games for NM State sends the team to Irvine, Calif., for a second showdown with California Baptist at 2:00 p.m. Friday afternoon.