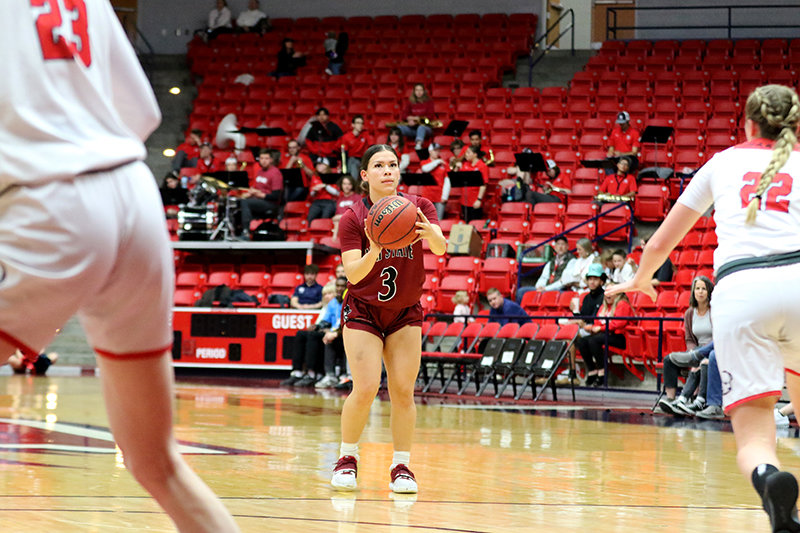 The Aggies will look to put a halt to their losing streak when they host Grand Canyon on Saturday afternoon in the second of two meetings between the two programs this season.
NM State Athletics photo
Posted Friday, February 18, 2022 12:01 pm
NM State Athletics Release

Opening Tip• The Aggies will look to put a halt to their losing streak when they host Grand Canyon on Saturday afternoon in the second of two meetings between the two programs this season.• In the meeting in Phoenix, NM State came within a couple of bounces of beating the now second-place Lopes as they fell to a last-second shot from Amara Graham to drop the road game, 61-59, back on January 29.• Including the loss in GCU Arena, the Aggies still own the series as they are 11-6 all-time versus the Lopes, including going 8-1 in home tilts.• Saturday's matchup will mark the first time that Grand Canyon has to make the trip to Las Cruces since Feb. 27, 2020, with the last three meetings being in Phoenix.• Prior to tip-off on Thursday, the Aggies find themselves in 10th place in the WAC standings but would be slotted in ninth in the WAC Tournament due to Tarleton being ineligible to participate in Las Vegas. The Lopes are immediately coming off a 20-point win over last year's WAC Champions in California Baptist. The win leapfrogged the Lopes into second place in the conference.• This will be the 72nd WAC contest in which Brooke Atkinson will be at the helm as the Aggies have compiled a league record of 45-27 during her tenure, including two regular-season WAC titles. The Nitty Gritty• Head Coach Brooke Atkinson leads one of the WAC's top rebounding teams as the Aggies rank first in the conference in rebounding margin, out-rebounding opponents by 5.5 boards per game.• The Aggies also rank first in rebounding margin in league contests as, on average, they collect 6.7 more rebounds than their opponents in WAC games. In WAC play, the Aggies are also tops in offensive rebounds per game (15.1) and total rebounds per game (39.1).• The Aggies also rank in the top five among WAC teams in free throw percentage (3rd, .698), free throws made per game (4th, 11.6) and turnovers forced per game (5th, 16.83).• NM State is led in scoring by graduate transfer Bigue Sarr who ranks 11th in the WAC in points per game (13.4) and second in rebounds per game (8.8). Sarr also posts a field goal percentage of 53.3 percent to rank fifth in the league. Sarr's ability to create second-chance opportunities for the Aggies is also among the league's best as she ranks second in the WAC in offensive rebounds per game, pulling down 3.4 per contest.• In Thursday's loss, Bigue Sarr collected her 10th double-double to become just the third NM State player in the last 10 years to achieve that feat in one season. The other two are Gia Pack (12, 2019-20) and Brooke Salas (21, 2018-19) Scouting the Lopes• Grand Canyon will be entering Saturday's contest riding a two-game win streak after knocking off California Baptist, 75-55, on Thursday evening.• This win also allowed the Lopes to complete the season series sweep of California Baptist, accounting for exactly half of the Lancers' WAC losses this season.• The Lopes are led offensively by UT Rio Grande Valley transfer Amara Graham who averages 12.4 points per game. Dominique Phillips has also been effective for head coach Molly Miller as Phillips averages 10.1 points on 44.6 percent shooting from the field.• Post player Jay McChristine was the Aggies' biggest problem in the first meeting as McChristine finished with 19 points on 9-of-13 from the field.• Although, the Lopes hang their hats on the defensive end where they are limiting WAC teams to just 56.7 points per game while coming up with 12.7 steals per outing.• Head Coach Miller is in her second year with the Lopes and has generated a record of 35-14 to this point in her career at the helm in Phoenix. Last Time Out | NM State 69, Dixie State 72 | Thursday, Feb. 17, 2022• The Aggies suffered defeat in their eighth game decided by four or fewer points this season as Emily Isaacson connected on two three-pointers in the final minute of play to lift the Trailblazers past the Aggies.• The Aggies were led in scoring by Bigue Sarr who recorded her 10th double-double of the season, totaling 16 points and 10 rebounds.• Molly Kaiser and Fama Thiam also pushed their way into double-digits as Kaiser finished with 13 points and Thiam posted 12 points in just 15 minutes of action.• Similar to how they have done all season, the Aggies dominated the glass once again – outrebounding Dixie State by a total of 38-28.• The Aggies pulled off one of the rarest feats in college basketball as they collected more offensive rebounds (21) than they did defensive rebounds (17).• The Aggie bench was also another strength tonight as it scored 31 points compared to Dixie State's nine that came away from its starting lineup.• Dixie State was led by Emily Isaacson who finished with 25 points and went 7-of-10 from three-point land, including knocking down the game-winner with under three seconds remaining in the contest.• Breaunna Gillen scored 20 points while Shanaijah Davison recorded a double-double with 16 points and 10 rebounds. Up Next• The Aggies will finally get some real rest as they are off for a week until they host Chicago State on Saturday, Feb. 26.• Next Saturday, the Aggies will look to even the season series with the Cougars after falling in Chicago. Tip-off is set for noon. Sights on SixNM State will seek its sixth WAC regular-season title since the 2014-15 season. Including this season, the Aggies are 85-23 in conference play across the past seven seasons. Preseason PicksNM State was picked to finish in seventh place in the WAC Coaches' Poll while the media selected the Aggies to land in sixth this season. The WAC media also selected junior guard Soufia Inoussa to the Second Team All-WAC list.