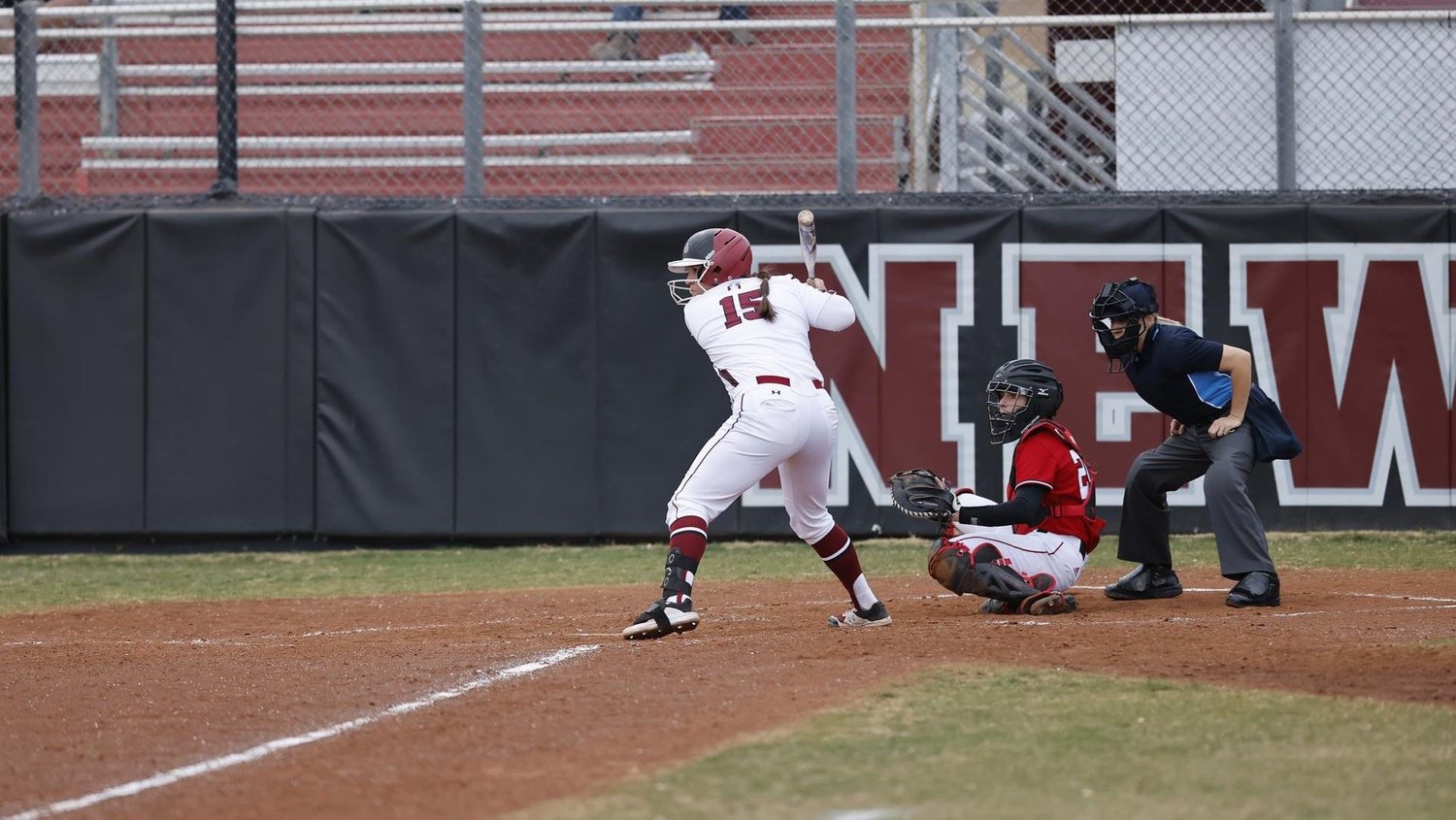 RIVERSIDE, Calif. – The Aggies were unable to find consistency on Friday night as they dropped a pair on the road to California Baptist.

In the opener, the Aggies made a late push and nearly came all the way back after trailing by five runs - eventually falling 7-6. Then, in the second half of the doubleheader, NM State stayed within striking distance for four and a half innings before the Lancers were able to post six runs in the fifth and earn a 9-1 decision and their first set of back-to-back wins over the Aggies since joining the Western Athletic Conference in 2019.

Friday, the Aggies were led by Tucson, Ariz., native Riley Carley who finished the day 4-for-5 at the plate and tallied three RBIs across the two contests. Carley also made her debut in the circle for Kathy Rodolph’s squad as she pitched 1.1 innings and made appearances in both games.

Jordin King earned the start in game one for NM State and she was able to notch 4.1 innings and allow three earned runs.

The aforementioned Carley went 3-for-3 in the first game and posted a pair of RBIs. Hailey Tanori was also effective from the seven spot in the lineup as she went 2-for-4 and recorded two RBIs to bring her season total to three.

NM State picked up its first run in its first at-bat as Ramsay Lopez sent the fourth pitch of the game over the centerfield wall – notching her ninth home run on the season. Two of the next four Aggies, Kayla Bowen and Paige Knight, then hit singles to reach base and set up the dangerous Riley Carley. Carley took advantage of the situation and singled through the right side to bring home Kayla Bowen from third base.

California Baptist’s Sydney Soto reached on a walk to put the leadoff hitter aboard in the bottom half of the inning. Soto then stole second before Priscilla Estrada singled into left field to bring Soto home and score the first CBU run of the day. Estrada eventually worked her way over to third and then scored after Karmyna Becerra hit a sacrifice fly into deep center field – evening the score at two runs apiece.

After the Aggies failed to put anyone on base in the top of the second, California Baptist had the bases loaded with two outs until Katelyn Mangrello doubled into right-center to score three and give the Lancers a three-score advantage. The Lancers would score two more later in the inning to post five total in the second and give CBU a 7-2 lead.

The two sides then combined for just six hits across the next three innings – leaving the score at 7-2 entering the sixth.

NM State’s offense started to find some success in the sixth inning as Paige Knight singled up the middle, Riley Carley walked and Hailey Tanori singled to third to load the bases for the Aggies. Two batters later, Jayleen Burton hit a blooper to center field to bring across pinch-runner Madison Muxen and score the first Aggie run since the first inning.

However, a strikeout would eventually end the top half of the sixth inning and leave a trio of Aggies stranded on base.

Jordin King was then able to retire the side using just 15 pitches to keep the Aggies to within four runs entering the final inning.

The Aggies showed serious signs of life in the top of the seventh as Jillian Taylor recorded her second hit of the day to lead off the inning. Two batters later, Maya Martinez singled to second base – allowing Taylor to move into scoring position.

Riley Carley eventually came up to bat with the Aggies down to their final out and she was able to prolong the game with a single to left field which moved pinch runner Xopia Venegas from first to third and brought home Taylor from second. Hailey Tanori then came up with the Aggies’ 13th hit of the game to bring home Venegas and put the Aggies to within just one run of the Lancers.

However, the Aggies’ magic ran out as CBU ended the game in the next at-bat – getting Melika Ofoia to fly out to second base. Despite out-hitting CBU 13-12, the Lancers earned their fourth all-time win over the Aggies in eight meetings.

At the plate, leadoff hitter Ramsay Lopez was the Aggies’ most efficient hitter as she tallied two hits in three at-bats. However, Carley was the only Aggie to drive in a run.

Contrary to how the first game went, neither side was able to post any runs in the first inning of the second game. In fact, each team recorded only one hit in the opening inning while combining for three runners left on base.

After the Aggies went three-up-three-down in the top of the second inning, California Baptist’s Maile Olsen hit a leadoff single to give the Lancers their second base runner of the day. Olsen would eventually represent the game’s first run as Mackenzie San Pedro put a ball into right field that brought in Olsen from second base.

Although, the Aggies’ nine, one and three hitters did respond as Jayleen Burton, Ramsay Lopez and Riley Carley each singled up the middle. Carley’s hit also resulted in the Aggies’ first run of the game when Burton came around from second to score and tie the game at one run.

Laurali Patane then gave up just one hit in the bottom of the third inning to maintain the tie in her home state entering the fourth inning.

The Aggie lineup was unable to score in the top half of the fourth while the CBU lineup started to figure out Patane in the home half. Olsen collected her second hit of the game to lead things off before a San Pedro double gave Olsen enough time to score from second base.

CBU head coach Mike Smith then chose to make some changes as he brought in Nicole Stark to pinch hit and sent Michaila Harrington into the game to pinch run. Stark delivered at the plate when she hit a single down the right-field line, allowing the speedy Harrington to score from second base. This would give the host Lancers a two-run advantage entering the fifth inning.

In the top half of the fifth, the first two Aggie batters showed toughness as Jillian Taylor earned a single after a seven-pitch at-bat to extend her hit streak to 13 games while Riley Carley forced Castaneda to throw 10 pitches before she flew out to right field.

Taylor’s hit would ultimately be the last hit of the game for the Aggies, as California Baptist was able to score six in the bottom half of the fifth inning to put the game away via run rule.

UP NEXT
The Aggies will return to John C. Funk Stadium in Riverside, Calif., Saturday  to complete their three-game road stand. First pitch for Saturdays’s bout is scheduled for 6 p.m. MT.