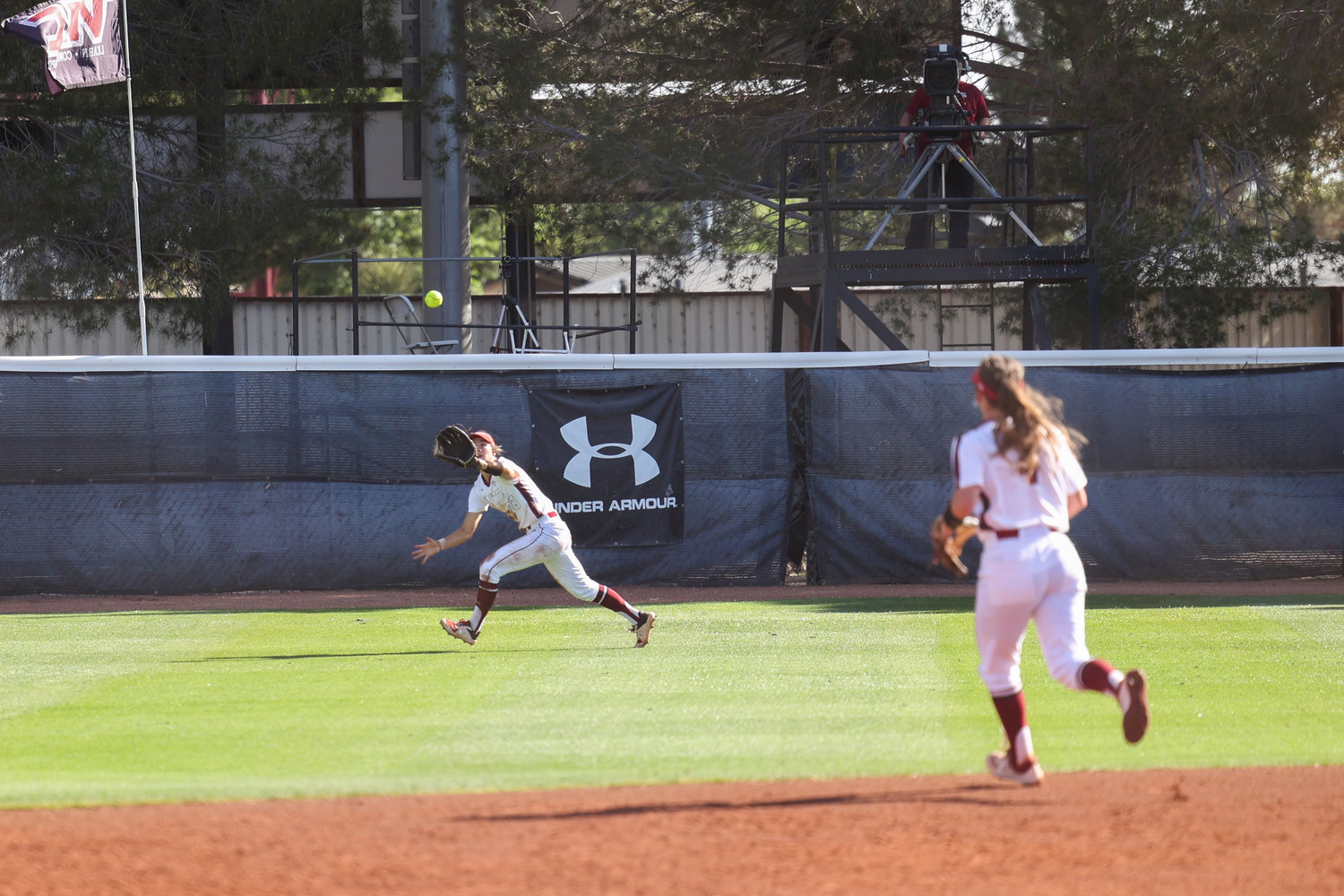 GAME ONE
The first inning was a matter of ups and downs for the defending Aggies as the leadoff hitter, Estrada, managed an infield single before advancing to second base on a wild pitch during the next at-bat. However, Estrada would eventually be thrown out trying for third as the ball quickly traded gloves between Knight at shortstop, Bowen at first then finally Lopez at third for the out. Despite threatening, CBU was unable to score in the top half of the first inning.

King was effective in the second inning as well, giving up just one hit while also picking up her 64th strikeout of the season as she put away Mackenzie San Pedro after a six-pitch at-bat.

The bottom half of the second inning would be the start of a scoring flurry as the two sides combined to score at least one run in the next six consecutive half innings, totaling 18 runs. Hannah Lindsay and Maya Martinez each singled to start their stellar outings at the plate and put two runners aboard with just one away.

A Riley Carley walk would eventually load the bases and set up a great opportunity for Aggie number one hitter Hailey Tanori. Tanori, who entered the day with five RBIs, added three more to her season total when she hit a triple off the wall in right center. With the Aggies' run total at three and Tanori sitting at third, an error by the CBU first baseman on a ball put in play by Jillian Taylor pushed the NM State lead to four runs in the second inning.

California Baptist answered with four runs of their own as they scored on a pair of doubles and a pair of singles. The hometown Aggies regained the lead in the third inning when Martinez collected her second hit and second RBI as she doubled to left center to bring home pinch runner Savannah Bejerano. A Paige Knight single would score Gabby Aragon later in the inning before a walk earned by Jillian Taylor with the bases loaded brought in the third run of the third inning and gave the Aggies a 7-4 advantage.

The Lancers were then able to put up another four runs on the scoreboard in the fourth inning as a couple of errors and a walk loaded the bases with just one out gone. CBU's Amanda Argomaniz took a page out of Tanori's book when she doubled to score all three Lancer base runners. A double in the next at-bat brought in Argomaniz to pull the Lancers ahead by one run, leading 8-7.

NM State got a lift from senior Kayla Bowen in the bottom of the fourth as she singled after working the count full. Martinez then recorded her season-high third hit of the game, doubling to center field to bring Bowen home from second base and pull the Aggies even with CBU.

California Baptist notched a pair of additional runs in the fifth inning to go ahead 10-8 and ultimately end the combined scoring run.

NM State would eventually add one more run in the bottom of the sixth inning. Martinez continued her career day as she hit a ball deep into foul territory that would ultimately turn into a sacrifice fly as Kayla Bowen tagged up to score from third. Although, this would be the last of the Aggie damage, resulting in a tough 9-10 loss.

GAME TWO
Contrary to the high-scoring first game of the evening, the second time NM State and California Baptist clashed was a much lower scoring tilt. The first three innings went according to plan in the eyes of the pitching coaches as neither side was able to crack the scoreboard.

After working through a perfect 1.1 innings, De La Torre gave up her first hit of the game in the second but followed that up by getting the next two batters to pop up. Those two outs were the start of a seven-at-bat stretch in which De La Torre retired all seven batter.

California Baptist finally cracked the seal when Amanda Argomaniz hit a two-run shot to center field. On the other side, the Aggies were only able to manage one hit through four innings as right-hander Jordan Schuring threw a dominated all night from within the circle.

The Lancers were able to further extend their lead in the sixth inning as they scored three runs to take a 5-0 lead. This would eventually be the final score of the concluding game of the series.

In total, NM State would only notch three total hits in the second game with the final hit coming off the bat of Kayla Bowen who is one of just two seniors on this year's Aggie squad. The other senior that joined Bowen in Friday night's ceremony is catcher Melika Ofoia.

UP NEXT
The Aggies will wrap up the regular season with a series on the road at Utah Valley in Orem, Utah next weekend. Game one of the series will begin at noon on Friday, May 6, with a doubleheader on Saturday set to wrap up the season for both programs. Fans can watch the Aggies and Wolverines duke it out on WACsports.com/watch.