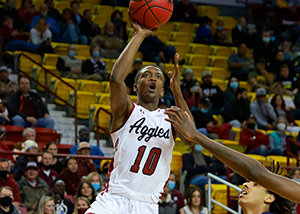 THE OPENING TIP
• Back in Las Cruces following a showdown in the state of Texas last week, the NM State men's basketball team puts its WAC-leading eight-game winning streak on the line inside the Pan American Center when it hosts Tarleton for the first time in 58 years. Tip-off between the Aggies and Texans is set for 7:00 p.m. Thursday night.
• The fourth all-time meeting between Aggies and Texans will be televised on Bally Sports Arizona and Comcast New Mexico. Additionally, ESPN+ and the ESPN app will stream the action nationwide.
• The play-by-play and analysis combo of Adam Young and former NM State player Joe Garza are set to narrate the action on all television and video streaming platforms. Over the airwaves, legendary radio play-by-play man Jack Nixon will set up shop courtside to call the action.
• Nixon's play-by-play and analysis can be heard on 99.5 Zia Country FM in Las Cruces, N.M., and nationwide on The Varsity Network app.
• Affiliate stations of the Aggie Sports Network can be tuned in to in Artesia, N.M. (990 AM), Carlsbad, N.M. (1240 AM), Gallup, N.M. (94.9 FM), Alamogordo, N.M. (103.7 FM) and El Paso, Texas (1380 AM). All of those stations will also carry Nixon's commentary of Thursday night's tilt.
• The first 1,000 fans in attendance will get their hands on a free NM State flatbill hat with the Zia logo on the brim.

MISCELLANEOUS & MILESTONES
• NM State's collective field goal percentage of .473 ranks 51st in the nation and third among all WAC teams.
• The Aggies' rebounding margin of +7.4 is the 32nd-best in the nation as well as the third-best in the WAC.
• NM State ranks 52nd nationally in terms of field goal percentage defense. The Aggies are allowing their opponents to shoot just 39.7-percent from the floor this season which is the third best among all WAC teams.
• In one of his most recent games, redshirt junior guard Jabari Rice put in 22 points in NM State's win at Washington State (Dec. 15). When Rice scores 20 or more points in a game, NM State is 9-1.
• High-scoring guard Teddy Allen leads NM State in scoring at a rate of 17.3 points per game and also ranks 19th nationally in free throw percentage (.900). The Phoenix, Ariz., product also sits among the top 60 players nationally in field goal attempts (56th, 209).
• With head coach Chris Jans leading the way, the Aggies have posted a 6-6 (.500) record against Power Five opponents. That mark includes a 6-4 (.600) showing against Power Five foes in regular-season tilts. NM State has secured wins over Illinois, Miami, Mississippi State and Washington State (three times) under Jans' direction since 2017-18.
• Jans returned to the bench on Friday, Dec. 3, 2021 for the Aggies' game at UTEP. The team's fifth-year bench boss had previously missed its last two games due to COVID-19 protocols.
• In a 101-94 home loss to New Mexico on Monday, Nov. 30, 2021, the Aggies gave up 100 or more points to the opposition for the first time in the Chris Jans coaching era. Before that game, the last time NM State let a foe hit the century mark came in 2017 when it claimed a 107-101 WAC win at UTRGV on Feb. 18. Since 2010, only three NM State opponents (Nevada, New Mexico and UTRGV) have amassed 100 or more points in a game.
• Now in his fifth season in an NM State uniform, Johnny McCants has broken into the program's top-ten leaders in blocked shots. McCants, a Las Cruces, N.M., product has 100 rejections to his credit as a collegian which are the eighth-most all-time by any Aggie. Other Aggies who rejected 100 or more shots in their respective careers include James Moore (200), Sim Bhullar (196), Hamidu Rahman (137), Pascal Siakam (137), Tshilidzi Nephawe (135), Slab Jones (124) and Charles Gosa (116).
• Three NM State players are all fast approaching the 1,000-point mark for their respective NCAA Division I careers. Johnny McCants needs 81 more points to get there while Jabari Rice is 94 points away from quadruple digits in the scoring column. Teddy Allen requires just 134 more points to reach the 1,000-point plateau in his NCAA Division I playing career.

LAST TIME OUT vs. TARLETON | NM State 55, at Tarleton 64 | Saturday, Feb. 27, 2021
• Less than a day after coming up with its best shooting performance of the season, the NM State men's basketball team couldn't replicate things and hit just 32.7-percent (17-of-52) of its shots in a 64-55 setback to Tarleton.
• The Aggies never were able to get things going on offense as Tarleton opened the game on a 16-4 run through the first 8:30 of action.
• Johnny McCants nearly posted a double-double by finishing with 11 points and a game-best eight rebounds, but he was one of only two Aggies who posted 10 or more points in the loss.
• Tarleton's lead grew to as many as 14 points by the time all was said and done.
• Following a Freddy Hicks free throw make which extended the home team's edge to 27-16 with 5:32 left in the first frame, C.J. Roberts helped the Aggies get back to within striking distance. A personal 7-0 run by the guard pulled NM State within four, 27-23, but Tarleton closed out the first frame on a 9-2 run through the final 3:19 of the half to take an 11-point lead into the locker room.
• Roberts finished with a team-high 12 points for NM State in what proved to be its final loss of the 2020-21 regular season.
• Following the setback, NM State went on a five-game winning streak and advanced all the way to the 2021 WAC Tournament championship game. The five-game unbeaten run was the Aggies' longest of the 2020-21 season.
• NM State was missing both Evan Gilyard II and Wilfried Likayi in the loss. Those two individuals were in concussion protocol for the third all-time meeting between the two programs.

LAST TIME OUT | NM State 85, at UTRGV 73 | Saturday, Jan. 8, 2022
• Balanced scoring and a ramped-up rebounding mindset helped NM State remain perfect in WAC play as the Aggies scored an 85-73 victory over UTRGV Saturday night inside the UTRGV Fieldhouse.
• Teddy Allen turned in the second double-double of his NCAA Division I basketball career by going for a team-high 19 points while matching his career-best with 11 rebounds. The Phoenix, Ariz., product added a game-high five assists to help the Aggies push their winning streak to eight games.
• In all, five players - four of whom were starters - posted 10 or more points in NM State's nation-leading seventh-straight true road victory. Will McNair Jr., finished the game one shy of matching his career-high by going for 17 points on an 8-of-11 effort from the field.
• Johnny McCants and Jabari Rice each pulled down seven rebounds while posting 13 and 14 points respectively.
• Off the bench, Mike Peake enjoyed his first double-digit scoring outing in an Aggie uniform. The Chicago, Ill., product finished with 10 points on an efficient 4-of-5 shooting performance which complimented his two blocked shots. Peake's 10-point performance was his first double-digit scoring outing since he put in 13 against Eastern Kentucky back on March 4, 2021, while he was still sporting an Austin Peay uniform.
• Peake's 10-point outing came at the expense of his former head coach, Matt Figger, who is in his first season as UTRGV's bench boss.
• The victory extended the Aggies' streak of wins over the Vaqueros to 21 games. That's NM State's longest active winning streak against any current WAC institution.
• NM State did exceptionally well on the glass, springing for 49 rebounds and finishing with a +23 edge on the glass against the Vaqueros. Those 49 rebounds were the second-highest single-game total of the season for the Aggies and were the team's most against a WAC opponent since going for 51 against Chicago State in the opening round of the 2018 WAC Tournament (March 8, 2018).
• Finding the open man was of utmost importance to the Aggies, too, as they finished with a season-high 23 assists in the victory. That assist total was the team's highest since it passed out 24 in a WAC home win over Chicago State on Jan. 9, 2020. Another five of those assists came from Nate Pryor who matched his career-high in that department.
• The Aggies went 9-of-23 (.391) from long range in the win, giving the team its best three-point field goal percentage in a game since shooting 40-percent (4-of-10) in a road win at UTEP back on Friday, Dec. 3, 2021.

SCOUTING TARLETON | ROSTER | SCHEDULE | STATISTICS
• The early rigors of Tarleton's schedule - one head coach Billy Gillispie called "the hardest in the country" prior to the start of the 2021-22 campaign - have started to pay off. The Texans roll into Las Cruces having hit their groove since late December of 2021 and have win five of their last six games.
• Included in those five wins over the last six games are WAC victories over Dixie State, Sam Houston and SFA which put Tarleton fourth in the latest edition of the league standings.
• One of the recipes for success for Gillispie's squad is a ferocious brand of on-ball defense. Opponent comfort levels are at an all-time low when playing Tarleton as they force 17.1 turnovers per game - the third-most among all WAC clubs. Tarleton also takes care of the ball, throwing it away just 12.5 times per game which results in a turnover margin of +4.59 - the second-best in the WAC.
• Tahj Small and Montre Gipson are the Texans' two foremost scoring threats as both rank among the top 10 point producers in the WAC. Small's average of 15.5 points per game is the seventh-best in the league while Gipson's mark of 14.9 per game ranks eighth. Small collected WAC Player of the Week accolades Monday morning while freshman Noah McDavid laid claim to WAC Freshman of the Week honors that same day.
• Gipson hardly ever takes a break once the ball is tipped as he tops the national charts in minutes played (603). Sophomore guard Shamir Bogues personifies the Texans' ball-hawking brand of defense by ranking second in the WAC and ninth nationally with 34 total steals.
• Now in his second year as the Texans' bench boss, Gillispie will be paying his third visit to the Pan American Center. During the early stages of the 21st century, Gillispie served as the head coach at UTEP and coached the Miners in games at the Aggies' home base in the 2002-03 and 2003-04 seasons. Gillispie is 1-1 all-time inside the Pan Am Center and will be making his first appearance inside the facility since Saturday, Dec. 6, 2003 - a night where he led UTEP to an 83-74 win over NM State.
• Tarleton is going in search of its second road win of the season. The Texans are 1-8 in true road tilts this season, but have played a murder's row of foes away from Stephenville, Texas, including third-ranked Kansas (Nov. 12), 20th-ranked Michigan (Nov. 24) and top-ranked Gonzaga (Nov. 29).

THIS DATE IN NM STATE HISTORY
• 109 years ago, NM State played its first-ever game on January 13. The Aggies dropped a 24-21 decision to El Paso High School under head coach Arthur H. Badenoch in 1912.
• More recently, NM State has won its last three games on January 13. The most recent of those triumph came in 2018 when first-year head coach Chris Jans led the Aggies to a 66-53 WAC triumph at CSU Bakersfield.
• In the 21st century, NM State is 3-3 on this date which included a perfect 3-0 record against WAC opposition.

COMING UP NEXT
• NM State's five-game swing against WAC foes from the state of Texas continues Saturday afternoon when Abilene Christian pays a visit to Las Cruces for the first time since 1966. Tip-off in the inaugural WAC meeting between the two clubs is set for 4:00 p.m. ESPN+ and the ESPN app will carry the action nationwide while Bally Sports Arizona Plus, Comcast New Mexico and The 'CW' El Paso/Las Cruces are set to televise the showdown regionally.