Aggies and Wildcats meet for firsts time since 1966 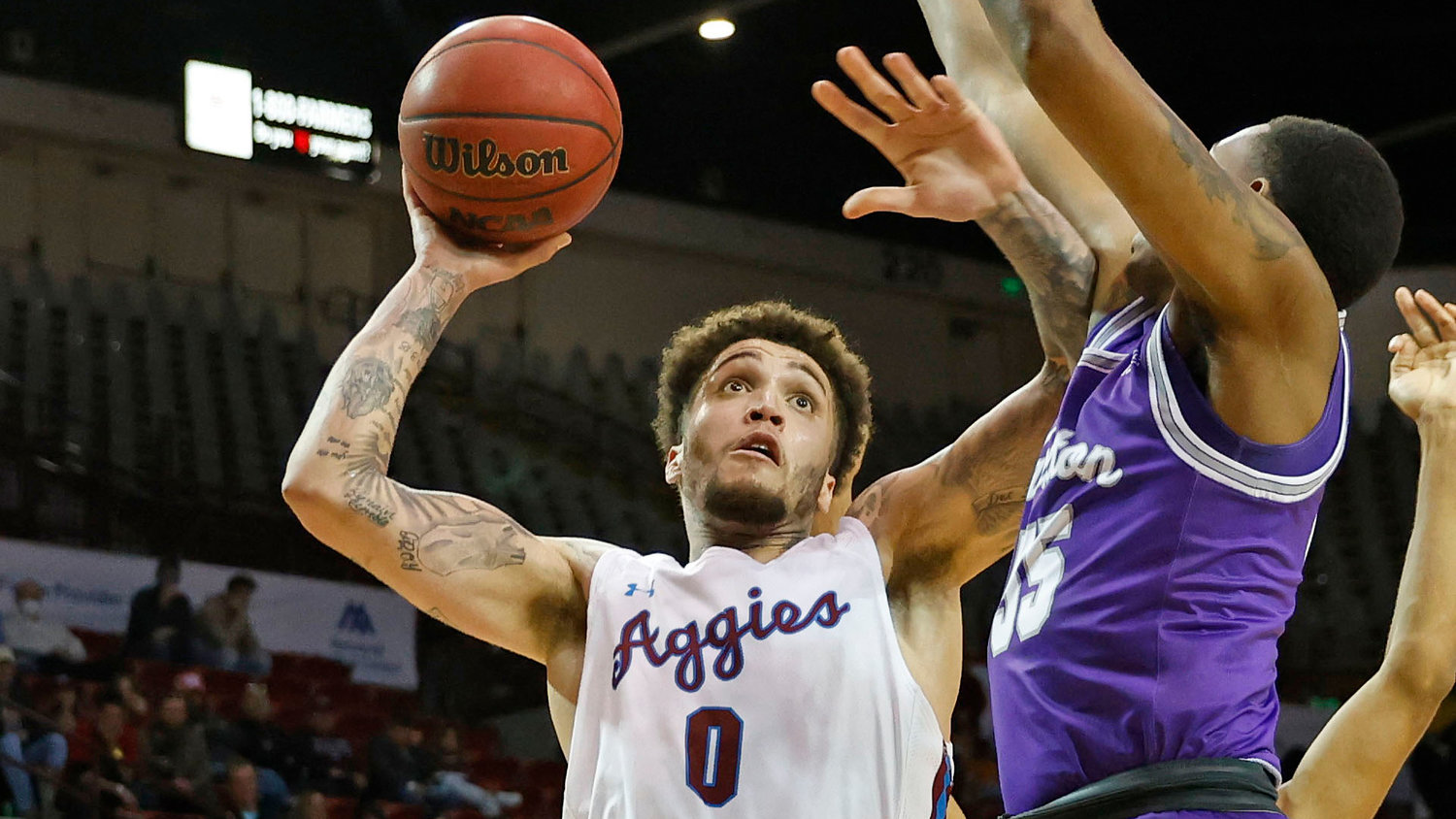 THE OPENING TIP• For the first time time in nearly six decades, NM State and Abilene Christian will be crossing paths on the hardwood. Saturday afternoon at 4:00 p.m. MT, one of the WAC's newest teams pays a visit to the Pan American Center to oppose the Aggies.• The ninth all-time meeting between Aggies and Wildcats - and the first between the two teams since January 1, 1966 - will be televised on Bally Sports Arizona Plus, Comcast New Mexico and The 'CW' El Paso/Las Cruces. Additionally, ESPN+ and the ESPN app will stream the action nationwide.• The play-by-play and analysis combo of Adam Young and former NM State player Joe Garza are set to narrate the action on all television and video streaming platforms. Over the airwaves, legendary radio play-by-play man Jack Nixon will set up shop courtside to call the action.• Nixon's play-by-play and analysis can be heard on 99.5 Zia Country FM in Las Cruces, N.M., and nationwide on The Varsity Network app.• Affiliate stations of the Aggie Sports Network can be tuned in to in Artesia, N.M. (990 AM), Carlsbad, N.M. (1240 AM), Gallup, N.M. (94.9 FM), Alamogordo, N.M. (103.7 FM) and El Paso, Texas (1380 AM). All of those stations will also carry Nixon's commentary of Saturday afternoon's tilt.

FAST BREAK POINTS• For the first time under head coach Chris Jans and for the seventh time in the history of the program, NM State has won 14 of its first 16 games to start the season. NM State previously started 14-2 through its first 15 games in 2016-17, 1990-91, 1989-90, 1967-68, 1938-39 and 1937-38.• Only three other teams in NM State history have put forth a better record than 14-2 through their first 16 games. The Aggies went 15-1 to start the year in 1993-94 and 1969-70 while the 1968-69 edition of the Aggies won their first 16 games out of the gates.• NM State's 14 wins are the fifth-most among all NCAA Division I men's basketball teams this season as well as the most by any WAC team.• NM State has won its last 26 home games against WAC opponents dating back 2017. The Aggies' last loss to a WAC team in the Pan American Center came on Feb. 23, 2017, when they dropped an 84-72 decision to Utah Valley.• Since the start of the 2009-10 campaign, NM State owns an 82-4 (.953) record in WAC home games. Those four losses came by a combined 34 points (an average of 8.4 per game).• NM State head coach Chris Jans is 53-9 (.858) in regular-season WAC games as the Aggies' head coach. Included in that record is a perfect 25-0 (1.000) showing against WAC squads inside NM State's home venue of the Pan American Center.• NM State's .858 winning percentage in WAC regular season games under Jans is the nation's second-best in-conference winning percentage figure since 2017-18. Only Gonzaga's (65-2, .970) is higher.• NM State is one of three teams in the WAC who have not yet suffered a league loss so far this season. The Aggies are joined in that category by Grand Canyon (13-2, 4-0 WAC) and Seattle U (11-4, 2-0 WAC).• Tarleton is one of just three current WAC programs who NM State has an active losing streak against. NM State dropped its last matchup with the Texans and is also hoping to put an end to losing skids against both Sam Houston (one game) and Grand Canyon (three games) this season.• Since stepping foot in Las Cruces, high-scoring guard Teddy Allen has put in at least 10 points in all 16 of the Aggies' games. Jabari Rice's streak of double-digit scoring outings stands at four games.

LET'S GO STREAKING• NM State's nine-game winning streak is the third-longest active streak in the nation and the longest among all WAC clubs.• That winning streak has pushed NM State's win total to 14 - the most by any WAC team and the fifth-highest win total so far this season in all of college basketball.

MISCELLANEOUS & MILESTONES• NM State's collective field goal percentage of .473 ranks 49th in the nation and second among all WAC teams.• The Aggies' rebounding margin of +7.5 is the 26th-best in the nation as well as the third-best in the WAC.• NM State ranks 39th nationally in terms of field goal percentage defense. The Aggies are allowing their opponents to shoot just 39.4-percent from the floor this season which is the third best among all WAC teams.• In one of his most recent games, redshirt junior guard Jabari Rice put in 22 points in NM State's win at Washington State (Dec. 15). When Rice scores 20 or more points in a game, NM State is 9-1.• High-scoring guard Teddy Allen leads NM State in scoring at a rate of 17.2 points per game and also ranks 15th nationally in free throw percentage (.902). The Phoenix, Ariz., product also sits among the top 50 players nationally in field goal attempts (45th, 219).• With head coach Chris Jans leading the way, the Aggies have posted a 6-6 (.500) record against Power Five opponents. That mark includes a 6-4 (.600) showing against Power Five foes in regular-season tilts. NM State has secured wins over Illinois, Miami, Mississippi State and Washington State (three times) under Jans' direction since 2017-18.• Jans returned to the bench on Friday, Dec. 3, 2021 for the Aggies' game at UTEP. The team's fifth-year bench boss had previously missed its last two games due to COVID-19 protocols.• In a 101-94 home loss to New Mexico on Monday, Nov. 30, 2021, the Aggies gave up 100 or more points to the opposition for the first time in the Chris Jans coaching era. Before that game, the last time NM State let a foe hit the century mark came in 2017 when it claimed a 107-101 WAC win at UTRGV on Feb. 18. Since 2010, only three NM State opponents (Nevada, New Mexico and UTRGV) have amassed 100 or more points in a game.• Now in his fifth season in an NM State uniform, Johnny McCants has broken into the program's top-ten leaders in blocked shots. McCants, a Las Cruces, N.M., product has 102 rejections to his credit as a collegian which are the eighth-most all-time by any Aggie. Other Aggies who rejected 100 or more shots in their respective careers include James Moore (200), Sim Bhullar (196), Hamidu Rahman (137), Pascal Siakam (137), Tshilidzi Nephawe (135), Slab Jones (124) and Charles Gosa (116).• Three NM State players are all fast approaching the 1,000-point mark for their respective NCAA Division I careers. Johnny McCants needs 77 more points to get there while Jabari Rice is 88 points away from quadruple digits in the scoring column. Teddy Allen requires just 119 more points to reach the 1,000-point plateau in his NCAA Division I playing career.

LAST TIME OUT | NM State 73, vs. Tarleton 57 | Thursday, Jan. 13, 2022• A 19-3 run over a span of 3:58 in the second half allowed the NM State men's basketball team to turn a four-point lead into a 20-point cushion as the Aggies cruised to a 73-57 triumph over Tarleton Thursday night inside the Pan American Center.• Nine of the 11 NM State players who logged minutes in the team's third all-time win over the Texans finished with points.• Teddy Allen and Clayton Henry each contributed 15 points to the Aggies' cause. For the latter, those 15 points represented his highest scoring output of the season.• Henry made his first start of the 2021-22 season Thursday night and responded by coming through with his best outing of the year. After sustaining an injury in summer workouts and missing the majority of the Aggies' non-conference season, Henry had been slowly adding to his on-court workload since making his season debut in mid-December.• Jabari Rice wrapped up a good all-around performace with six points, a game-high nine rebounds and a game-high four assists. Those nine boards tied a season high for the Houston, Texas, product and helped offset a 2-of-11 shooting performace.• Mike Peake proved to be a dependable option off the bench for the second-straight game. The native of Chicago, Ill., sprung for 12 points on a 5-of-7 effort from the field. Through his last two games, Peake is averaging 11.0 points while shooting 9-of-12 (75-percent) from the field and 4-of-7 (57.1-percent) from three-point range.• Speaking of three-pointers, NM State connected on 12 of them in its 16-point victory. Those 12 triples were the second-highest single-game total for the Aggies in 2021-22 and all told NM State drilled 42.9-percent of the shots it attempted from that distance. That three-point field goal percentage was the second-highest in a game this season for the Aggies.• With the win, Johnny McCants secured the 109th victory of his collegiate career. That puts the Las Cruces, N.M., product just one win away from tying Ian Baker for the most career wins by an Aggie player in program history. Baker racked up 110 victories through his time in an NM State uniform.• NM State used its fifth different starting lineup combination of the 2021-22 season Thursday night against the Texans.• Junior guard Nate Pryor and graduate forward Yuat Alok missed Thursday night's game due to COVID-19 protocols.

SCOUTING ABILENE CHRISTIAN | ROSTER | SCHEDULE | STATISTICS• Not since the 2019-20 has Abilene Christian lost three-straight games in the same season but that's the position the Wildcats find themselves in as they head to Las Cruces for Saturday afternoon's showdown.• After reeling off 11 consecutive wins from Nov. 16, 2021 through January 1, 2022, Abilene Christian hasn't won since. The Wildcats dropped each of their last three WAC matchups including a 95-68 drubbing at the hands of Grand Canyon Thursday night in Phoenix.• First-year head coach Brette Tanner took over for Joe Golding ahead of the 2021-22 season after Golding left Abilene, Texas, to take the head coaching job at UTEP. Though Golding departed, Tanner retained the remainder of Golding's staff as well as the Wildcats' penchant for an intense brand of defense.• Abilene Christian leads the nation in both turnovers forced per game (22.75) and turnover margin (10.1). That ball-hawking defense the Wildcats employ has allowed them to rack up steals at a rate of 11.7 per game - the nation's second-highest rate.• Another ingredient in the Wildcats' recipe for success has been free throw shooting. Abilene Christian currently ranks 22nd in the land in free throws attempted (341) and 23rd nationally in free throws made (247). In all, the Wildcats get 19.6-percent of their total offensive output from the foul line.• Point guard Damien Daniels has proved himself to be one of the best ball handlers in the WAC. His assist-to-turnover ratio of 2.52 is the third-highest figure in the WAC and the 39th-best in the nation.• Daniels is a top-100 steal getter, too, with 27 to his credit. That total is the fourth-highest in the WAC as well as the 77th-best in the nation.• Reggie Miller is the Wildcats' top on-ball defensive threat. Just one WAC player has racked up more steals then his 31 this season and that total is the 33rd highest among all NCAA Division I men's basketball players.• Balanced scoring gives the Wildcats the edge in many of their contests. Coryon Mason (11.7 points per game) tops the Wildcats' charts in scoring while Airion Simmons (10.0 points per game) is the only other ACU player who averages double-digits.• Abilene Christian is 2-1 in WAC road games this season and 3-3 on the road overall in 2021-22.

COMING UP NEXT• The final Texas road trip of the regular season looms for NM State next week. The Aggies are bound for the eastern portion of the Lone Star State to continue WAC action against two of the newest teams in the league. First up during the team's two-game swing is a stop in Huntsville, Texas, for a Thursday evening showdown at Sam Houston. Tip-off inside Bernard G. Johnson Coliseum is set for 5:30 p.m. MT.