NM State tripped up by Lobos 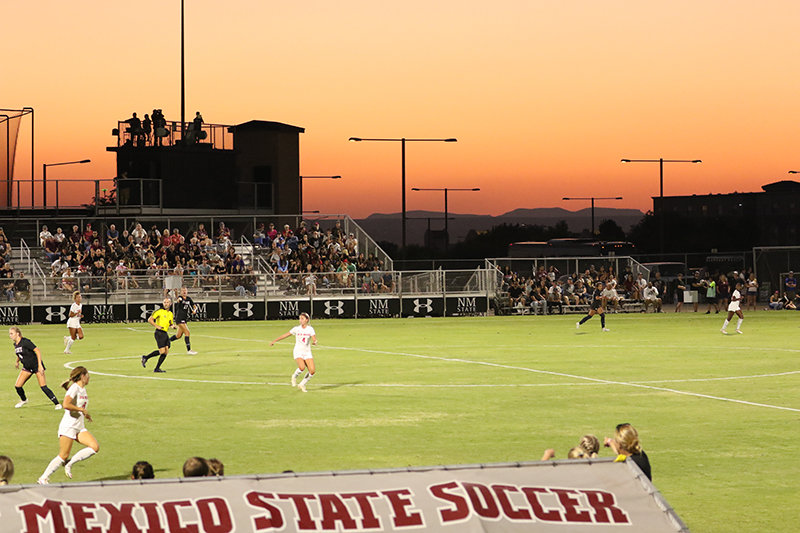 The New Mexico State soccer dropped a 3-1contest in the Battle of I-25 on Thursday night at the Soccer Athletic Complex.

The Lobos (5-2, 0-0 MWC) were aggressive coming out of the gate and got on the board in the 10th minute when the Aggies (4-4, 0-0 WAC) misplayed a ball in the box and Zaria Katesigwa finished. Xitlaly Hernandez had a chance at an equalizer but her rocket from the left side of the 18-yard box was saved by UNM keeper Emily Johnson in the 13th minute.

NM State fell further behind following a UNM goal in the 28th minute. However, Corey Kizer had a great opportunity in the 34th but her header sailed just over the cross bar and the Aggies headed into the halftime break trailing 2-0.

The Aggies controlled possession early on in the second half but the Lobos extended their lead to 3-0 in the 66th minute. Megan Ormson would score for NM State on a header from a ball from Gia Valenti in the 76th minute but that was the only goal the Aggies would score as they fell 3-1.

As a team, NM State was outshot 12-10 but had six shots on goal to the Lobos five.

The Aggies now set their sights on Gonzaga as the Zags visit the Soccer Athletic Complex on Sunday, Sept. 19, at 1 p.m. (MT). Fans can stream all the action live on the WAC Digital Network.