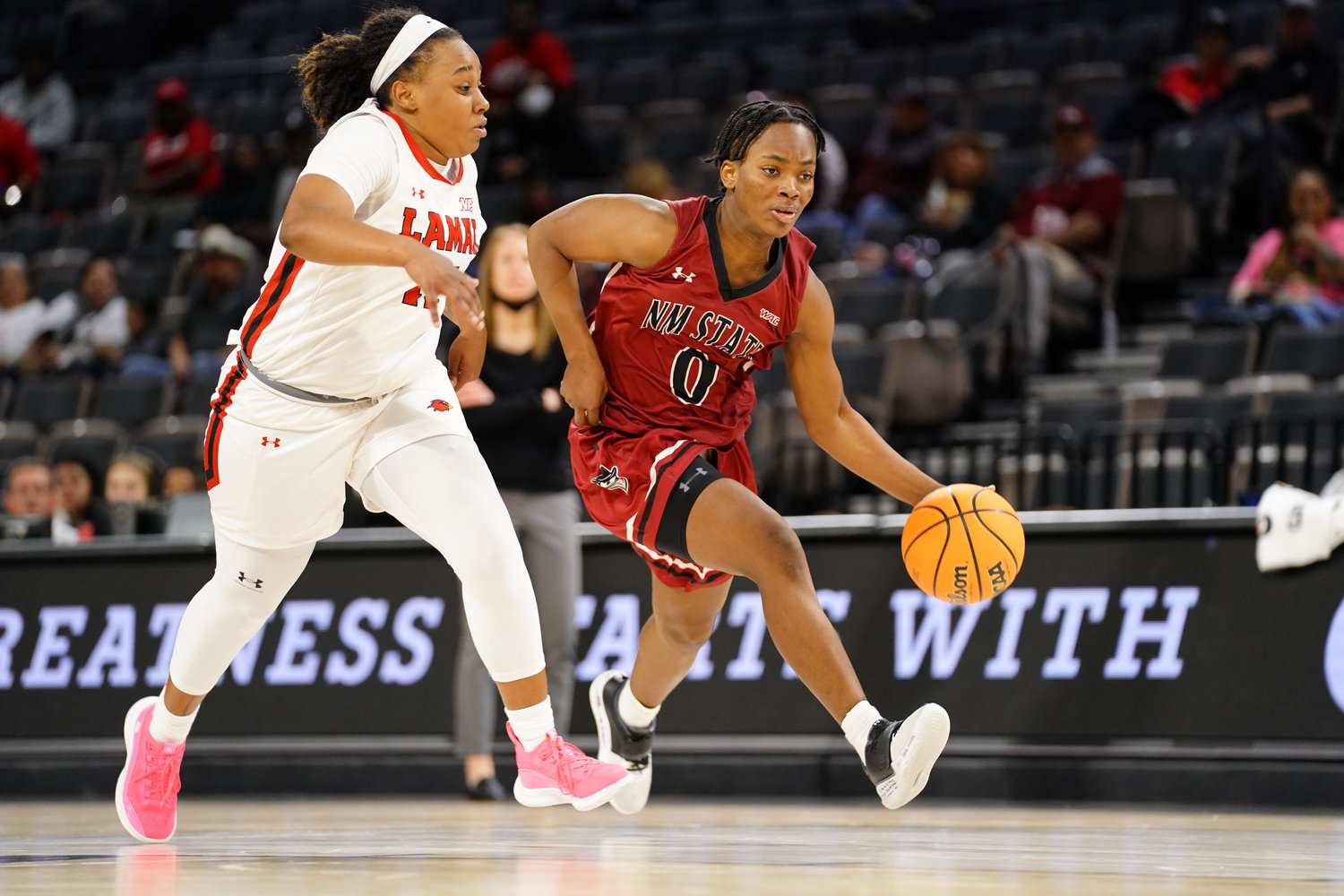 LAS VEGAS – NM State's season came to a conclusion after falling, 54-65, to seventh-seeded Lamar in the opening round of the 2022 WAC Tournament in Michelob ULTRA Arena inside the Mandalay Bay.

From an individual standpoint, Second Team All-WAC honoree Bigue Sarr led the way with 13 points and 11 rebounds. Meanwhile, junior Soufia Inoussa also pitched in eight points and a pair of boards. Jade Bradley and Molly Kaiser each finished with seven points to rank tied for third on the team in points.

The Aggies had one of their most eye-popping performances on the glass all year as they pulled down 24 offensive rebounds; they only grabbed 24 offensive rebounds one other time this season. Despite creating so many second-chance opportunities, the Aggies finished the game with just 15 second-chance points. Surprisingly, they were bested in the rebound category as Lamar grabbed 43 – two more than the Aggies' 41.

Lamar was led offensively by Angel Hastings who scored a career-high 25 points to lead the Cardinals to victory. Portia Adams was also a top scorer as she finished with 14 points while adding six rebounds in 28 minutes.

FIRST QUARTER
• After the two sides combined for four empty possessions, Soufia Inoussa was able to get the Aggies on the board with a layup after collecting an offensive rebound.
• Inoussa would score four of the first six Aggie points as she also reached knocked a pair down from the free-throw line with 7:14 remaining to give the Aggies a 6-5 lead early on.
• Making free throws would be an area in which the Aggies would struggle in the opening round game as they finished the contest 7-of-17 from the charity stripe. Meanwhile, Lamar connected on 21 of its 22 free-throw attempts after shooting just 66.5 percent on the year.
• Later in the quarter, Jade Bradley would score her third and fourth points of the afternoon as she got a layup to fall through contact which drew a foul.
• Molly Kaiser tallied her first points of the game when she scored the final points of the quarter to even the score at 14 with 52 seconds remaining in the quarter.

SECOND QUARTER
• Mel Isbell entered the game in the second quarter and made an immediate impact as she hit a three-pointer to start the scoring in the second period. This would be the Aggies' lone triple of the evening as NM State finished the game 1-of-11 from deep.
• Kaiser would then score with 7:06 left in the quarter to help the Aggies go on a 7-0 run beginning with Kaiser's points in the first quarter.
• Lamar's Hastings would eventually put a stop to the Aggie run as she would knock down three free throws after drawing a foul from beyond the arc. This would set the score at 19-17 in favor of the Aggies with 6:44 remaining.
• The two sides would trade buckets for the remainder of the quarter as the Aggies would close the half with a one-point advantage after Bigue Sarr scored with just 16 seconds remaining in the first 20 minutes.
• In total, the Aggies would limit the Cardinals to just 25 percent from three-point land while outscoring Lamar 18-6 in points in the paint.

THIRD QUARTER
• Jade Bradley scored the first points for either team after she looked trapped on the right block and shimmied her way free to score over her right shoulder.
• The stretch of the game ranging from the 7:02 mark on the clock to the 3:14 mark belonged to the Cardinals and was really the only point where Lamar created separation. During that stretch, Lamar rattled off a 10-2 run to take an eight-point lead.
• Shania Harper created a spark off the bench during the final two minutes of the quarter as she collected a steal and scored four points, including two that came off an offensive rebound. However, Lamar continued to score at the same pace of the Aggies during the remainder of the quarter as they were able to take an 11-point lead into the final quarter.

FOURTH QUARTER
• Despite the Aggies scoring four early points thanks to Soufia Inoussa and Bigue Sarr, the Cardinals' Hastings was able to create enough offense to help her team maintain a 13 point lead with 4:22 remaining as the senior knocked down three triples to score all nine of Lamar's fourth-quarter points to that point.
• The final Hastings three preceded a Taylor Donaldson layup with 3:24 remaining in the tilt, however, the Aggies would go scoreless over the next two minutes to stare at a 15-point deficit late in the game.
• Grace Colavailu saw her first action of the night in the closing minutes and would serve as the only source of offensive production for the Aggies late in the game. The senior scored the Aggies' final six points while going three-for-three from the field.

WRAPPING THINGS UP
• The loss in the WAC Tournament concludes the Aggies' 2021-22 season as they finished with an overall record of 10-19 while going 6-10 in conference play.