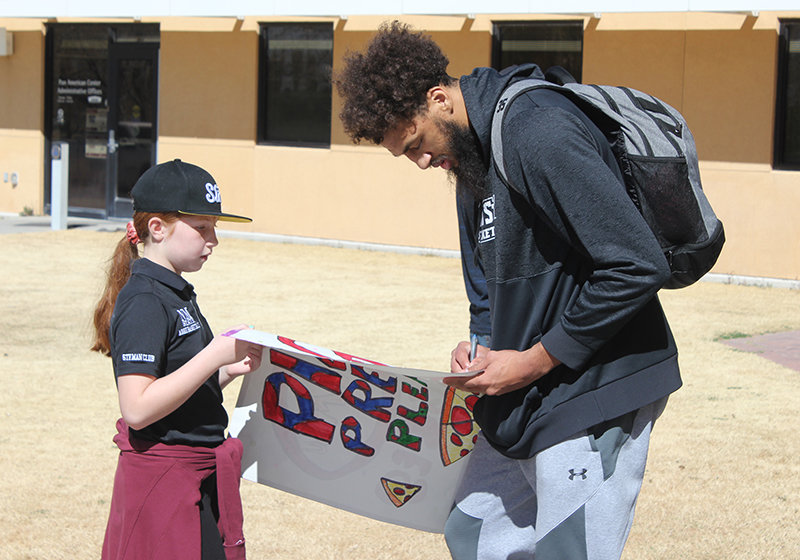 In the last hundred years, the top six college basketball programs in America are, in no particular order: UCLA, North Carolina, Kansas, Kentucky, Indiana and Duke.

You can debate that if you want, and many will, but I’m not here to talk about those guys.

I’m here to talk about our own New Mexico State University Aggies.

In the past hundred years, a heck of a college basketball program has bloomed here in the desert, despite the lack of national recognition.

Let’s look at some history.

From 1936-39, for three straight seasons, Coach Jerry Hines led the Aggies to 20-win seasons, back when teams often didn’t even play 20 games in a season. His combined record in that stretch was 64-12.

Henson also had a couple of 19-win seasons en route to his 289 total NMSU victories which, of course, is the school record. Henson had two stints as the Aggies’ head coach, from 1966-75, and again from 1997-2005. The Aggies’ Final Four banner from the 1970 season reflects Henson’s greatest season.

Of course, in those big six programs mentioned above, anything less than a 20-win season is a big disappointment. But for most of the 353 Division I college basketball programs in America, 20 victories remains a big accomplishment.

Having three different coaches with seven 20-win seasons (and a fourth on the way) is huge.

The Aggies currently compete in the Western Athletic Conference, one of many conferences termed a “mid-major” conference. Starting with the 2023-24 season, NMSU basketball will be part of Conference USA, another mid-major. As a mid-major, we don’t always attract the attention of some of the country’s best high school recruits or the national media.

Regardless, get one thing clear: New Mexico State University is a bona fide, top-notch basketball school.

Not only that, Aggie hoops is one of the best entertainment values in Las Cruces. In its 54-year history, the Pan American Center has seen NMSU’s men’s team win 81 percent of its home games. In recent years, that’s been even more dramatic. You have to go back to 2011-12 to find a season where the Aggies have lost more than two home games. The team just finished its ninth straight year of losing just one or Pan Am games, with a record of 130-12, winning at a clip of 92 percent in that stretch.

A testament to how much fans enjoy their Aggie hoops came recently when an anonymous donor gave $2.9 million for the construction of special suites inside the Pan Am for fans, groups and organizations to see the games in a special way.

One thing the Aggies have missed since 1993 is a victory in the NCAA tournament, although they’ve had several close calls, most recently losing in 2019 by one point to Auburn, who went on to go the Final Four. Since this column was written and printed prior to the Aggies’ NCAA tourney game against UConn Thursday afternoon at 4:50 p.m. MDT, I don’t know whether NMSU broke that seal or not.

But I do know this, as long as Coach Jans is here and -- history tells us -- even after he moves on and a new coach arrives, NMSU will put a great basketball team on the Pan Am floor.