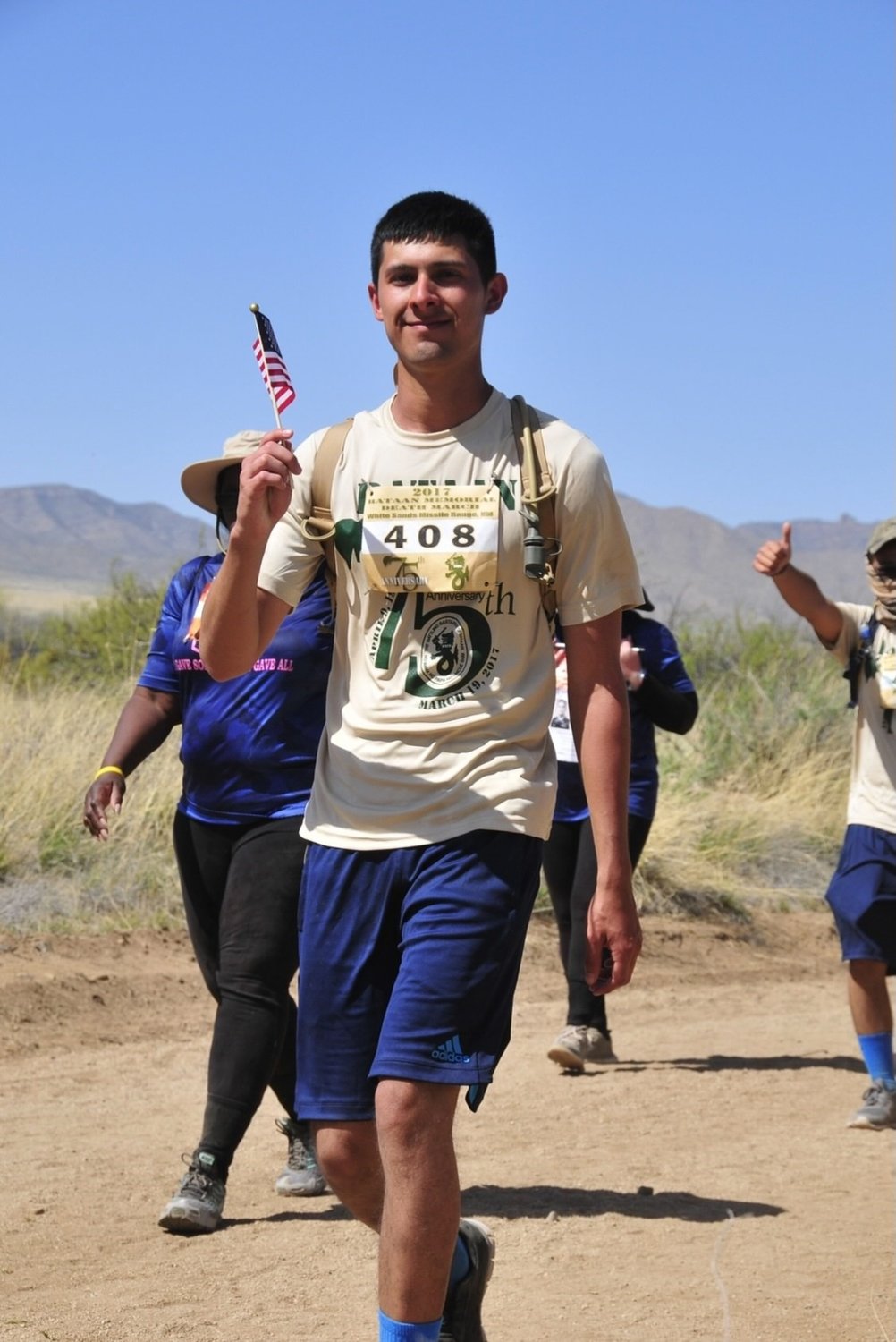 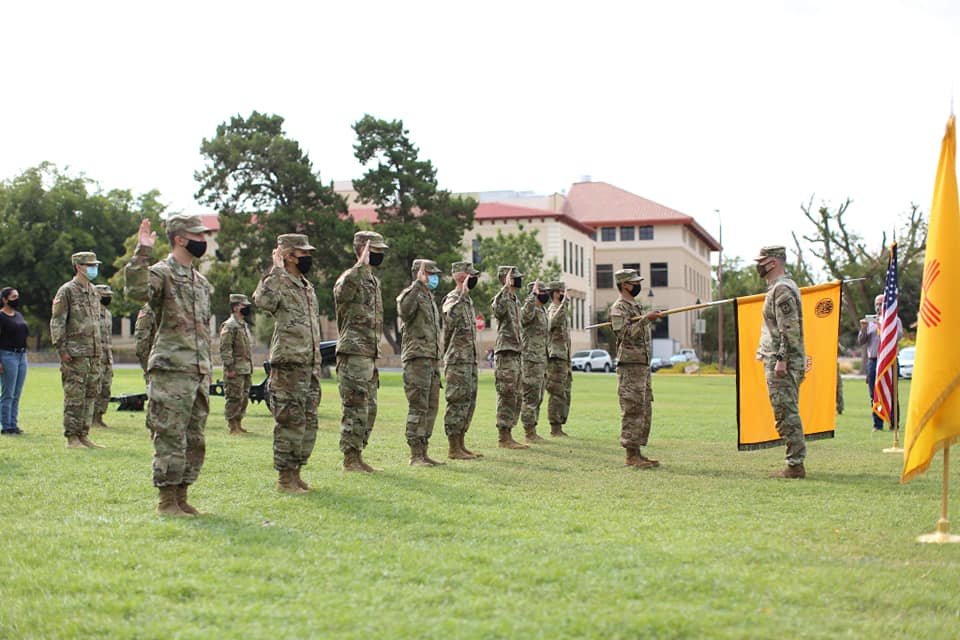 NMSU ROTC Scholarship cadets contracting with the U.S. Army and taking the oath to support and defend the Constitution of the United States.
NMSU ROTC photos 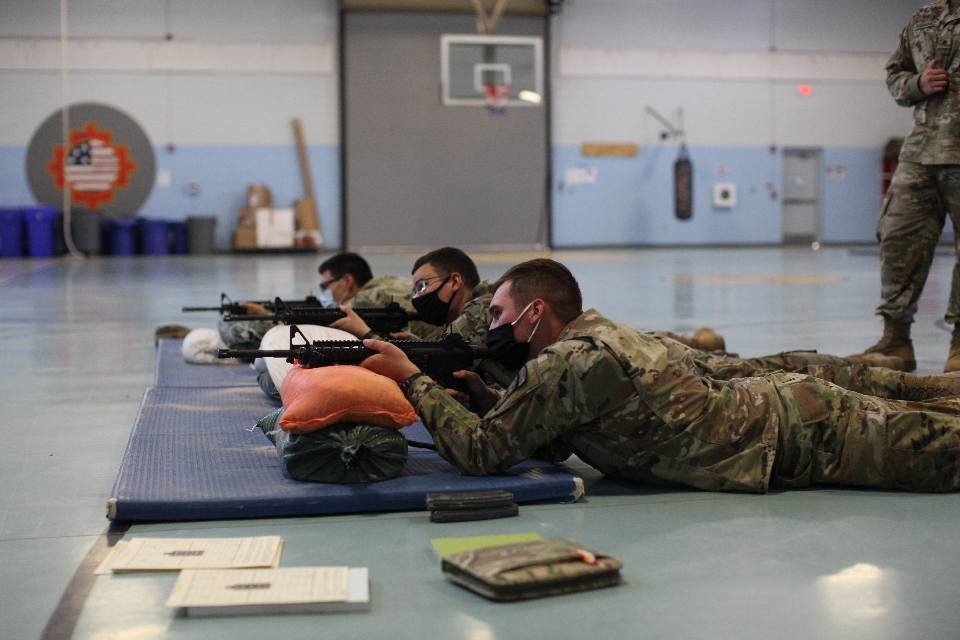 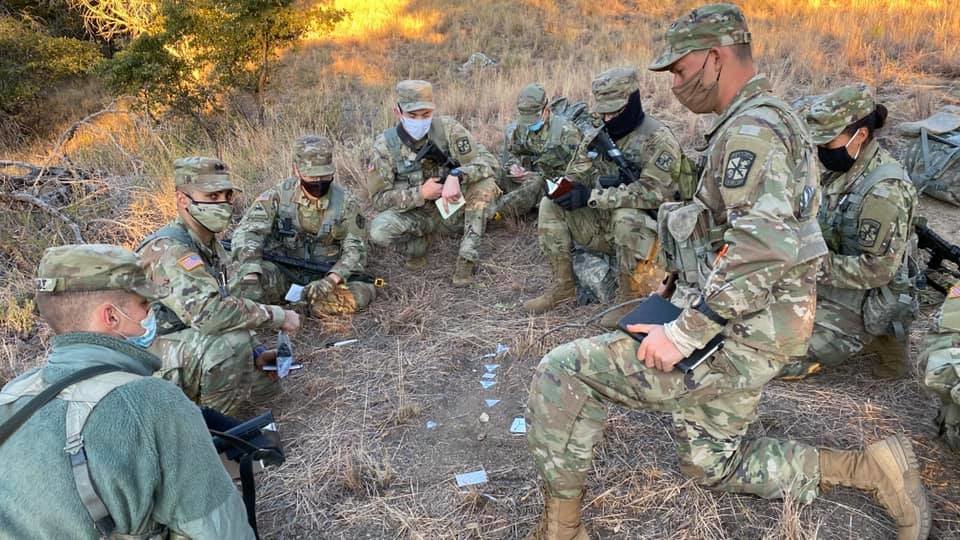 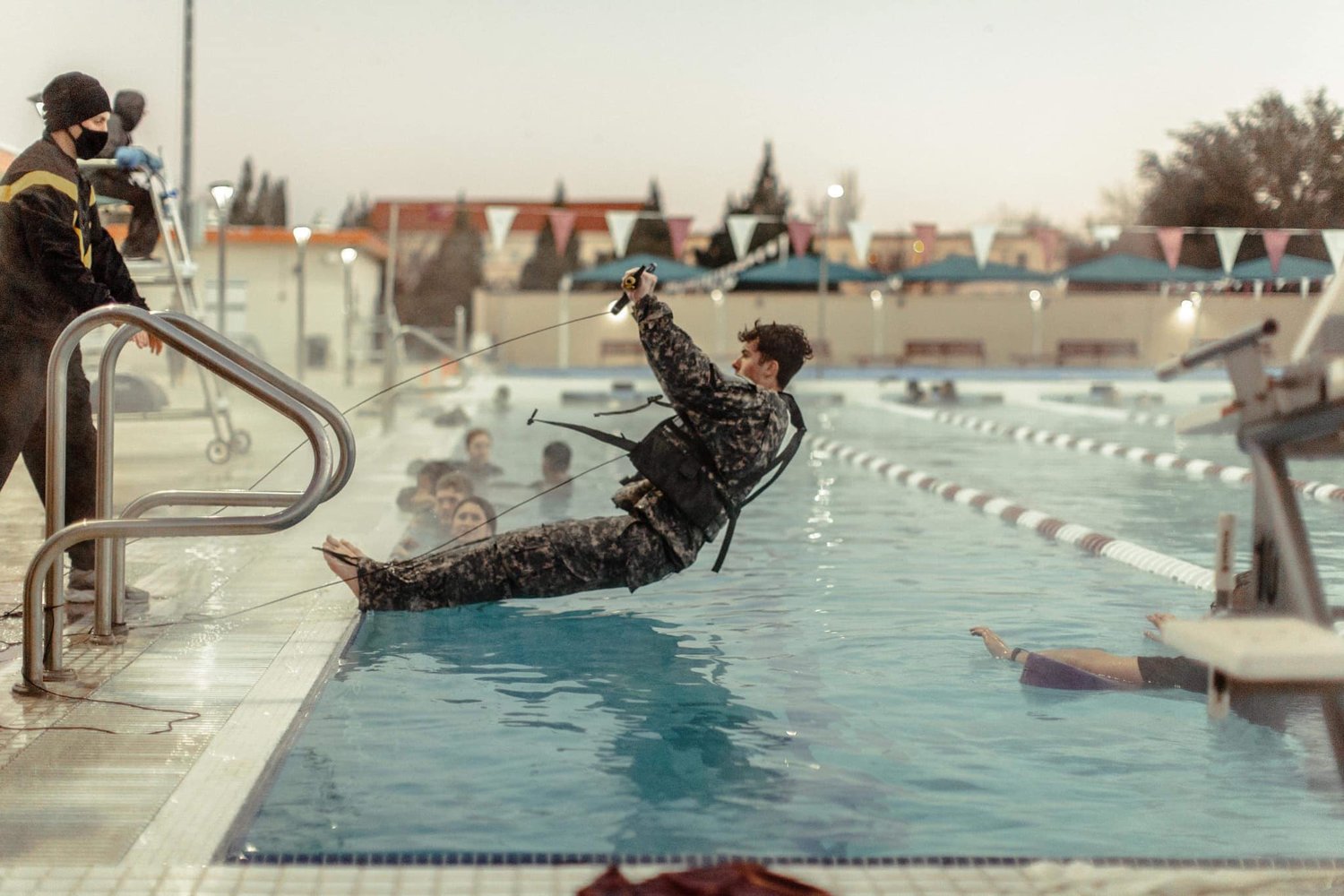 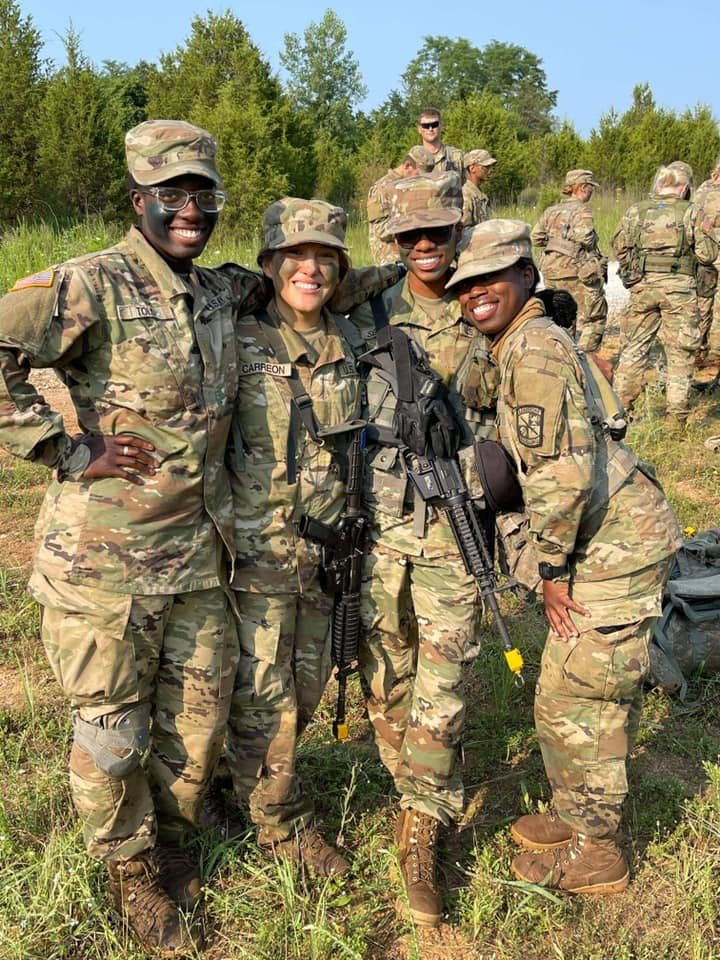 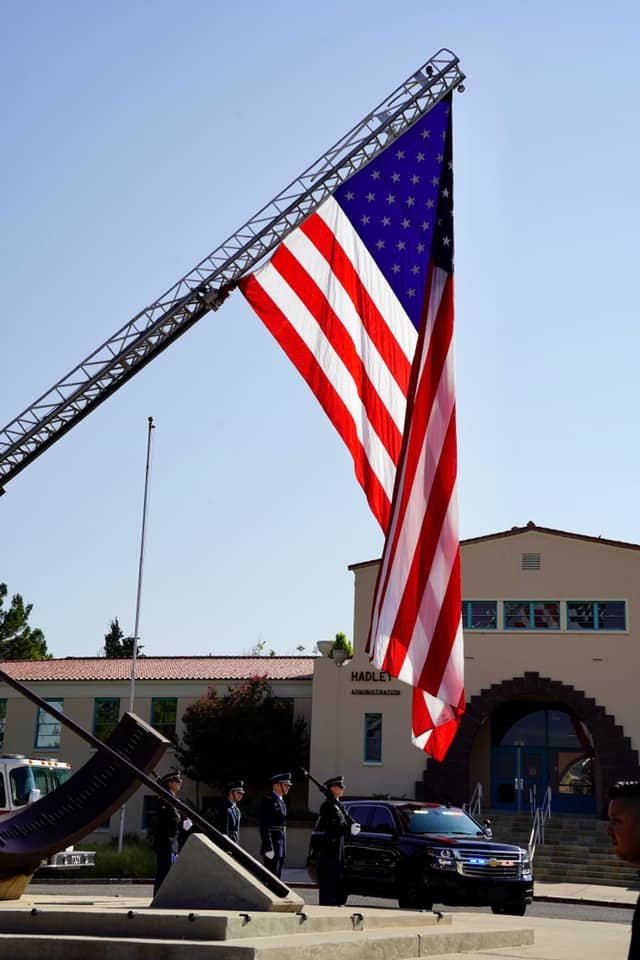 The NMSU ROTC Color Guard posts the colors during this year’s 9/11 ceremony at Pride Field on campus.
NMSU ROTC photos 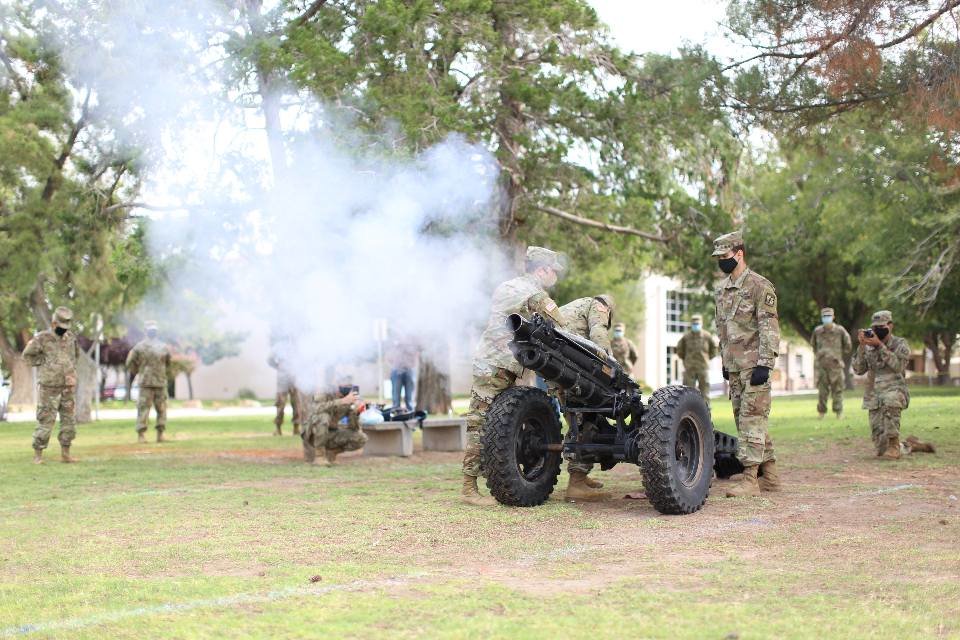 “The memorial march is conducted in honor of the heroic service members who defended the Philippine Islands during World War II, sacrificing their freedom, health, and, in many cases, their very lives,” according to the website.

Among the units defending the Philippines was the 200th Coast Artillery, organized in New Mexico in 1935 to replace an earlier horse cavalry unit. It was deployed to the Philippines in September 1941 and included more than 1,700 soldiers from every county in New Mexico. More than 1,000 were on the Death March.

After their April 9, 1942 surrender following a five-month battle to stop the Japanese invasion of the Philippines, an estimated 75,000 U.S. and Filipino prisoners of war and thousands of noncombatants were forced to walk 60-70 miles through jungles along the Philippine Islands’ Bataan peninsula to trains that took them to prison camps.

Thousands died on the march, including an estimated 1,000 Americans.

New Mexico State University was founded as Las Cruces College in 1888. Fourteen years later, during the 1902-03 school year, the college began the Department of Military Science and Tactics, which evolved into the NMSU “Desperado” Battalion.

In 1989, the Desperado battalion was re-named to the “Bataan” Battalion “to recognize the contributions of New Mexico veterans during World War II in the Battle of Bataan, December 1941-May 1942,” the Bataan Battalion said on Facebook.

The cadet class of 1988 held the first Bataan Memorial Death March in April 1988, as NMSU celebrated its 100th anniversary. The march route began on the NMSU horseshoe and traveled east to Baylor Canyon Pass in the Organ Mountains. The event was moved to White Sands Missile Range in 1989.

Today, Cavazos 1st Lt. Saul Navarro, 25, is the recruiting operations officer for the NMSU ROTC program, which has 56 students enrolled, and is a big proponent of and participant in the march. (The rank of “Cavazos first lieutenant” honors U.S. Army Gen. Richard E. Cavazos (1929-2017), who was awarded a Distinguished Service Cross as a first lieutenant during the Korean War. He was the Army's first Hispanic four-star general.)

A native of El Paso, Navarro said he first became interested in the military when he saw Army recruiters at his middle school. He joined JROTC while attending Bel Air High School in El Paso and decided to make a career of it more than three years ago.

“I could see myself doing it,” Navarro said. Once he got the uniform on, Navarro decided, “I like this,” he said. “I’ll stick with it.”

When his time at NMSU is up next May, Navarro will be promoted to the rank of captain and move on to his next duty station at Fort Sill, Oklahoma.

But that’s not before Navarro participates in his eighth BMDM next March 20.

Because of its terrain and high altitude, BMDM is among the most difficult marathons in the United States, Navarro said. He’s looking forward to pushing the miles he’s logged in the event since age 15 to more than 200. Navarro has also participated in marathons in Oklahoma City and in El Paso, he said.

As a recruiter, Navarro talks to area high-school students and other interested groups and organizations not only about the NMSU ROTC’s Memorial Death March teams, but also about the many other life, scholarship and career opportunities offered by the program.

Navarro said any NMSU student can take the ROTC class for credit. Cadets learn basic military skills, including marksmanship and land navigation, the fundamentals of leadership and prepare themselves to become U.S. Army officers and pursue a military career like Navarro.

In addition to the Bataan Memorial Death March teams, NMSU ROTC also has a color guard team that regularly participates in NMSU athletic events as well as university and community parades and other special events. There’s even a cannon crew.

And, cadets can apply for scholarships to help pay for their educations.

Navarro said ROTC can help students “know their path and keep them on track.”

Visit https://armyrotc.nmsu.edu/ and find them on Facebook at NMSU Army ROTC.