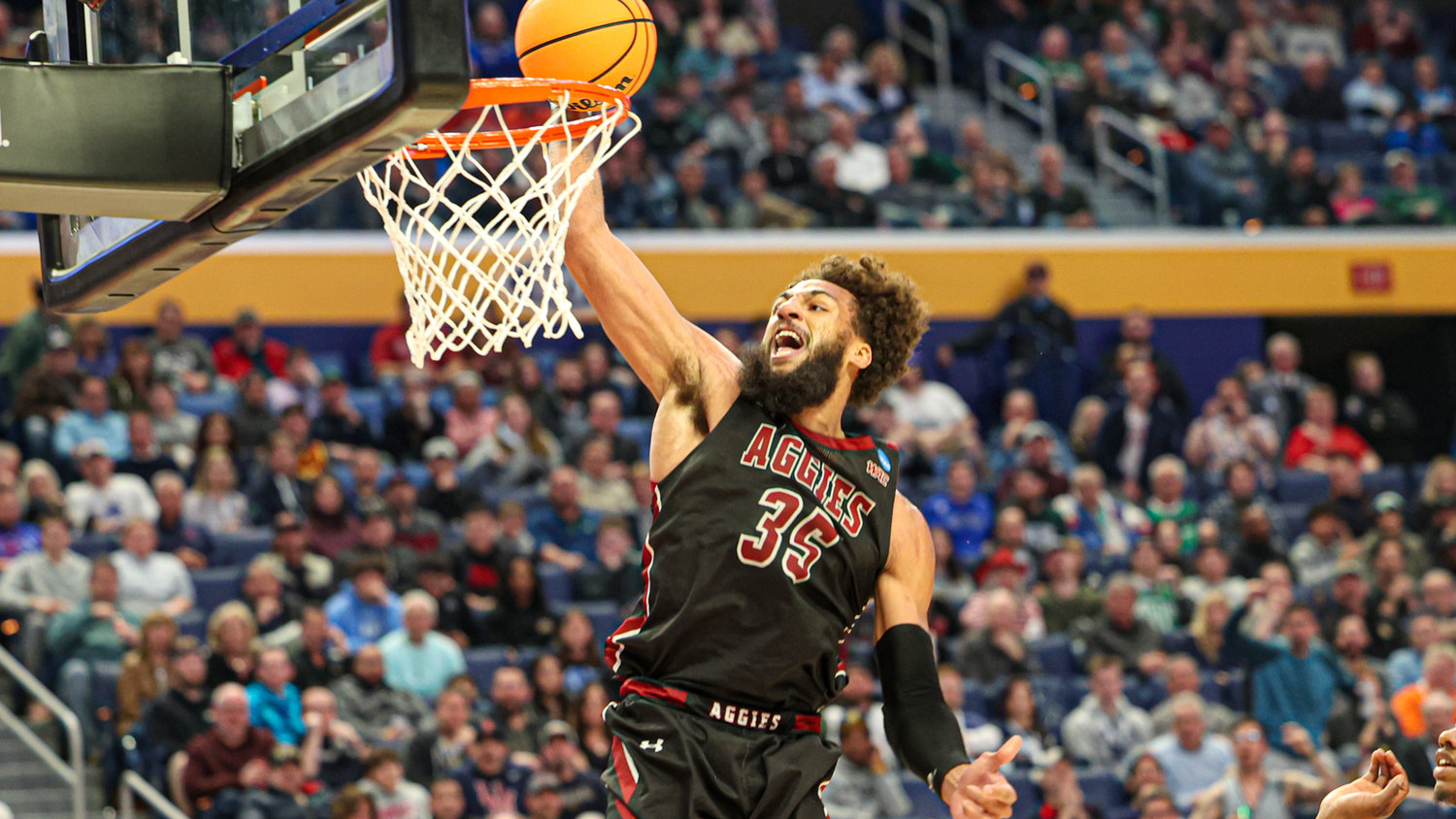 BUFFALO, N.Y. - A little over 48 hours removed from its best three-point shooting performance of the season, NM State simply couldn't get enough of them to drop on college basketball's biggest stage.

The defensive effort was there, but, unfortunately, the shots just did not fall for NM State as its magical run in the NCAA Tournament came to a painful end with a 53-48 loss to #17/18 Arkansas Saturday night in the second round of the Big Dance.

NM State went just 6-of-26 (23.1-percent) from long range which factored into the team's 34-percent (18-of-53) clip from the field as a whole. As a result, the Aggies were denied a trip to the Sweet Sixteen - something that hasn't happened in Las Cruces since 1992.

FIRST HALF
• A defensive slugfest right from the opening tip, the game featured just 18 combined points through the first 12 minutes of action.
• NM State took one of its two two-point leads of the frame when Teddy Allen connected on a step-back jumper 35 seconds in to give the Aggies a 2-0 lead.
• Yuat Alok made matters 9-7 in favor of the 12-seed by splitting two tries at the foul stripe with with 9:21 on the clock.
• The first real spurt of offense generated by either team came following the under eight media timeout. Unfortunately, it was Arkansas who heated up and broke a 9-9 deadlock by going on a 15-2 run which spanned until less than two minutes remained in the stanza.
• JD Notae keyed the surge, pumping in 10 of the Razorbacks' 14 points through that surge which put the Aggies at a 24-11 disadvantage.
• Finally, NM State got a few shots to tickle the twine as the half came to a close. Nate Pryor, who made his NCAA Tournament debut, connected on a floating jumper with 1:36 to go before Clayton Henry connected on his biggest shot of the game.
• With 1.9 seconds to go, the senior out of Calgary, Alberta, Canada, canned a triple on the wing off of a great assist from Pryor. Henry was fouled on the try, too, and completed a four-point play to pull the Aggies within nine at the halftime horn.
• The teams combined to go only 15-of-52 (.288) from the field through the opening 20 minutes of action. Arkansas' 15-2 run allowed it to take a 26-17 lead at the break.

SECOND HALF
• Not wanting their magical March run to come to an end, NM State turned to the pride of Las Cruces, N.M., to make their move in the final frame.
• A 16-6 NM State run through the first twelve minutes of the frame was what the Aggies went on by making it a point to pound the ball inside. Using the moves of Will McNair Jr., and McCants down low and at the foul stripe, the Aggies retook the lead with 8:06 left.
• McCants and McNair Jr., accounted for all but two of the Aggies' points through that 16-6 scoring surge with the former giving NM State its final lead of the game, 33-32, by going 1-of-2 on a trip to the foul line.
• Following McCants' free throw make, Arkansas hit the Aggies with what turned out to be a backbreaking 9-0 run in just 1:49. Au'Diese Toney capped the Razorbacks' surge with a powerful one-handed fast-break slam that put NM State in a 41-33 hole.
• With points at a premium and NM State struggling to score, that nine-point deficit seemed like more. Though the Aggies pulled within two (48-46) following a Jabari Rice triple in the corner with 11 seconds left, Arkansas put the game away at the free throw line by going 5-of-6 down the stretch.

KEY PERFORMERS/STATISTICS OF NOTE
• McCants left every iota of his excellent all-around basketball game on the floor of the KeyBank Center Saturday night, finishing with a 16-point, 12-rebound double-double to go along with two blocked shots, a pair of assists and two steals.
• Allen amassed 12 points and was the only other NM State player to finish with double-digits.
• Despite holding a 41-36 edge in the rebounding department, it was not enough to offset 19 NM State turnovers which Arkansas turned in to 15 points.
• The Razorbacks' speed came into play on a number of occasions as the Sweet Sixteen-bound club finished with a 15-0 edge in fast break scoring.
• Though NM State held Arkansas to a field goal percentage of just 27.5-percent (14-of-51), the Razorbacks made up for it by going 22-of-25 (88-percent) from the foul line. Once the final buzzer sounded, Arkansas was +15 in free throw attempts (25-10) and +16 in terms of free throws made (22-6).
• Williams racked up a 10-point, 15-rebound double-double for Arkansas in the win while Notae notched a game-best 18 points. It was Notae's defensive efforts, too, which gave the Aggies fits as he finished with eight of Arkansas' 12 total steals.
• NM State head coach Chris Jans' record fell to 1-3 in NCAA Tournament games, 1-2 against SEC foes and 7-7 against Power Five clubs through his five-year tenure in Las Cruces.