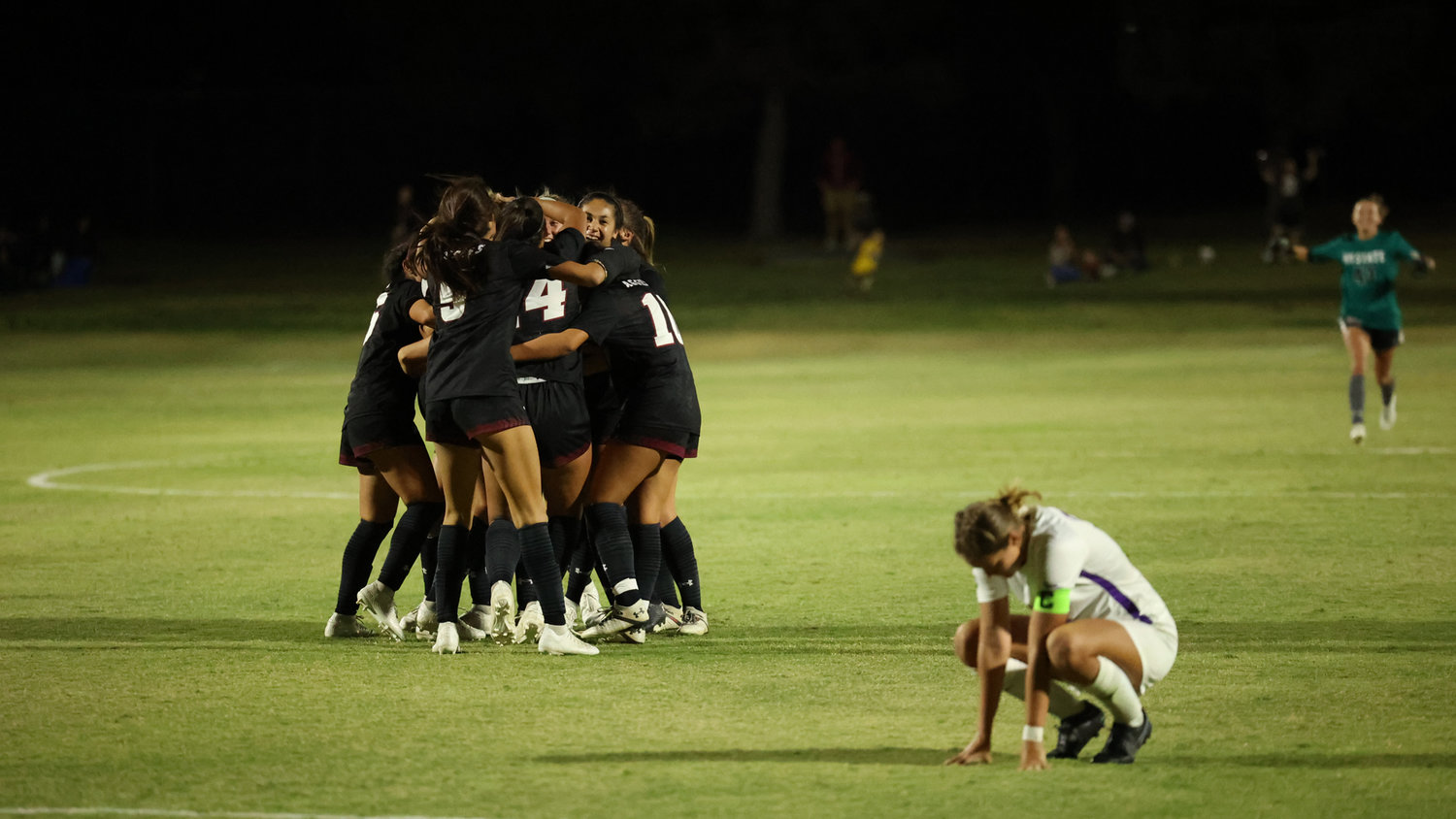 Saturday morning, there were two WAC women's soccer teams who had not suffered a loss in league play.

By the time Saturday night rolled around, that number had been cut in half thanks to the right foot of Grace Olson.

Fifteen seconds away from settling for one of a possible three points, NM State's fortunes literally fell at the feet of Olson who sailed a high-arcing shot past a soaring Jordan Ferguson and the Aggies used that bar-down golden goal to secure a 2-1 double-overtime triumph over GCU at the NM State Soccer Athletics Complex.

Just hours after learning they had made the cut for the 2021 WAC Tournament by virtue of a Dixie State win over Seattle U, the Aggies went out and avenged a 6-0 setback to the Lopes which occurred two weeks ago.

SCORING SUMMARY
59' | The third GCU corner kick in the span of 12 minutes wound up paying off for the visitors. The Lopes' scoring leader Marleen Schimmer booted a ball right toward the mouth of the Aggies' goal and Hannah Edwards did the rest. Edwards' header was pushed past NM State goalkeeper Makenna Gottschalk who got caught up in the scrum at the front of the net and the Lopes took a 1-0 lead.
78' | A 25-yard strike represented the Aggies' equalizer. After settling down a ball from Mya Hammack, Loma McNeese crossed up her defender and gave herself enough daylight to unleash a lethal right-footed strike past a diving Jordan Ferguson and into the upper right corner of the net to knot matters at 1-1.
110' | Down to just 15 seconds to go in the extra session, McNeese was on the attack for the Aggies again. After getting tripped up in the Lopes' box, GCU's clearance try wound up right at the feet of a wide-open Olson. Her right-footed blast hit the top of the crossbar and bounced directly down over the line to seal the Aggies' win.

KEY PERFORMERS/STATISTICS OF NOTE
• Olson's goal was her first of the season and the second in the collegiate career of the Aztec, N.M., product.
• The Aggies evened their record in overtime games at 2-2 thanks to Olson's strike.
• NM State put an end to GCU's eight-match unbeaten streak. The Aggies handed the Lopes their first WAC setback of the season and their first loss since a 2-0 shutout loss to New Mexico. Saturday night's win for the Aggies also marked the conclusion of the Lopes' 14-match unbeaten streak in regular-season WAC contests.
• The two goals scored by the Aggies matched the highest total scored by an opponent against GCU this season.
• GCU was ranked seventh in the latest edition of the United Soccer Coaches NCAA Division I Pacific Region poll.
• Gottschalk stopped seven of the eight on-target shot she faced in the double-overtime duel. With those seven saves, her career save total moved up to 137 - fourth all-time in the history of NM State women's soccer.
• NM State is assured a spot in the 2021 WAC Tournament thanks to a Dixie State win over Seattle U earlier in the afternoon as well as its win over the Lopes. Two of the teams in the WAC's West Division - California Baptist and Dixie State - are ineligible for the league's postseason tournament.

COMING UP NEXT
• NM State's three-match home stand to conclude the regular season continues Thursday night at 7:00 p.m. when the Aggies host WAC West Division co-leader Utah Valley. The second skirmish this season between the Aggies and Wolverines is set for 7:00 p.m. that night.